After arriving at its new home in Weston-super-Mare, SEE MONSTER, a decommissioned North Sea platform, is about to start its transformation into a large-scale public art installation, which is said to have the potential to become one of the UK’s largest public art installations. As it reuses industrial structures and is going to include renewable energy, the project is expected to spark discussions about making use of such things in the future.

The project about reimagining and rehabilitating a retired North Sea industrial structure into what is described as the world’s first and only repurposed offshore platform was unveiled in October 2021, when the town of Weston-super-Mare was selected as one of ten locations across the country to host this flagship, national arts and culture installation.

The North Somerset Council stated at the time that the work required to repurpose this offshore platform into SEE MONSTER was expected to take approximately two months and start in the spring of 2022.

Earlier this month, it was revealed that SEE MONSTER was scheduled to arrive by sea at Weston-super-Mare on Tuesday, 12 July 2022. At the time, NEWSUBSTANCE described the transformation of this platform as a “world-first that is set to become one of the UK’s largest public art installations,” aiming to inspire global conversations about the repurposing of large industrial structures and design-led solutions to sustainable futures.

The platform arrived at its destination in Weston-super-Mare on Wednesday, 13 July 2022, to take up its new lease on life. The 450-tonne platform was transported on a flatbed barge to its new home at the Tropicana and lifted by a crane over the seawall onto pre-constructed legs on 16 July 2022 to “ignite the arrival of SEE MONSTER.”

According to NEWSUBSTANCE, “as a pioneer towards a greener future, SEE MONSTER will explore the concept of inherited structures, be those physical, social, or environmental. What do we do with the structures we inherit? And what actions can they inspire?”

This platform is anticipated to be transformed into a public art installation within the next few weeks and once completed, the entire construction is expected to be 35 metres tall at its highest point.

After the project gets open to the public, it is said that visitors will be able to “pass behind the thrashing cascade of a 12-metre waterfall and under the shimmering scales into the cavernous underbelly of the beast.” In addition, NEWSUBSTANCE elaborated that within the “wild garden” visitors will be able to find “hidden routes to explore the rehabilitated Monster, where embedded throughout will be new approaches to a more sustainable and greener future.”

SEE MONSTER is scheduled to be completed and opened to the public during the last weekend of August and its creators say that “as a creation of new from old, the regeneration of the rig, transformed from its former life, will champion the role of re-use and creativity within our future.”

This project, which won support from the North Somerset Council, is being brought to life by NEWSUBSTANCE Collective and includes Leeds-based creative studio NEWSUBSTANCE in collaboration with Dose of Society, REDHOUSE, Rocket Women, Empowering Women with Tech, Ivan Black kinetic sculptor along with representatives from the British Antarctic Survey. 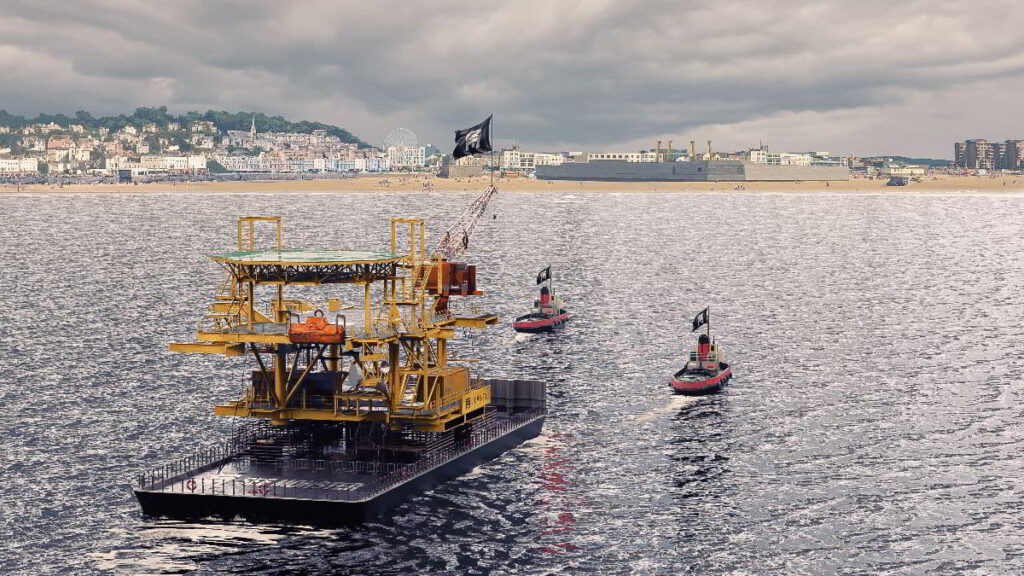