The US Port of Oakland has exceeded all its original goals set in the master plan for the port’s long-term commitment to reducing the air quality and health risk impacts of its maritime operations, according to the results of the emissions inventory.

Last week, the Port of Oakland staff announced the findings of the 2020 Seaport Air Emissions Inventory which included six categories of mobile sources: ocean-going vessels, harbour craft such as tugboats, cargo-handling equipment, on-road trucks, locomotives and other off-road equipment, such as construction equipment.

The inventory findings showed that the port surpassed all its original goals set in the Maritime Air Quality Improvement Program (MAQIP), the port’s comprehensive master plan to reduce harmful emissions from maritime operations at the Oakland Seaport, setting 2005 activity as the baseline for comparison and 2020 the final year for reaching the goals.

As the results indicate, the port and its partners reduced diesel particulate matter emissions (DPM) by 86% over 2005 levels. The goal was an 85% drop in DPM. Nitrous oxide (NOx) emissions were cut by 40% and sulfur oxides were slashed by 95%. All these reductions were beyond the original goals.

According to the port’s Environmental Planner/Scientist Tracy Fidell, the reductions for harmful emissions were achieved despite an increase in cargo volume.

Fidell added that container throughput at the Oakland Seaport was almost 8% higher in 2020 than in 2005 and that the port is moving cargo more efficiently and generating fewer emissions per container compared to the year 2005.

“This huge reduction in harmful emissions is a tremendous achievement,” said Richard Sinkoff, the port director of Environmental Programs and Planning. “The Port, its partners and the community worked together for more than a decade to improve air quality and support public health through major investments, innovation and commitment”.

Looking ahead, the port aims to achieve zero emissions at the Oakland Seaport through a pathway to eliminating harmful emissions from maritime activities established in the Seaport Air Quality 2020 and Beyond Plan revealed in 2019, Sinkoff concluded.

The 259-page plan envisions zero-emission operations in the future, calling for changes in equipment, operations, fuels and infrastructure at the seaport.

Some of the projects outlined in the plan are converting port fleet vehicles and equipment to zero-emission and installing electric infrastructure at container terminals. 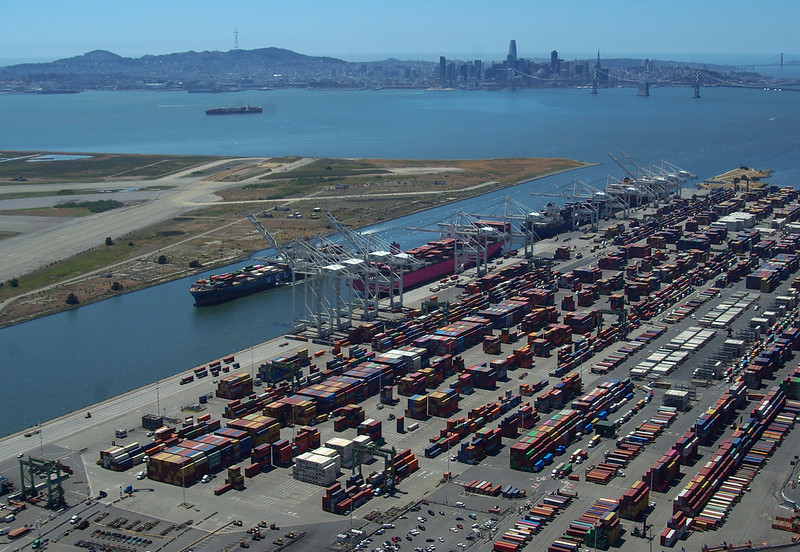