Ever Given made headlines yesterday following its grounding in one of the key bloodlines of the global trade, namely the Suez Canal.

Specifically, 12% of world trade takes place through the Suez Canal, and estimates from Bloomberg indicate that the blockage has halted $9.6 billion worth of traffic a day.

The colossal ship, spanning 400 meters in length and 59 meters in width, ran aground on March 23, at 6 nautical miles from the southern entrance of the canal. At 20,000 TEU capacity, the ship falls into the category of the world’s largest containerships.

Gusting winds of 30 knots and poor visibility are believed to be the likely cause of the grounding, which left the boxship stuck sideways in a narrow point of the waterway.

It is believed that it would take at least two days to remove the ship and resume shipping in the canal. An external salvage team is also due to be appointed, with reports emerging that Smit salvage experts would be hired for the job.

The ripple effect of the blockage

As the Suez Canal tugs resume efforts to free the ship, which has been partially refloated since Tuesday, the global trade is already feeling the impact.

According to the images from the scene, dredgers are working on freeing the ship’s bulbous bow from the canal’s sand banks, with several tugs in position to pull it free.

Initial estimates show that long tailbacks have been created on the waterway, stopping vessels from passing and causing delays.

Data from VesselsValue indicates that there are 157 ships waiting in and around the waterway for the convoys to resume.

According to Wood Mackenzie VesselTracker, the largest impact is on container shipping, with the likely outcome being a spike of cargo into the main ports in Europe.

However, Wood Mackenzie estimates that there are a total of 16 laden crude and product oil tankers that are expected to transit the canal delayed by the incident, amounting to 870Kt of crude and 670kt of clean products.

“These ships are currently in the canal itself or waiting at either the North entrance to the Suez Canal (Port Said Anchorage and Great Bitter Lake Anchorage) or at the Southern Suez Anchorage. There are several vessels which are located to the south of the canal entrance which we believe are scheduled to discharge at various southern Suez ports. Our data suggests that there have been no cargoes diverted to alternative routes such as around the Cape of Good Hope,” Wood Mackenzie principal analyst Mark Williams said.

As a result, oil prices already rose $2 per barrel on the news of the blockage, but stocks of both crude and products are high in the Atlantic basin, Wood Mackenzie vice president Ann-Louise Hittle explained.

She believes a few days of delays in crude or product travelling through the Suez Canal to the west (Europe/Americas) should not have a prolonged impact on the Atlantic basin market.

“After the canal reopens, the crude market will shift focus towards the April 1 OPEC+ meeting to determine production levels for May,” Hittle added.

“If the blockage is prolonged, given the weakness in European demand for middle distillates and low refinery utilisation rates, oil product trade flows from Europe/Mediterranean to East of Suez will suffer a greater impact, reducing availability of naphtha, petrochemical feedstocks and fuel oil to Asia. This would be supportive for Asia product prices and widen the West-East arb in the near term,” Williams continued.

When it comes to LNG, at least 15 ships initially due to transit the canal on the same day were forced to wait at anchorages. More have arrived since, creating a build-up of vessels close to the Northern and Southern entrances and within the canal itself.

The Suez Canal is a key channel for LNG ships – with around 8% of global LNG trade going through.

Woodmac’s principal analyst Lucas Schmitt believes there will be a limited impact on the LNG market due to the congestion.

“Only a handful of LNG cargoes were in the close vicinity of the Suez Canal when the incident started. At this stage, we don’t expect major bottlenecks, unless the situation drags on.

“The impact could be greater if the disruption lasts longer, as the recent delays at the Panama Canal illustrated. However, the timing of this incident means it will have less impact on prices than that of the Panama since we’re entering the shoulder season for the LNG market,” Schmitt said.

“Charter rates are currently low – around 30 k$/d – but could tighten up (reflecting the additional tonne-mile needed to bypass the canal) if the disruption lasts. Shipping optimisation might be complicated, particularly for ships already within the Mediterranean and Red Sea. Further delays would impact both loading and discharge schedules and disrupt some flows, mostly to the European market.”

According to Wood Mackenzie’s VesselTracker – as of 24 March, one LNG vessel is “trapped” within the canal. The Golar Tundra loaded at Egypt’s Idku on 21 March and was transiting to Asia. At the Southern entrance, the Rasheeda is awaiting to transit with a shipment from Qatar.

As of 5:50 PM CET, there are three LNG tankers (two full, one empty) waiting or approaching the south side of the Canal, two full tankers waiting at the north entrance, and the full Golar Tundra is stuck in the middle.

Meanwhile, at least one US export, the Pan Americas, has potentially been rerouted in the North Atlantic towards the Cape of Good Hope, away from its previous heading towards the Mediterranean/Suez. 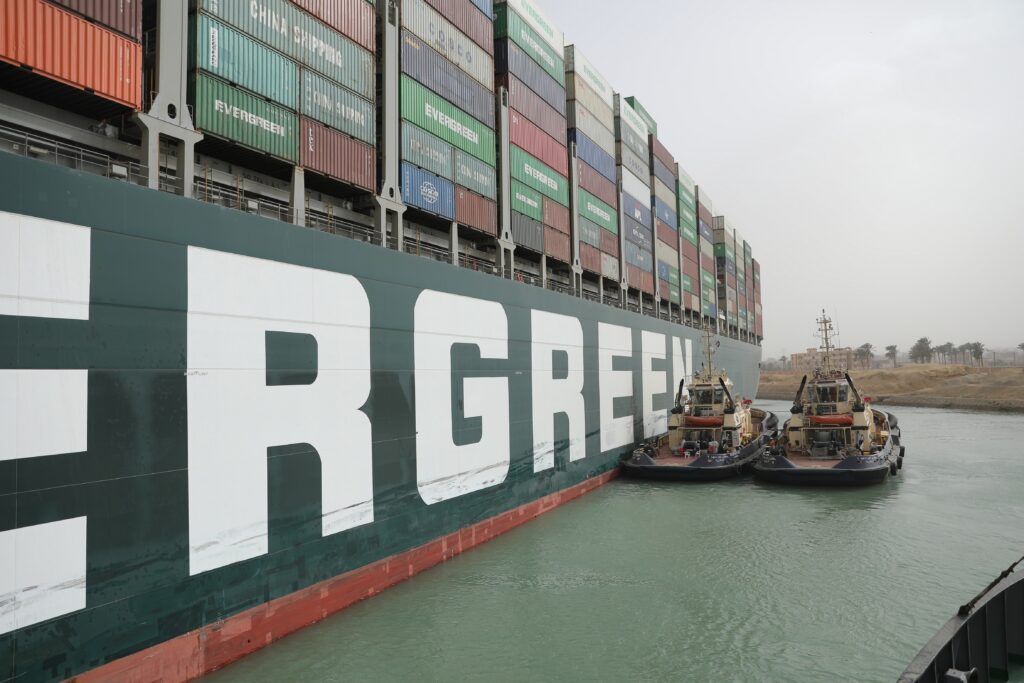 Ever Given refloated after a week of blocking ships in the Suez
Posted: 20 days ago
One of the world’s largest containerships blocks Suez Canal
Posted: 24 days ago
Two salvage firms rush to refloat Ever Given as logjam in Suez enters 3rd day
Posted: 23 days ago