Three crew members have been injured following a last week’s explosion on board a Hong Kong-flagged bulk carrier off Cornwall.

The 93,400 dwt Great Aspiration suffered the explosion in a cargo hold due to welding activities on April 17, 2019, according to data provided by VesselsValue.

Three seafarers, Chinese nationals, were evacuated off the Post-Panamax some 30 miles off Lizard Point after suffering significant burns, the UK’s Maritime & Coastguard Agency said in a statement.

HM Coastguard’s search and rescue helicopter from Newquay was sent and the three were taken to Derriford Hospital for treatment. Two of the injured crew were flown to a specialist burns unit in Swansea.

One crew member is believed to have subsequently died.

There was no pollution reported.

Following the incident, the 229-meter bulker was moved from Mount’s Bay to Falmouth for a “fuller assessment of the damage to the vessel’s hatches.”

As of April 23, 2019, Great Aspiration is moored in Rotterdam, the Netherlands, the vessel’s AIS data shows.

Built in 2010, Great Aspiration is owned by China’s Sinotrans Shipping. 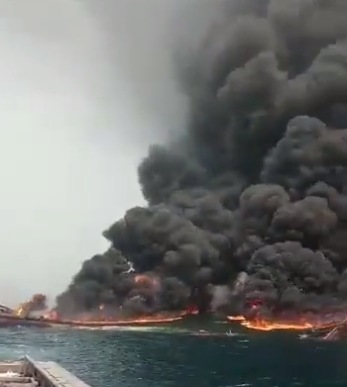