There are three major ship types to keep a close eye on in 2019, based on what has transpired this year.

The Capesize market has seen a surprising amount of volatility this year as the prospect of a trade war between the US and China has created market uncertainty for buyers of raw materials. The market took an unexpected dip in autumn as a result, which then disrupted what was otherwise a strong year for dry bulk ships.

“The prospects at the start of 2019 are fundamentally bearish. There is a strong seasonal dip in January and February in ton mile demand, and the fleet size has been gradually increasing,” Smith said.

Companies like GoodBulk and Seanergy Maritime believe that Capesize market, despite being the most volatile dry bulk sector, offers high returns but also exposes owners to high risks as well.

GoodBulk’s management is optimistic that supply and demand fundamentals in the Capesize market will remain strong supported by historically low fleet growth and growth in tonne miles.

During the Q3, six Valemaxes were delivered from Chinese shipyards, bringing the total new-built deliveries for the year to up to 15 Valemaxes, with 18 still left on the order book, primarily for 2019 delivery. Overall, over the past year, the Capesize fleet has grown by 2.9%, BIMCO’s data shows.

According to Maritime Strategies International (MSI), Capesize spot rates could rise above USD 25,000 per day in Q4 if iron ore exporters meet planned shipment targets, with the upside cascading into the Panamax market as shippers consider splitting ore cargoes. 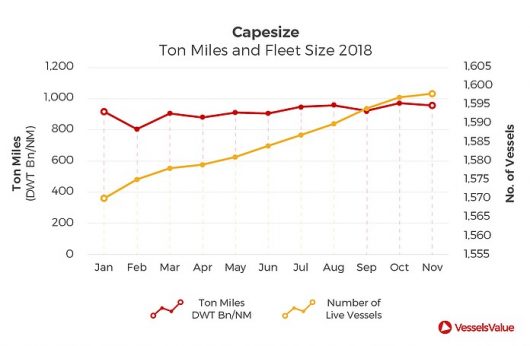 Smith believes the LNG market faces a more complex outlook. The global thirst for cleaner fuels has continued to increase and hire rates for ships remain near USD 200k/day.

“However, a warm winter so far in China has depressed some of the immediate demand, and ton miles have nudged downwards. The long-term prospects for this market are promising, but the market has likely peaked for now,” he said.

The outlook for the next three years shows that a total of 91 mtpa of new LNG production capacity is expected to start up in 2018 to 2021.

Out of this, close to 50 mtpa of the new production is out of the US, which is expected to increase average sailing distances. On the demand side, shipbroker reports show that the current orderbook for LNG vessels above 100,000 cbm (excl. FSRU and FLNG) counts 93 vessels, of which 37 are potentially available for contract.

However, the LNG production scheduled to start up during the three-year period will most likely require more vessels than the current available tonnage and orderbook during periods of high ton-mile demand. 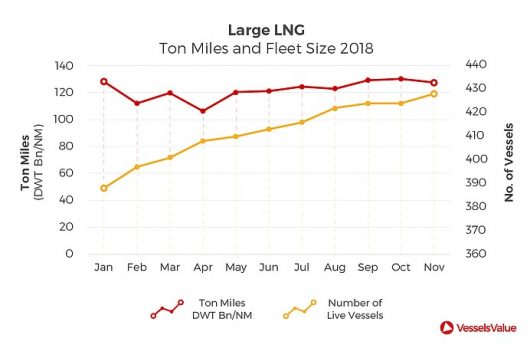 The MR1 market appears to be structurally dropping after improvements in cargo volumes in 2016 and a steady 2017. The fleet size has started to contract though, which may help offset some of the drop in demand, Smith said.

On the supply side, eight MR orders have been placed at a South Korean shipyard since August. The estimated fleet growth for product tankers this year is 2.4% – the lowest level since 2012. In addition, BIMCO forecasts that 2019 fleet growth will remain fixed at 2.4%, with deliveries and demolitions both falling. 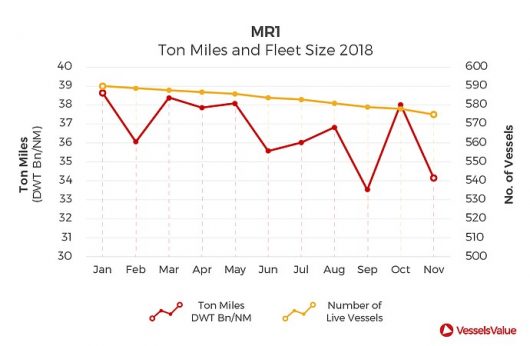