Pilot LNG has received a Letter of Interest (LOI) from the Export-Import Bank of the United States (US EXIM) to provide development financing for Pilot’s Galveston LNG bunker port project.

The financing for the Front End Engineering & Design (FEED) will be provided through the EXIM medium-term engineering multiplier program (EMP).

On January 19, 2021, Horn & Watson Capital Strategies, acting on behalf of the GLBP project, received a LOI from US EXIM for financing support of US goods and services associated with the GLBP project.

The Galveston Bay region, designated as a non-attainment area1 due to its relatively poor air quality, will particularly benefit from the lower emissions associated from using LNG as a marine fuel.

The LOI form the US EXIM marks another positive milestone in Pilot’s project development.

With the preliminary Waterway Suitability Assessment application for the facility submitted to the US Coast Guard in December 2020, the project continues to advance towards full approval and Final Investment Decision (FID) for the development of the GLBP project on Pelican Island, Texas, by late 2021 or early 2022. 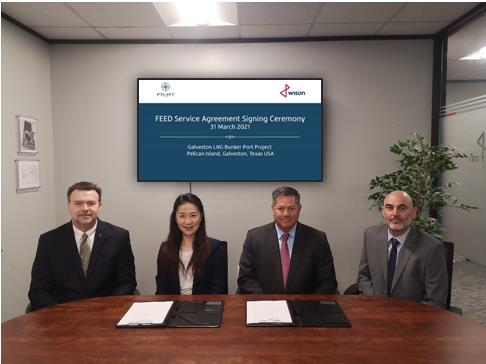