Uncertainty and volatility continue to cast a shadow over the oil and tanker market as December 5 deadline for the oil price cap for Russian oil expires.

Today, all eyes are set on Russia to see what vessels will be loaded and where they would head as Moscow defines its steps in response to the moves from the West.

Specifically, the Group of Seven (G7) nations and Australia are joining the EU in setting a $60-a-barrel cap on Russian seaborne crude oil. The move has been described as a way of cutting Russia’s financial power in the wake of its aggression against Ukraine. The coalition said that the cap would also prevent a spike in global oil prices after an EU embargo on Russian crude takes effect on Dec. 5.

One of the reasons behind the cap is also said to be giving additional bargaining power to buyers in third countries with minimal disruptions to crude flows. Expectedly, Russia reacted with a threat of suspending oil supplies to countries that back the cap.

The implication of the price cap on the oil and tanker markets is not yet clear, according to Poten&Partner’s weekly tanker opinion, as Russian oil has been sold even below $50 per barrel before the cap’s entrance into force.

“At the moment therefore, the implementation of a $60/barrel price cap may have no impact on Russia’s oil revenues. It could look like business as usual, with the exception that Russian oil will no longer be sold to EU countries,” Poten said.

“While Russia has always said that it will not sell to countries that are participating in the price cap, the pragmatic approach for the Kremlin will be to cooperate as long as the price cap is above the market price (for Russian grades).”

Poten added that if Russia collaborates, it will be able to continue to use the international tanker fleet and EU maritime services, including insurance. However, Russia may want to use the opportunity to bolster the importance of its own maritime cargo insurance.

As explained, the uncertainty around the timing and the level of the oil price cap created significant volatility in the tanker markets.

“In the runup to Monday’s deadline, it appears that both Russia and its oil customers around the world were incentivized to put as much oil on the water as possible to avoid running afoul of shipping restrictions on December 5. As a result, the tanker market went through the roof. Rates in all segments reached multi-year highs in recent weeks. Last week, this trend reversed. Oil companies, refiners and traders cut back purchases from Russia as they could no longer take delivery of the oil prior to the deadline and the uncertainty around the price cap made it impossible to plan for the world after December 5,” Poten added.

The next couple of weeks will tell

The situation is expected to become clearer in the next couple of weeks as the dust from the situation settles. It will also show what markets will Russia tap into to export its crude oil as well as what directions would the EU be taking.

“As such, the next few weeks will be critical, revealing how strong Russian determination not to sell its barrels under an arguably reasonable price cap level is, the appetite for Russian crude in third countries as well as the potential capacity of the tanker fleet willing to service price capped and/or non-price capped exports of Russian barrels,” Gibson Shipbrokers said.

“What will happen on the crude side, will offer an indication of what is likely to happen when the EU ban on imports of Russian clean and dirty products comes into effect on 5th of February.”

According to Gibson, there have been some differences between Russia’s crude oil and clean petroleum product exports.

“Russian crude exports to the UK and EU countries in Northwest Europe (which in the past, accounted for the vast majority of Russian trade to Europe) have been in steady decline since spring, falling to just 120 kbd in November from 1.27 mbd in January/February 2022,” Gibson said.

“In contrast, Russian clean exports to the UK/EU show a considerably slower rate of decline, with the trade averaging 0.77 mbd in October versus 1.2 mbd during the 1st two months of this year. Furthermore, exports actually increased to 1 mbd in November, which suggests that Russia could be maximizing product exports until the February deadline.”

As informed, there has been no major reshuffle in Russian CPP export flows, with some increases only seen in shipments to the Middle East, West Africa and Latin America, and in trading of Russian products via storage terminals in Northwest Europe. Gibson hinted that Russia could find it more difficult to find the same level of demand in third countries as it has found this year for its crude.

“After all, oil demand in likely markets where Russia can place its products is considerably lower than consumption in advanced western economies. If that’s the case, Russia could be forced to compensate by increasing crude exports and/or to reduce its refining runs,” the shipbroker explained.

Poten believes that the EU and Russia’s strategies moving forward will likely lead to more ton-mile demand for tankers in 2023.

“In addition to more ton-mile demand, we may see more inefficiencies and lower fleet utilization if the dark fleet gains market share in the Russian export market. Newbuilding deliveries in 2023 are also muted, so this will set the stage for a continued strong, but volatile tanker market next year,” Poten said.

The product tanker market is also expected to see further increases in tonne miles, with the CPP trade into Europe already on the rise, Gibson said,most notably from the Middle East, India and the Far East, supported by Russian sanctions.

“When the time comes for Europe to fully wean itself off Russian products, the latest trends in global product flows can only accelerate,” Gibson added.

As oil demand starts to recover post-Covid, further pressure on the tanker markets is expected from OPEC+ production cuts which are set to continue into 2023. China, as always, is another market to keep a close eye on especially in the wake of the latest protests over the government’s zero-Covid policy. 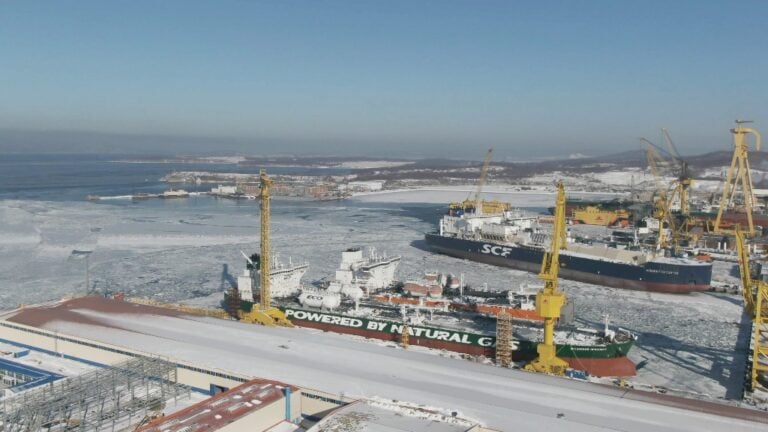