Dutch shipping company ALP Maritime Services has been selected by a joint venture between TechnipFMC and JGC to provide a spread of five vessels related to the Coral South project offshore Mozambique.

On arrival at the offshore site, the three vessels will be joined by two additional vessels from the ALP 19,000 bhp fleet.

Together, the vessels will keep the 432-meter-long Coral Sul FLNG accurately in position, while a mooring vessel connects the pre-laid mooring chains to the FLNG.

On completion of the mooring operation, two of the five ALP-vessels will continue to support further operations on site.

Arjan van de Merwe, project manager of ALP, said: “ALP is very proud to have been selected for this project. It is the first deepwater FLNG build to date and it is the first floating production plant to be installed in Mozambique and on the all African east coast.

“Our vessels have the endurance to perform the towage non-stop while complying with stringent in-field vessel specifications expected when operating in close vicinity of the FLNG for extended duration.

“This contract involves a combination of our 24,400 bhp units and our 19,000 bhp units, tailored to our client’s requirements. Within each vessel segment we operate a number of vessels.

“That offers ALP optimum vessel scheduling flexibility while offering our client guaranteed availability whenever the FLNG is delivered at the shipyard and ready for departure.”

The eight-story FLNG accommodation module, which will house up to 350 people, was also ready to be lifted and integrated with the hull system. Fabrication activities are also well underway for the 12 gas treatment and LNG modules, with all main equipment ready for integration and first deck stacking executed.

It is worth stating that the operator of the project, Italian oil major Eni, said at the time that the launch marked the timely progress of the project, which exceeded 60 percent completion and was in line with production start up by 2022.

The Coral South project is located in the exploration concession of Area 4 in the Rovuma basin, which will put in production 450 billion cubic meters of gas from the giant Coral reservoir.

It is worth reminding that the contract for the Coral South FLNG project was awarded to TechnipFMC – together with JGC Corporation and Samsung Heavy Industries – back in June 2017. 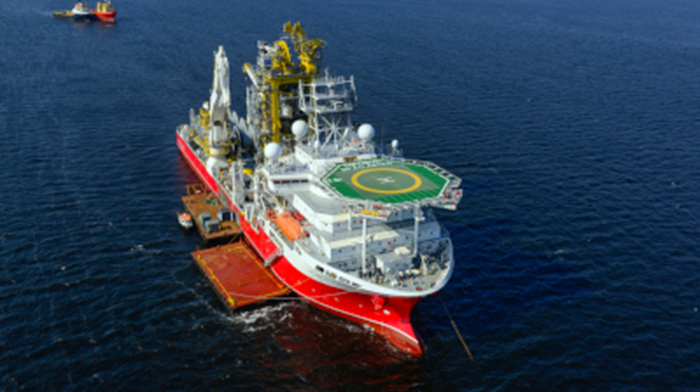