The Corps oldest dredge wrapped up another successful dredging season on the Middle Mississippi, January 8.

The U.S. Army Corps of Engineers St. Louis District’s Dredger Potter, built in 1932 during the Great Depression did not let age stand in her way as she moved more than 3.2 million cubic yards of sediment this year – enough to cover a football field to a height of 1,500 feet.

The Potter and her crew of 50 began work on the muddy Mississippi River, August 1 aiding the St. Louis District in achieving its mission of maintaining a Congressionally-mandated 9-foot deep, 300-foot wide navigation channel.

Within the St. Louis District, dredging is performed on 300-miles of the Mississippi River, from Cairo up to just below Hannibal, Missouri, as well as 80 miles of the Illinois River and 36 miles of the Kaskaskia River.

The 240-foot long, 46-foot wide dustpan Dredger Potter was originally a steam-powered paddlewheel before her transformation to a more modern diesel-electric power in 2001.

“Dustpan dredgers are very efficient on the main stem of the Mississippi River. They can move easily in and out of traffic, and were specifically designed to move the sand that’s in the Mississippi River,” Lance Engle, dredging project manager with the St. Louis District said.

Bearing the name, Thomas N. George, a new spill barge joined the Potter for its inaugural season this year.

The flexible floating pipe allows the dredged material to be placed independently of the dredge as it moves to avoid fleeting areas and or for more versatility around well-used areas of the river.

November was a busy month

While nearly finished at the mouth of the Kaskaskia River, November 14, the Dredger Potter experienced a D-ring failure (a critical link in the suction ladder lifting chains). When the D-ring failed the Dredger Potter’s suction ladder dropped and became stuck nearly vertical under the dredge. The Potter’s crew worked tirelessly and five days later the ladder was recovered and secured without any additional damage.

Dredger Master Randy Jowers, St. Louis District Service Base staff and Marine Design Center developed an interim repair, and the Potter was back to work status by November 22, just in time to face another crisis on the river.

When engineers discovered erosion along the overflow dike at Lock and Dam 25 in Winfield, Missouri, the Dredger Potter and her crew answered the call. With no contract or government dredgers available, the Potter was willing and available to assist with the emergency repairs before flooding could threaten the stability of the dike. If flooding causes the dike to fail, barge traffic on the river could come to a standstill.

With repairs to the ladder rigging complete the Potter and her crew immediately departed for Lock and Dam 25, November 22.

By November 23, the Potter had reached her destination. Upon arrival her crew began the process of setting up the 2,400-foot flexible pipeline. The flex pipe coupled with the spill barge gives the dredger team the ability to reach farther and aim more precisely when placing material. Two days later, the Potter was already placing material into the scour hole below the Lock 25 spillway. 258,000 cubic yards of dredge material was placed into the scour hole and in an adjacent stockpile.

“Without the flexible dredge pipe and the spill barge Thomas N. George, our only other option would have been dredging by mechanical means with a clamshell dredge,” said Mike Rodgers, project manager for the emergency repairs at Lock and Dam 25.

The clamshell method would have moved roughly 2,000 cubic yards of material a day, with an estimated timeline of nearly three months to complete. Employing the Thomas N. George and flex pipe, the Dredger Potter team moved more than 20,000 cubic yards a day, completing the work in about ten days.

“With the flex pipe and the Thomas N. George spill barge, we have a lot more options to place of material,” Rodgers said. “Without it, we wouldn’t have completed the permanent repair in time for the spring flood season.”

Hardest working octogenarian on the river

For more than 80 years the Potter has remained true to her mission, making navigation possible for towboats to move commodities up and down the Mississippi.

St. Louis is the third largest inland port by tonnage, and commercial navigation thrives on the St. Louis District’s stretch of the river thanks in large part to the hard work of the Potter crew.

Operating 24 hours a day, the crew is organized into three watches, with two alternating watches while the third is off duty. There is one First Mate, three Second Mates and four Deckhands on watch at all times.

“If it were not for the dedicated Potter crew and Service Base staff, the Dredger Potter could have easily been down for repairs for a month, which would have been disastrous to maintaining the navigation channel and supporting the emergency scour repair at Lock 25 spillway,” said Engle.

A typical dredging season in St. Louis District runs from July to December, but can change based on river conditions. As recently as the 2012-2013 dredging season, more than 8 million cubic yards of sediment was dredged in a six month period to address low water conditions. 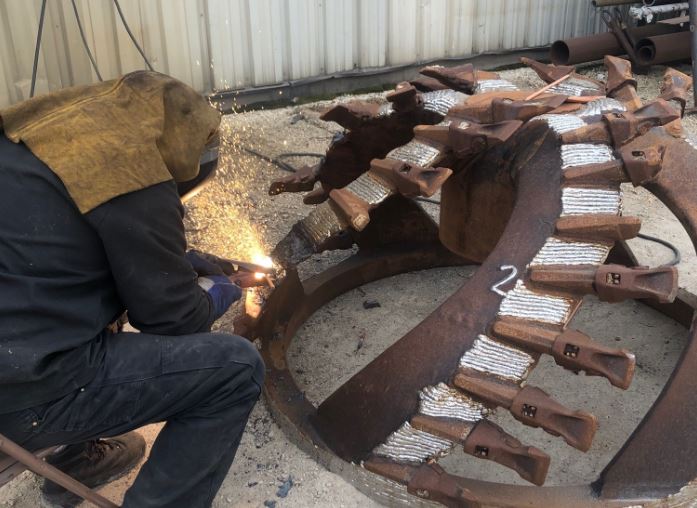