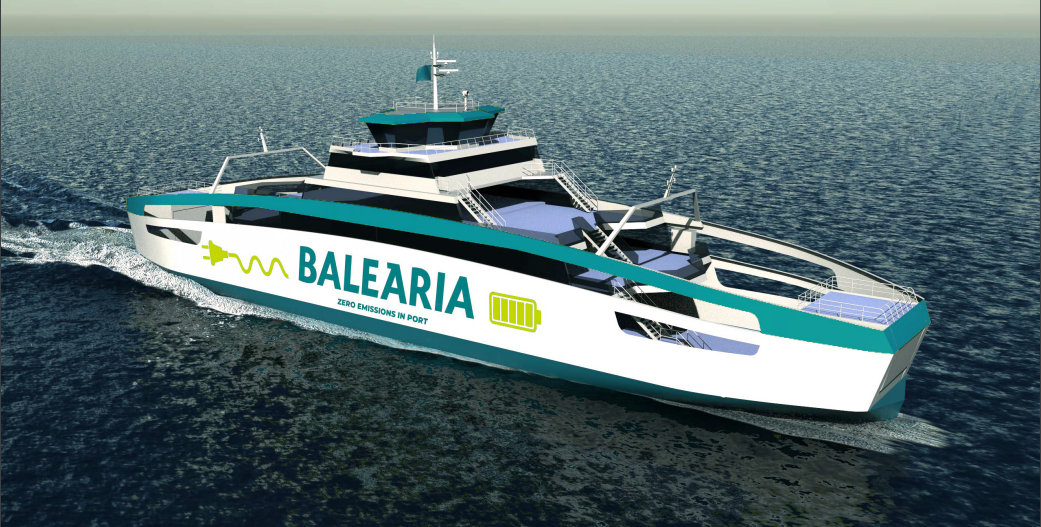 Spanish ferry operator Baleària has embarked on a project to build the first electric passenger and cargo ferry that will be pollution free during port stays and approaches and incorporate green hydrogen on an experimental basis.

This is a new ship concept for the Ibiza-Formentera route which, in addition to promoting a more eco-efficient and sustainable journey, will include a test laboratory for the use of green hydrogen, Baleària revealed.

The new vessel, which is being built at the Armón shipyard in Vigo, will be the first to have zero emissions during entrances, departures and stays in the docks of Ibiza and Formentera, thanks to the installation of rechargeable electric batteries that will be topped up during the journey, according to Baleària.

In addition to allowing the use of batteries in port, the diesel-electric propulsion system will improve propulsion performance and reduce emissions and noise, as well as maintenance.

The ferry, which will connect the Pityusic Island in just one hour, will improve air quality in the ports and surrounding areas by reducing greenhouse gas emissions by 80% compared to other ships operating on this route.

“This ship is an important step forward and for us it has an emotional component because, despite being small and simple, it aspires to be the most sustainable ship in the fleet, as it is electric and incorporates hydrogen technology on an experimental basis,” Adolfo Utor, president of Baleària, commented, adding that the newbuild will be a key ship for supplying essential services to Formentera.

The ferry will be able to carry 350 passengers. In terms of freight transport, the hold will house up to 14 lorries. Additionally, the vessel will be 83 metres long and 15 metres wide, and will be able to sail at 12.5 knots.

Moreover, it will be double ended, in other words, it will operate both fore and aft, which will speed up embarkation and disembarkation operations and manoeuvres in port.

The electric ferry is scheduled to start operating in the summer of 2023.

The innovative newbuild to join the Baleària fleet will be a test laboratory for green hydrogen.

A 100 KW compressed hydrogen fuel cell, the largest currently available, will be installed to carry out a pilot experiment in the use of this more eco-efficient energy, which could eventually be used for on-board electricity consumption.

“Our goal is to use this ship as a small-scale test laboratory to learn about this fuel and apply this knowledge in the long term, when a more mature and stable storage system than the current compressed hydrogen is expected to be available,” Utor noted.

Baleària also participates in the European Green Hysland project, which aims to turn Mallorca into the first green hydrogen hub in southwest Europe.