The European Union (EU) should approve additional ship recycling facilities outside Europe to meet the demands of the global shipping industry, a report commissioned by BIMCO shows.

The “Report on the European List of Ship Recycling Facilities” is the third edition by Marprof Environmental and was first commissioned by BIMCO in 2019. The second followed in 2020.

Now, the latest and third edition confirms that so far, the inclusion of non-European ship recycling facilities on the EU list has provided limited potential for large-scale recycling.

EU member state facilities, in general, provide either bespoke local solutions to a niche recycling market or are focussed on offshore decommissioning, according to BIMCO.

This means they are not dedicated to the recycling of large ocean-going ships and therefore do not have sufficient capacity. Bearing this in mind, Turkey comes up as the only major ship recycling nation contributing significant capacity to the EU List.

However, as the report was going to publication, a September 2022 draft of the EU List was published, testifying to two ship recycling facilities in Türkiye being removed from the list due to failings.

Earlier on, the EC investigated two fatal accidents that occurred in Turkish EU List yard (Simsekler). The assessment concluded that the causes of the accidents were due not only to individual actions, but rather to underlying organizational factors that the yard should focus on to improve their control of risk.

The EC’s request to be kept informed of the measures taken in this respect was not followed up by the facility and, consequently, the EU List was updated to remove this facility.

“Today, there are still no facilities from the main recycling states such as India, Bangladesh or Pakistan included on the EU list to meet the demand for recycling of larger ships. Many yards have made significant efforts toward upgrading their facilities,” said BIMCO’s Secretary General and CEO, David Loosley.

“We believe focus on getting some of these facilities added to the list should be increased if they meet the standards of the Hong Kong Convention, which we believe should be ratified as soon as possible.”

The report also highlights that the strategic importance of ship recycling within the overall strategy of the EC is becoming increasingly clear and important. According to the EC, the European New Green Deal and the supporting circular economy are core elements of its attention and spending for the foreseeable future.

“BIMCO agrees there is significant potential for the ship recycling industry to contribute to the circular economy, as it supplies large quantities of scrap metal to the steel and iron industries, thereby reducing the need to produce primary metals. A study commissioned by the World Bank in 2009 found that Bangladesh satisfied 50% of its steel needs from national ship recycling, to take an example,” Loosley noted.

The European Green Deal is a set of policy initiatives by the European Commission (EC) with the overarching aim of making Europe climate neutral.

The EC adopted a set of proposals to make the EU’s climate, energy, transport and taxation policies fit for reducing net greenhouse gas emissions by at least 55% by 2030, compared to 1990 levels.

Last month, the EC launched a call for proposals under the Connecting Europe Facility (CEF) for Transport programme which makes available over €5 billion for European transport infrastructure projects.

The projects funded under this call will help increase the sustainability of the transport network, putting the EU on track to meet the European Green Deal objective of cutting transport emissions by 90% by 2050. 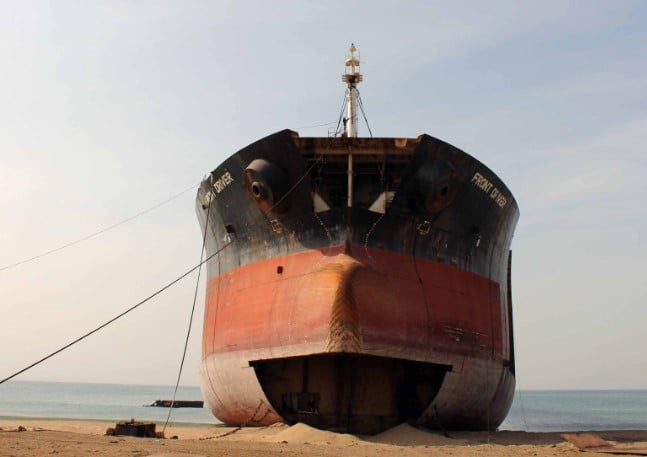 EU axes two Turkish yards from approved shipbreaking list
Posted: about 1 month ago
Urgent need for change in ship recycling sector: 80% of ships scrapped on South Asian beaches
Posted: 2 days ago
Premium
In focus: Is Europe the heart of the energy transition?
Posted: 22 days ago