BLG is 135 years old. “When you have managed to mold the experience and performance of 135 years into a successful concept for the future, you’re on the right path,” stated BLG’s CEO Detthold Aden at the Annual Shareholder’s Meeting in Bremen on May 31.

The present-day BLG LOGISTICS GROUP AG & Co. KG as a logistics specialist with worldwide operations developed out of Bremer Lagerhaus-Gesellschaft, Aktiengesellschaft von 1877, which used to limit itself to port cargo handling in Bremen and Bremerhaven. The stock corporation is general partner and management company of BLG LOGISTICS GROUP AG & Co. KG. In its three operating divisions, Automobile Logistics, Contract Logistics and Container Logistics, the Group along with its shareholdings at around 100 locations around the world provides over 16,000 jobs.

The stock corporation earned an annual profit of around 2.2. million euros in 2011. The Board of Management and Supervisory Board proposed that the available balance sheet profit of 1,536,000 euros be used for distribution of a dividend of 40 euro cents per share. This corresponds to a payout ratio of 69 percent. Based on the year-end price, a dividend yield of five percent results for the 2011 financial year.

Aden additionally explained the consolidated financial statement of the entire Group at the Annual Shareholder’s Meeting. The focal point of its services is in Europe, but BLG increasingly follows its customers and market developments overseas as well. Aden: “In 2011 we attained Group sales of over one billion euros for the first time. That was 12.4 percent more than in 2010. Our pretax earnings rose by 42.2 percent to 48.5 million euros. In fact, all three operating divisions were above the previous year’s level.”

Through seaport and inland terminals, intermodal shipments and technical services the Automobile Logistics Division performs comprehensive logistics for finished vehicles. No other European automobile logistics provider offers such a network for finished vehicle logistics. This includes cargo handling, storage, technical centers, freight forwarding services as well as shipments via rail, road and water. As a result, the chain of logistics from the carmakers to the dealers is complete. In 2011 a total of 6.5 million automobiles were handled, transported via road, rail and water or processed at technical centers in the Automobile Logistics Division. That was around 20 percent more than in 2010. It thus consolidated its position as European market leader.

The Contract Logistics Division offers complex service packages in the fields of car parts, industrial and retail logistics as well as seaport logistics. Car parts logistics is exceptionally successful at the moment. The division acquired numerous new orders. Recently BMW awarded a substantial contract at the Wackersdorf location. Since 2011 BLG has been supplying Volkswagen’s overseas assembly lines with vehicle parts and components via Bremen, as it has also been doing for Mercedes for a long time. In Brotterode in Thuringia the division took charge of plant logistics for automotive supplier Automotive Lighting. In addition, it received new business from Volkswagen in Brazil involving worldwide export of vehicle parts. Furthermore, the logistics volume in the US was doubled thanks to new orders from Mercedes.

Logistics for offshore wind energy represents a new business segment for BLG. The coming years will be characterized by a construction boom. 29 wind farms in the German North Sea have already been approved and 40 more are in the planning phase. BLG has extended part of the Auto Terminal in Bremerhaven for super-heavy foundation structures of the offshore facilities. So-called tripods are taken from the manufacturer in Fischereihafen to the Auto Terminal by means of the new special OFFSHORE BHV I pontoon and stored there until they are loaded onto the installation vessels.

In the Container Logistics Division, which is run by the EUROGATE joint venture, ten container terminals are operated in Europe and North Africa, in some cases with partners. Apart from operation of container terminals, the division’s portfolio encompasses storage and distribution, intermodal shipments, container depots and repair facilities as well as technical services. Moreover, EUROGATE has shareholdings in inland terminals and railway enterprises. In 2011 container cargo handling rose by 5.2 percent to 13.3 million TEU. This means EUROGATE remains the leading terminal operator in Europe. A total of eight million TEU were handled at the German terminals in Bremerhaven and Hamburg in 2011. That was 13.8 percent more than in 2010. Bremerhaven was the frontrunner with 21.1 percent growth to 5.9 million TEU. 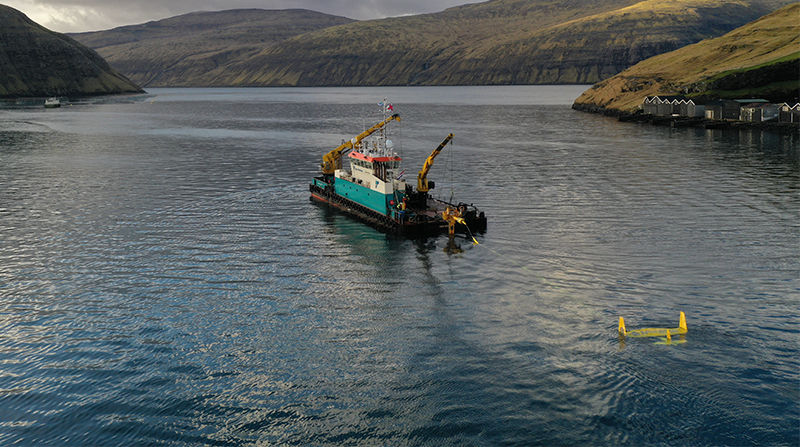