The event was attended by executives from Shell, city hall, local press, and the president of the Industry Federation of the State of Rio de Janeiro (FIRJAN) for the Campos region, Fernando Aguiar.

At the opening ceremony, CHC’s regional director for Latin America, Marcelo Soares, said: “This process of mobilization for the Campos base was a great challenge, but all involved worked as true partners, maintaining our standards of excellence for this new operation that Shell has seen from us across our global operation.” 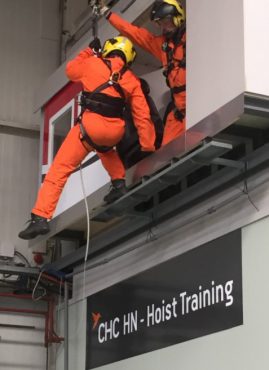 Luis Teixeira, Shell’s logistics manager, added that 1,000 to 2000 passengers would pass through the site, which would provide a great economic opportunity for the city and an important milestone for the company.

The mayor of Campos, Rafael Diniz, was also present at the inauguration event accompanied by the heads of the Municipal Development Company (CODEMCA) which took over the administration of the airport last year.

According to an article from early last year published by Rich Batista, a senior operations manager at CHC Helicopter, the company has been working with Shell Brasil and transferring its workers since 2015.

The facility has been designed to resemble a Leonardo AW139 cabin and can also be used to simulate helicopter hoist operations conditions from an AW169.