China has overtaken Germany as the biggest nation in the container shipping sector in terms of total TEU.

“The fact that China would overtake us in this respect was quite foreseeable: for one thing, the simple reason is that very much larger container ships are being built today; for another, this was to be expected in the wake of the long crisis after 2009,” said Alfred Hartmann, President of the German Shipowners’ Association (VDR).

Data from VesselsValue shows that looking at containerships only (so ignoring all the TEU on other vessels e.g. MPPs) China has overtaken Germany in terms of TEU.

However, in terms of the number of ships, Germany is still the leader. 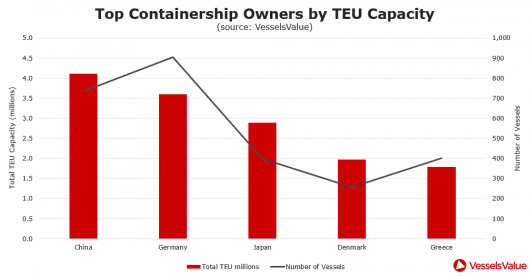 On the other hand, overall VDR figures show that Germany remains the world’s fifth-biggest shipping nation with a 4.9 per cent share of the global maritime shipping fleet, down by 0.6 percentage points year-on-year.

At the end of 2019, a total of 2,140 ships were registered in German shipping registers with a gross tonnage of 52.8 billion.

“That’s 184 fewer ships or 4.7 million less in gross tonnage than a year earlier but still substantially more than when the global shipping boom began 20 years ago,” explained Hartmann.

Over 43% of the German fleet’s vessels sail under an EU flag, in particular Portugal, Cyprus and Malta.

“During times where the idea of a unified continent has come under pressure, I also assess this as a commitment to Europe,” says Hartmann.

Despite the decline in the number of vessels, it has been possible to keep the number of crew members subject to mandatory social security cover more or less stable at 8,265 employees.

“This success story is also reflected in the vocational training figures,” said Hartmann: 420 sea apprentices joined in 2019 and 249 signed up onshore, thus outstripping the previous year’s figures for employees on board, VDR said.

German shipping companies were faced with the immense challenge that they need to produce their services profitably with yields roughly at the same level as over 20 years ago.

“In particular, this is why Germany as a business location cannot afford to impose new taxes on its shipping companies as special burdens that exist nowhere throughout the world, as in the case of insurance tax charged on premium payments for ship insurance policies. This is particularly fatal because parts of the landscape of German shipping companies are developing into a ship management service industry, away from classic ownership,” explained the association’s CEO Ralf Nagel.

He added that not only should the tax relief currently granted in Germany for maritime shipping remain in force without fail in order to maintain the competitiveness of German maritime shipping; further detailed adjustments and extensions should also be provided.

Nagel added that the tonnage tax meanwhile offered by all key shipping locations across the globe should be updated in accordance with the guidelines and directives prevailing in the EU.

“We recommend that the tonnage tax relief already enacted in Denmark, the Netherlands and Norway should also apply to offshore vessels and activities in Germany. German shipping companies are increasingly making efforts to establish offshore wind farms and to transport the necessary material and skilled staff for operation and maintenance of facilities.”