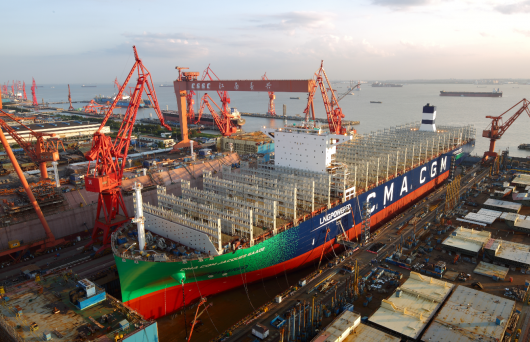 French shipping major CMA CGM has launched the first of its 23,000 TEU LNG-powered containership giants at the Shanghai Jiangnan-Changxing Shipyard.

Rodolphe Saade, Chairman and CEO of CMA CGM, confirmed the development via twitter, saying that with the launching “we demonstrate that energy transition can be effectively successful in our industry if all the players work together.”

The first of the nine newbuildings is named after CMA CGM founder Jacques Saade.

With the launching of the first 23 000 TEU ship powered by Liquified Natural Gas, we demonstrate that energy transition can be effectively successful in our industry if all the players work together. #LNG #EnergyTransition pic.twitter.com/NkvhhtH0dd

CMA CGM said that the exceptionally large vessels (400 metres long and 61 metres wide) will be distinguished from the rest of the fleet by a special livery displaying an “LNG POWERED” logo. The ships will feature some other innovations aimed at boosting their environmental performance, including hydrodynamically optimised hulls, with a bulbous bow and a modern bridge design.

In November 2017, the company decided to be the first shipowner in the world to equip its nine future 23,000 TEU vessels with engines powered by LNG.

CMA CGM confirmed the USD 1.2 billion worth order for the boxship giants in September 2017, a month after market rumors on the order emerged.

At the time, the company said that the new ships “will further reduce unit transport costs, particularly on the Asia-Europe routes.”

In 2022, the CMA CGM fleet will count 20 LNG-powered vessels, including the nine 23,000 TEUs, scheduled to start joining the fleet from 2020, five 15,000 TEU containerships, as well as six vessels of 1,400 TEUs, of which 3 have already been delivered to Containerships, the group’s intra-Europe subsidiary.

The company released a time-lapse video of the ship’s construction, which can be viewed below.