The Board of Directors of Shanghai-listed China Merchants Energy Shipping (CMES) has voted unanimously to support investment in five new Arctic-type LNG carriers intended for Yamal LNG project, located on the Yamal Peninsula in Northern Russia.

The vote was cast at a Board Meeting held on September 18th, CMES said in a stock exchange filing.

As explained, the investment would be placed via CMES subsidiary, China LNG Shipping (Holdings) Limited (CLNG).

CMES said that the approval would allow for capital increase worth $ 3.870 million to CLNG.

In a separate filing, Sinotrans Shipping informed it was in negotiations to take part in a joint venture to commission the building of five Arctic LNG carriers.

The company said it expects to hold a proportion of 25.5% of the shares in the joint venture.

Greece-based shipowner Dynagas is expected to join CLNG and Sinotrans in setting up a USD1.59 billion deal aimed at ordering the five LNG carriers. Under the deal, China LNG Shipping (CLNG) would hold 25.5 percent stake and Greek shipowner Dynagas the remaining 49 percent.

Under the agreements, the joint venture between Teekay LNG and China LNG will build six 172,000 cubic meter ARC7 LNG carrier newbuildings to be constructed by Daewoo Shipbuilding & Marine Engineering Co., Ltd., of South Korea, for a total fully built-up cost of approximately $2.1 billion. The vessels will be constructed with maximum 2.1 meter icebreaking capabilities in both the forward and reverse direction 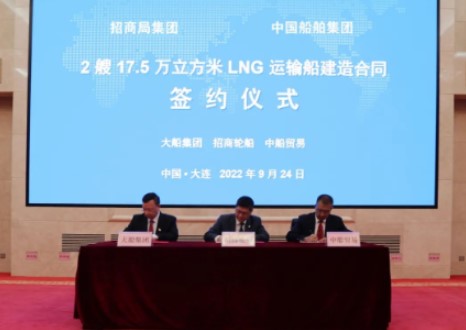