Faroe Petroleum, the independent oil and gas company focusing principally on exploration, appraisal and production opportunities in the Atlantic margin, the North Sea and Norway, provides an operational update.

Planned near term exploration wells are:

– Snilehorn (Faroe 7.5%) – satellite to Njord in the Norwegian Sea scheduled to spud in H2

Following the granting to Faroe of a new licence on the Jan Mayen Ridge in Icelandic waters, Norwegian State-owned oil company Petoro AS has exercised its right to farm into a 25% stake – the first time Petoro has done so outside of Norwegian waters

Total average economic production for the full year 2012 was approximately 7,200 boepd. During the second half of 2012, production was lower than expected due to temporary unscheduled production shut-downs on the Njord, Brage and Blane fields. All fields are now back on stream with production currently at approximately 8,000 boepd.

2012 year-end cash position is anticipated to be approximately £75m.

Rodriguez South, well no 6407/1-6S (Faroe 30%) – the primary targets for this Norwegian Sea well were the sandstones of the Jurassic Garn, Ile and Tilje Formations. The well encountered developed reservoir sands within the Garn and Ile formations but with no signs of hydrocarbons. However, preliminary analysis suggests hydrocarbons may be present in the shallower Lower Cretaceous intervals and an extensive data gathering programme has been carried out; the results will be included in the revised prospect analysis of this licence.

This well spudded on 10 December 2012 and reached total depth of 4,250 metres within the Jurassic Ror formation. The drilling operation was undertaken by Wintershall as operator (50% participating interest), using the Transocean Arctic drilling rig, the other partner being Centrica (20% participating interest). Rodriguez was successfully drilled within budget, on time and with no HSE incidents. The well will now be plugged and abandoned.

Darwin, well no 7218/11-1 (Faroe 12.5%) – this well, to be operated by Repsol Exploration Norge AS, is located on the Veslemøy High in the frontier western part of the Barents Sea approximately 70 kilometres to the south west of Statoil’s recent Skrugard and Havis oil discoveries. This is a high impact wildcat well targeting a large closure at multiple levels and is expected to spud in Q1 2013.

Snilehorn (Faroe 7.5%) – this well and optional side-track, to be operated by Statoil AS, is located four kilometres from the Hyme producing field (Faroe 7.5%) in the Norwegian Sea. The well will target oil and gas in the Lower Jurassic Tilje and Åre Formations and, if successful, the plan is to fast-track a development along similar lines to the Hyme development, with first oil in 2015/16. This well is scheduled to be drilled in H2 2013.

Novus (Faroe 50% and operator) – this well, to be operated by Faroe, is located to the South West of the Heidrun field in the prolific Halten Terrace hydrocarbon province of the Norwegian Sea. The main targets for the well are the Jurassic reservoirs of the Garn, Ile, and Tilje formations and the well is expected to commence in H2 2013.

Butch East and Butch South West (Faroe 15%) – these wells, to be operated by Centrica Norge AS, are located at around 60 metres water depth in the Norwegian North Sea close to significant existing infrastructure with the producing fields Ula, Tambar and Gyda located approximately seven kilometres to the west, 10 kilometres to the south west and 20 kilometres to the south respectively. These wells follow the Butch discovery made in October 2011 which opened an exciting new oil play and the first of these two well are expected to spud at the end of the year.

Full year production was within the range of management expectation but was impacted by unscheduled down time on the Njord, Brage and Blane fields in Q4. On the Njord field re-instatement of production following a planned shutdown was delayed by an accident involving the third party mobile accommodation unit, the Floatel Superior. The Blane field was also down for nearly ten weeks in late 2012, whilst repairs were undertaken after a gas leak had been detected on the Ula platform to which it ties back. Production was temporarily impacted on Brage due to gas processing and export limitations.

All fields are now back on production and first oil from the Hyme field is expected in Q1 2013. The combined Group production from the five principal fields (Brage, Ringhorne East, Njord, Blane, Schooner) and the new additions (Hyme and East Foinaven) is expected to average between 7,000 and 9,000 boepd in 2013.

“We are pleased to provide an update on current operations and a look forward to our continuing active exploration programme for 2013. Production in 2012 has been in line with expectations and has funded both our exploration programme and a significant proportion of our development capex. Aside from our production cash flow, we have robust cash balances and a substantially undrawn debt facility. We expect higher average production rates in 2013, and, as in 2012, we expect that the cash flow from production will fully fund the exploration programme and a large part of the development capex, with the remainder being funded from reserves and our debt facility, as appropriate.

“We drilled six exploration wells during 2012 and the pace of our exploration programme has continued into 2013 with a further five exploration wells planned for 2013 as well as five development wells. The Company is in an excellent position to maintain its momentum in exploration and to make further investments as we execute our growth strategy through the drill bit.” 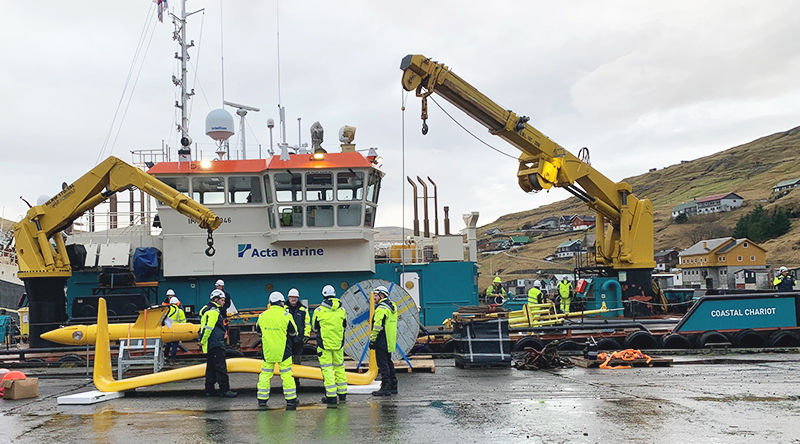 Minesto up and running again in the Faroe Islands
Posted: about 1 month ago
Parkmead agrees ‘in principle’ to become Platypus operator
Posted: 11 days ago
Qatar Petroleum teams up with Shell in deepwater blocks off Namibia
Posted: 5 days ago
Advertisement
Related jobs