Construction of the North Sea wind farm Global Tech I is complete: 100 kilometres from the German coast and occupying an area half the size of Bremerhaven the offshore wind power station now stands with 80 turbines of the 5 megawatt class (AREVA Wind M5000-116) and the farm’s own transformer station. At present, only the cable work needs to be finalised.

An underwater robot is checking that the farm’s 120 kilometres of internal cables lay correctly and at the right depth in their seabed trenches.

Arjen Schampers, Technical Managing Director of Global Tech I Offshore Wind GmbH with responsibility for the wind farm’s construction said: “We are proud of our team, our suppliers and installation contractors. We have worked day and night in all winds and weathers and proven we can construct with precision a 400-megawatt wind farm at sea in water 40 metres deep. Since weather largely sets the pace, a high degree of flexibility is called for from all taking part. Manufacturing, logistics and installation must proceed hand in hand. All in all, building the wind farm was a superb example of teamwork, resulting in a technical masterpiece.”

Construction of the wind farm was completed within its cost parameters.

Around 100 people work directly for the project company Global Tech I Offshore Wind GmbH, which has planned and constructed the wind farm in detail since early 2010. The Global Tech I offshore substation platform is manned by up to 38 persons around the clock, to guarantee operational commissioning of the turbines and subsequently the efficient operation of the power station. The technical design of the transformer substation and the internal cabling is configured with redundancy so that a reliable supply of electrical energy for the equivalent of 445,000 households can be guaranteed. The operational control station of the wind farm is located directly at the company headquarters in Hamburg.

Transmission grid operator TenneT wants to connect Global Tech I in early September to BorWin beta, the TenneT offshore converter station. This is a great advantage, because the connection will supply the turbines with energy needed for their own consumption. Electrical connection also makes it possible to commence commissioning of the turbines. TenneT wants to commence with test operation of the grid connection and the interplay of the overall system of connection and wind farm during the fourth quarter this year. During this test phase the wind turbines will contribute small amounts of electricity to the grid. The regular grid connection is expected to be available in early 2015. Construction of the first project-financed 400 megawatt offshore wind farm originally began in autumn 2012. Since the grid connection was delayed several times, Global Tech I adjusted its original construction plans as much as possible by starting turbine installation at a later date. The turbine installation is now finished in good time prior to the start of the testing phase.

“The motto ‘safety first’ was our highest priority while building Global Tech I. As we see it, safety is the responsibility of everyone involved. That is why our HSE managers were repeatedly in attendance at the various work sites and at the many meetings and workshops – to heighten awareness for safety at work. On the few occasions necessary we called a temporary halt to the work, so that it could be done a safer way. In this connection, costs were never a consideration. All in all, we are most pleased to have avoided any serious accidents. We will do everything we can to make sure this remains the case in the future.”

“The key to success in an offshore wind farm’s construction is to continuously monitor and manage the project. We intervened occasionally to adjust the construction process and ensure we achieve the major milestones. Whenever one task threatened to delay the overall project, we countered by amending our logistics and installation plans. For example, last summer we decided to deploy a third vessel to accelerate turbine installation. A lot of flexibility was also demanded of our contract partners in the project. Only that way were we able to construct the wind farm within its time and cost parameters.”

“The transformer station was built in Rotterdam and towed as a floating unit to the offshore site by five tug boats working in concert. We covered 360 kilometres at a speed of five kilometres per hour. To permit us time for this journey and the precise GPS positioning and installation at the construction location, we had to wait for a days-long weather window of very small waves and little wind. We were all very tense when the time came, but it all went perfectly. We anchored the transformer station in an environmentally sound manner into the seabed with suction buckets. It is the first time this method has been used for an offshore wind farm in the German North Sea. Our transformer station easily withstood the severe storms of last autumn. It is designed to withstand even exceptional high waves.”

“We used modern jack-up crane vessels to install the foundations and turbines. That turned out to be a good decision, because the same vessel was able to both transport and install the extremely heavy assembled sections, thus saving us much time. Our tripod foundations each weigh 900 tonnes, for example. They are 60 metres in height, the same as a 20-storey building. In good weather conditions, we were able to install three of them in just ten days, including their shipment to the site. Bremerhaven was also an excellent choice for our project as its base port, because the distances between manufacturers, intermediate storage areas and the port were all short and this enabled us to work very flexibly. The cost of running the massive installation vessels is high, so as soon as they return to harbour from the construction site everything must be ready on the dock to enable their immediate loading.”

“Among other measures, we deployed a big bubble curtain to protect the porpoises from the noise of driving the piles to anchor the tripod foundations. Bubble curtain systems first found use in construction of wind farms in the North Sea. When construction of Global Tech I started, there was little practical experience with the technology to benefit from. Certainly given the parameters associated with Global Tech I we were pioneers: 100 kilometres from the coastline, 40 metres water depth, the corresponding heavy swell, tripod foundations and a bubble curtain pressure hose 850 metres long. Throughout the construction phase we made a lot of improvements to the hose system and to the deployment vessel. We also gave the crew a thorough training, who had to stand on the deck and deploy the pressure hose in waves of up to five metres. There was still a great need for more research into, for example, the sound propagation of construction noise and the behaviour of porpoises. We carried out lots of studies and research activities along with research institutes and partners in our industry to help optimise the noise protection. In our wind farm we could detect no porpoises in close proximity to the construction site while the pile driving work took place. After the work was finished we were able to determine exactly the same levels of porpoise activity as there had been prior to the work. This implies a rapid return to normal.”

„AREVA Wind accomplished the pre-assembly of the rotor stars at the terminal site of the JadeWeserPort. The area is ideal since the 3-blade rotor can be transhipped efficiently from the quay edge directly onto the installation vessel. Depending on the decks layout they were transporting two or four rotor stars to the construction field. Thus, to ensure that always enough rotor stars were available for the loading we had temporarily up to nine rotor stars at the same time either in the pre-assembly or in the storage area. The offshore installation of the rotor stars with a diameter of 116 metres is a special challenge since the North Sea wind hits a surface area of the same size as one and a half football fields. To mount a rotor star at high wind speeds at a height of 90 metres and to tension it with 72 bolts is high precision work.”

“Our 95 underwater cables represent a complex cabling network. They connect the 80 wind turbines together with the transformer station as an electrical grid and a communications network that in future will provide a reliable electricity supply. We have laid 120 kilometres of cable in total, covered more than a metre deep in the seabed. The precise work required was carried out by a state-of-the-art remotely operated vehicle at a depth of 40 metres. Everyone involved has demonstrated untiringly high levels of commitment at all times of the year to efficiently lay a total of 4,000 tonnes of cable in their prescribed cable routes.”

“We were of course dependent on the weather during construction of our wind farm. For this reason, flexibility was a fundamental requirement for our work. At our construction office in Bremerhaven we determined and coordinated the movements of all vessels and activities of teams with the various skills needed for the transformer station, foundations, turbines and cabling. This ranged from near-shore logistics to the transhipment of components and installation on site. From here we also planned and coordinated the helicopter flights and supplied provisions for our transformer station. All in all, we have directed a major construction site in the North Sea from Bremerhaven. On some days there were as many as 350 people working offshore. That is why we had construction managers and marine coordinators on duty at all times 24/7.”

“In July 2012 our Marine Coordination was established. The first vessels laid the cardinal buoys at the construction site, markers that indicate the perimeters of the construction site. Subsequently over 70 different vessels have been involved in construction of Global Tech I, all of which we were obliged to previously register with the German Maritime and Hydrographical Agency (BSH). Modern maritime monitoring software gives our nautical specialists an overview of what is happening at the construction site at all hours. Offshore work is characterised by lots of team spirit. All vessels involved assisted one another whenever needed. We supply everyone involved with detailed weather information several times a day so that the work can be planned well. The highest wave we have measured was 18 metres high. Of course, no work is possible under such conditions.” 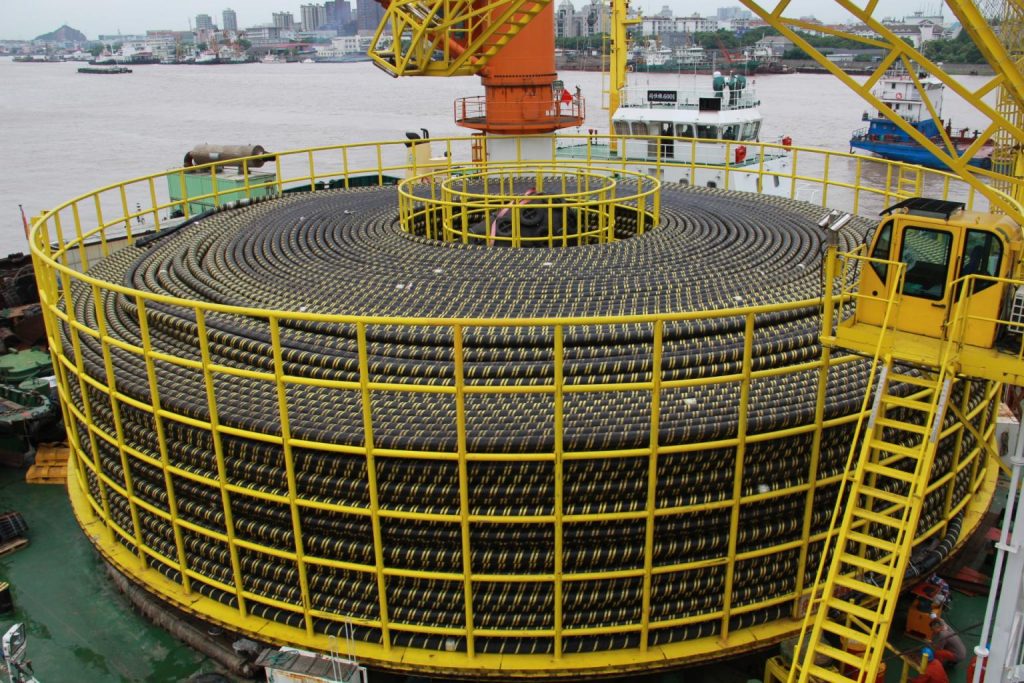