Germany’s Port of Hamburg and Dutch Port of Rotterdam could join forces on reducing emissions from the shipping industry under a proposal submitted by local politicians from the two port cities.

The proposed plan would see the ports operate under a set of identical climate protection measures that would be further harmonized.

With the measures, Europe’s biggest and third-biggest port would set an example in reducing greenhouse gases and air pollutants for other ports and port cities to follow.

In Germany, representatives of the Green Party and the Social Democratic Party have already submitted a proposal for the adoption of the measures to the Hamburg legislature while their Dutch counterparts are expected to follow suit in September this year.

“We want Hamburg’s port to be carbon neutral. To do this, we need to reduce the CO2 emissions of all container ships during their stay to zero in the medium term,” Anjes Tjarks, Green Party politician in Hamburg, said.

“In order for us to achieve this goal, we want to implement this together with the other ports in the North Range. That’s why I made my way to Rotterdam in April of this year. And I was able to state that Hamburg’s biggest competitor port could also become our strongest ally in ecological matters.”

The measures will be aimed at allowing the Port of Hamburg and the Port of Rotterdam to reduce pollution in a “level playing field”, it was noted. The two sides intend to invite other port cities to join the initiative. 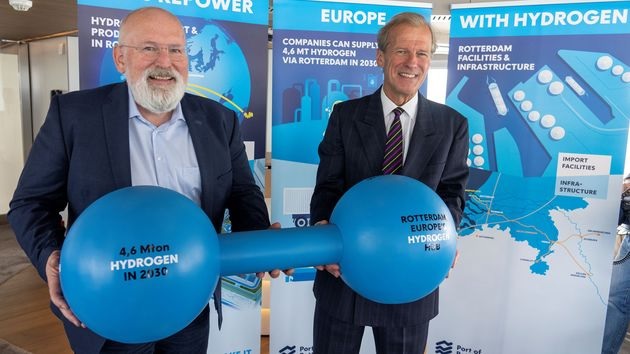 Rotterdam to provide 4.6 mt of hydrogen by 2030
Posted: 18 days ago
Hamburg examining locations for floating LNG terminal
Posted: about 1 month ago
Flotte Hamburg, TU Hamburg partner up for cleaner air in the port
Posted: about 1 month ago
Ports of Duisburg and Rotterdam looking to establish hydrogen hubs
Posted: 17 days ago
Port of Rotterdam looks into impact of EU ETS for shipping
Posted: 2 months ago