The standard configuration of the SOV serves as a base for 60 technicians and crew members accommodated in single cabins, but can also be reduced to 40, if required.

Low noise level during operation of the vessel is achieved through acoustically insulated bulkheads and decks in the accommodation and adjacent to thruster rooms, engine rooms and hydraulic rooms, the designer said.

Roll motions are minimised by a roll reduction tank system, and the vessel’s tank and store capacities are designed for an autonomy of minimum 30 days.

The trial speed of 13 knots is achieved by two main engines of 1,400 kW, three auxiliary engines of 1,200 kW and two controllable pitch propellers, the designer said. The vessel maneuvers with the help of two high lift flap rudders and five transversal thrusters.

Exact positioning and station keeping (DP2) of the vessel is secured by three bow thrusters and two stern thrusters in combination with the propellers and the rudders.

Several transfer systems onboard enable technicians and workers to access the offshore structures, including the motion compensated gangway which gives the SOV walk-to-work capability and is arranged on portside. The vessel also features a lift positioned next to the gangway which elevates personnel and cargo up to 300kg from main deck to the gangway system.

The SOV’s daughter craft is a closed superstructure type with redundant propulsion. It has a capacity of two crew and eight passengers, and a speed of up to 30 kn.

[email protected] says that the stern hangar concept sets this SOV apart from other service vessel designs and allows safe launching and recovering of the daughter craft in bad weather conditions. For the use of external vessels such as crew transfer vessels, the SOV is equipped with an additional boat landing system.

The SOV also has a covered warehouse for spare parts and tools. The dimensions of the cargo hold is 10.8 m x 15.2 m allowing the stowage of up to 6 TEU containers.

The cargo hold is covered by two pontoon hatch covers. The deck crane of SWL [email protected] is arranged portside and is of a knuckle boom type. 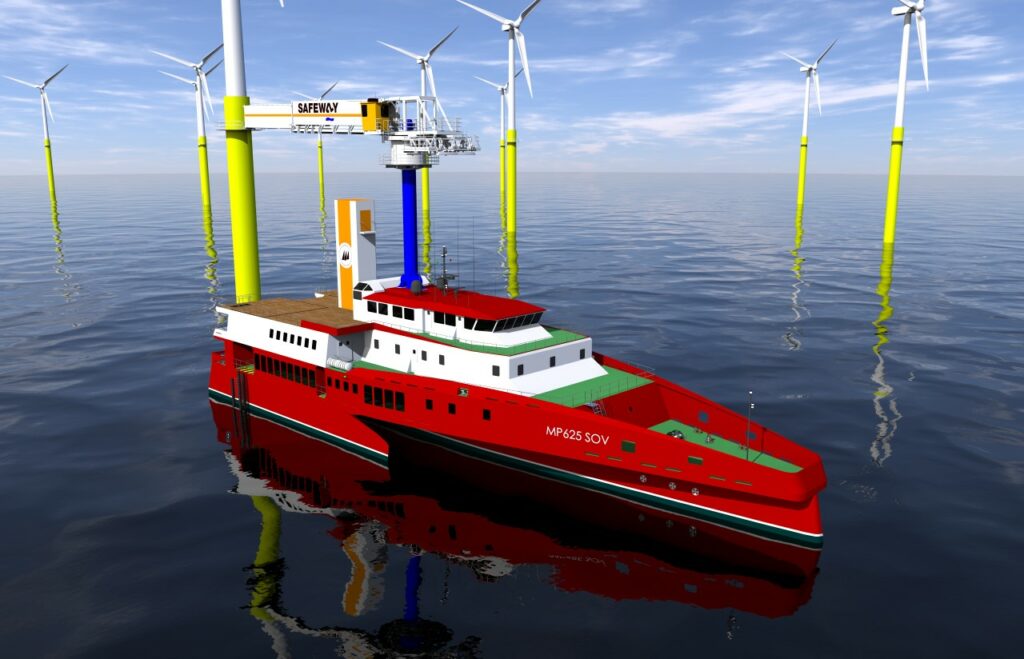