UK-based Hurricane Energy has signed a contract with Bluewater, the owner of the Aoka Mizu FPSO, for an extension to the bareboat charter beyond the current expiry date of 4 June 2022.

Following a period of discussions between the two companies related to the charter extension for the FPSO vessel, the charter was extended last Friday to cover the remaining economic life of the Lancaster field off the UK with either party getting an option to give six months’ notice to terminate the charter.

As previously reported, Hurricane has been experiencing financial woes and working on its financial restructuring. However, its restructuring plan was rejected last year.

Meanwhile, the company was looking to shorten the bareboat charter term for the FPSO Aoka Mizu due to significant financial obligations of a full three-year option. Hurricane said last year that, if it failed to come to an agreement for the vessel charter, it would have to wind down its business, cease operations at the Lancaster field, and decommission it.

Now that the agreement has been made, the existing day rate and tariff for the vessel remain at $75,000 per day and 8 per cent of revenue respectively.

Hurricane agreed to establish a secured deposit account of up to $18.7 million for the benefit of Bluewater to cover the costs associated with the day rate for the six-month notice period and decommissioning in respect of the vessel.

Antony Maris, Chief Executive Officer of Hurricane, commented: “It was key we found a mutually acceptable deal that will enable the company to continue production beyond repayment of the bond. Based on the current oil price and field performance predictions we forecast this to be at least 18 months from 4 June 2022.

“With production continuing in line with our projections, good uptime performance on the FPSO and assuming oil prices are in the range $90-110/bbl, we believe that post clearing our bond debt and after funding the Bluewater secured deposit account, Hurricane will have between $50-80 million of net free cash at the end of July 2022.”

In addition to the charter extension, the company has negotiated with BP Oil International, the purchaser of its crude oil, a facility that will allow for cash to be advanced ahead of a lifting. This provides the ability to create more frequent cash receipts and assist with the company’s working capital. The facility incurs a financing fee that is only payable if the company uses it.

Hugo Heerema, President and CEO of Bluewater, commented: “We are pleased to announce the extension of contract for the Aoka Mizu FPSO which will enable Hurricane to continue production from the Lancaster field in times that energy supply is of the essence. The excellent uptimes of our FPSO will help Hurricane to continue to achieve high productivity figures.”

The Hurricane-operated Lancaster field is now in its first phase of development with an Early Production System (EPS) consisting of two wells tied back to the Aoka Mizu FPSO vessel. The first oil was achieved in June 2019. 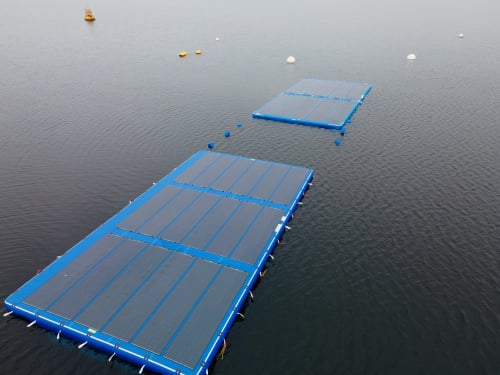