Advertisement
Back to overview
Home Subsea INTERVIEW: MMT to Continue Development and Focus on Surveys for Oil and Gas Industry

INTERVIEW: MMT to Continue Development and Focus on Surveys for Oil and Gas Industry

On the second day of the Offshore Energy Exhibition and Conference held in Amsterdam RAI, one of our reporters made an exclusive interview with the project and sales director of MMT SE Mr. Nils Ingvarson. Hereby we are bringing you a part of their conversation.

– What do your activities in the subsea world include?

– Do you build and design your own equipment?

No, we don’t, we buy it from various suppliers, depending on what we need. We do necessary modifications to fit the survey kit in a complete in house solution. We have long term relations with providers of our equipment so we can follow the equipment development.

– Can you change the specifications of the equipment that you buy from the suppliers?

Yes, we like to participate in some innovations and address important things that we think could do improvements on the equipment.

– Can you tell us something more about your seagoing vessels?

We have seven vessels in our fleet, and the biggest is Franklin which is 56 meter long. She is our main vessel for offshore work.

We have also in our fleet MV Icebeam, a 40 meter long vessel for wind farms work and cable surveys which is currently working in the North Sea.

– In the Baltic you gained the most of your experience, what can you tell us about that?

We did numerous surveys for fiber optic cables, power cables and the Swedish navy in the Baltic in the 90.

In the Baltic we have many different challenges, we have, for example, in parts very irregular topography, distinct changes from hard seabed to extremely soft seabed. The seabed conditions requires numerous engineering works if you want to install things and detailed, accurate results from survey are crucial.

There is also significant variations in the sound velocities due to changes in water temperature and salinity. This has a large impact on the corrections to be made to the sonars. But in my opinion it is a very good place to learn how to survey.

– What can you tell us about your North Sea activities?

We are increasing our amount of the work in the North Sea and in the past years we have succeeded quite well in that.

We have increased our work around the UK as well, and now we’ve done linking projects of power cables going from the UK to Norway and Belgium. We have conducted a number of surveys related to the windfarm development, especially during the last 3 years in UK waters.

We have also since last year done projects for Statoil in the North Sea.

We conducted hydrographic surveys for the Norwegian government, and we have participated in the Mareano Project for a number of years now. The surveys were done with M/V Franklin.

– Do you see chances for investment possibilities for yourself in this market in the future?

Our goal is to expand and to do it in a proper way. We feel that we’ve reached the level when we got the Statoil frame agreement, and that is something to build on. Now we can continue to develop and focus on surveys for the oil and gas industry.

Also we see that there are a lot of surveys to be done in the wind farm industry, not only in the UK but all the way to Germany, and further south, in the Netherlands and France, and also in Belgium.

– What do you think about the French market, is that a target for you?

We’re looking into it, and we do have French native speaking people in the company which helps a great deal with making contact with the companies, and we are aiming to do just that.

– You have mentioned military surveys for the Swedish navy, do you do them nowadays?

We had many military surveys in the ‘90s, but for now there is not so much for the moment.

– Have you done any surveys on environmental aspects?

Yes we’ve do them; it is normally a part of the requirements to carry out environmental surveys for cable installations. We have a department of specialist in this filed and we have also done projects solely related to environmental surveys. We hope do much of these surveys in the future.

– What are the bases of you company?

We have our head office in Gothenburg in Sweden and our UK office is situated in Banbury UK.

We have an intention to spread out our base. We have the competence and really good people.

– For the end what can you tell me about your experience at this year’s Offshore Energy?

It  has been good, we have met many companies were we can see a potential collaboration. 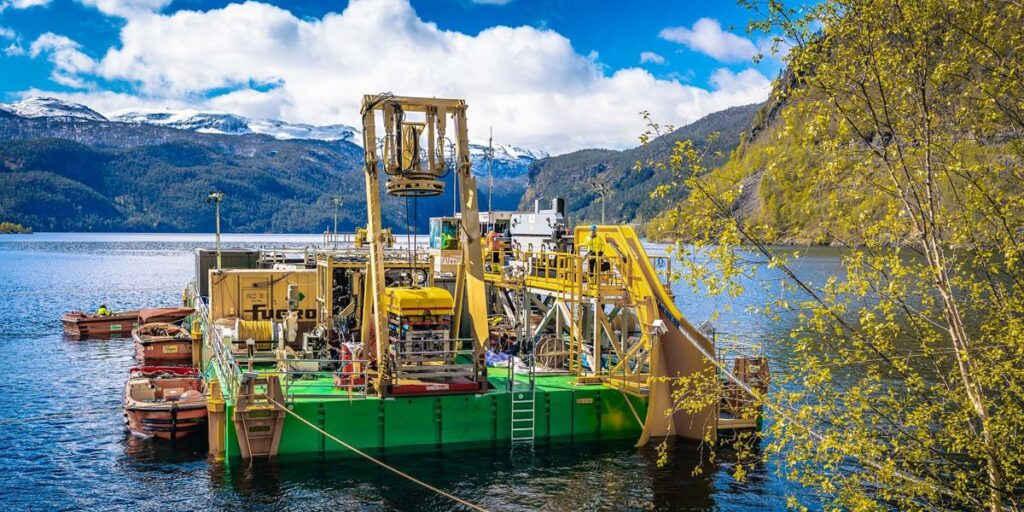