Advertisement
Back to overview
Home Green marine ITF: Two stranded bulkers with 25 seafarers on board just a drop in the sea

ITF: Two stranded bulkers with 25 seafarers on board just a drop in the sea

Two bulk carriers with at least 25 seafarers on board have been left to their own devices at anchor in the Port of Djibouti at the peak of the COVID-19 pandemic.

According to the International Transport Workers’ Federation (ITF), the two ships have been arrested over unpaid debts and the ships have been at anchor for months pending resolution of court proceedings.

The bulkers in question have been identified as M/V Arrybas and MV Ptolemeos, both flagged in Liberia.

Greek shipping firm Probulk Shipping, owner of MV Ptolemeos, is being sued by Djibouti authorities for over $10 million in debts to banks and suppliers.

The company has a history of bankruptcy and the two ships have already been embroiled in crew abandonment issues.

However, as court proceedings might take months to be finalized, the union representatives are calling for the repatriation of the affected seafarers, as some of them have been denied salaries for eight months and a few of them had been hospitalized due to health issues.

The issue has been raised to the Port of Djibouti by the ITF inspectors and the Greek Government has also launched initiatives to repatriate its sailors.

It appears that local administrative authorities are reluctant to move forward with the resolution of the situation, according to West P&I Club.

“All this started before Covid-19,” Mohamed Arrachedi, ITF Arab World and Iran Network Coordinator, said. “Now we have even more difficulties with repatriation. The seafarers are dispirited. There is no sign of a solution.”

Arrachedi said cases of crew abandonment were growing as nations locked down their borders during the global pandemic.

“We’ve got lots of cases,” he said, listing 18 Syrian seafarers on board the Hannoud-O livestock carrier who have been abandoned in Lebanon for five months without pay, seven Egyptian seafarers onboard the Nader in Sudan with no food or drinking water, and an Indian seafarer stranded in Tunisia unable to either join his ship or return home.

“Many don’t pay their crew wages,” he said. “They are acting with impunity. It is a cancer that the maritime industry must work together to eradicate.”

COVID-19 and the crew changes crisis

The COVID-19 pandemic has exacerbated the repatriation challenges for seafarers and unions and global maritime bodies have been struggling with governments to facilitate their free movement as essential workers.

Estimates suggest that, every month, 100,000 seafarers finish their contracts and would normally be flown home.

The EU has rolled out a strategy for its member states aimed at creating a network of ports where crew changes could take place.

There have been some initiatives from India and Singapore to ease the restrictions, nevertheless, these have not been sufficient to resolve the crisis.

Secretary-General of the IMO Kitack Lim has written to all IMO Member States, urging them to recognize all seafarers as “key workers”, remove any barriers to their documentation and lift national travel restrictions so that they can get home on conclusion of their contracts, and rejoin their families.

In his latest personal message to seafarers, the Secretary-General said he had been “deeply touched by the many stories we have heard from individual seafarers of the challenges, hardships and sacrifices that seafarers have made to keep the global supply chain moving while helping the global population.”

He noted the difficulties the maritime industry has faced in conducting crew changeovers, providing medical care for sick and injured crew and allowing for shore leave, and added “the inability to resupply or repatriate crews concerns me greatly”.

Describing seafarers as being in the “front line’’ of the global fight against the pandemic, Lim recognized the challenges faced by the seafarers reassuring them they were not alone.

Numerous shipping companies recognized that this was a black swan event. Even so, they believe collective crew changes at identified ports are a feasible short-term aim even in the midst of the coronavirus pandemic if state assistance is made available.

“First and foremost, prolonged periods of service onboard will ultimately result in a significant increase in mental wellbeing issues among the seafaring community,” Graham Westgarth, CEO of V.Group,  said earlier this month commenting on the impact the situation is having on seafarers.

“We should also be aware of the negative impact it will have on their families. Ultimately, such a situation can only jeopardise the safety of the individuals and potentially the vessels they sail on. 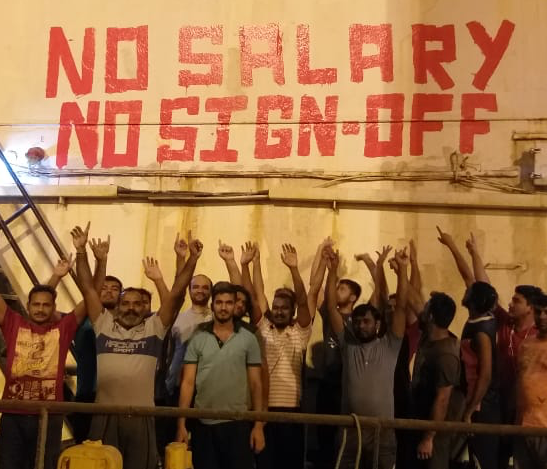