Maersk to operate its first green warehouse in Denmark

The 40,000 sqm facility has an option for an additional 40,000 sqm and is scheduled to become operational in 2024. It will be located in Taulov in South Denmark.

The project will be realised in partnership with Taulov Dry Port, which is a Danish joint venture between ADP A/S and PFA Pension.

As explained, the warehouse is part of Maersk’s strategy “to accelerate the delivery of fulfillment capability in Denmark”.

“We are pleased to announce our first green contract logistics warehouse in Denmark. Many of our customers are looking for long-term partners that have such capabilities to reduce their entire climate footprint. The Taulov facility also has a strategic position in Europe and will be a key asset to serve our customers as a deconsolidation point and add value by optimizing transport modes with its port, rail and road links creating flexibility in flows by accelerating or slowing down supply chains,” Birna Odefors, Area Managing Director, Nordics, A.P. Moller – Maersk, commented.

The green contract logistics warehouse is aiming to be built to BREEAM Excellent standards with zero direct emissions from operations in full accordance with Maersk’s overall goal to decarbonise its entire operations by 2040.

Maersk’s emissions targets entail that at least 90 pct. of its global cold chain and contract logistics operations will be certified as green by 2030 (scope 1 and 2).

Taulov Dry Port owns the commercial land and the logistic premises. Since Taulov Dry Port was established in 2017, the joint-venture partnership between ADP A/S and PFA Pension has been based on ambitions of being innovative in the development modern storage and logistics buildings and leading sustainable transport infrastructure, which among other things includes the construction of Denmark’s largest hydrogen refueling station.

The parties have reached an agreement with Maersk for 12 years lease with the option to both extend and expand. The warehouse will be built by Taulov Dry Port based on Maersk’s specifications and design.

The agreement with Maersk to build the first logistics warehouse with zero emission from fuel and energy is said to be another milestone for the development of Taulov Dry Port and is an important step in the long-term partnership.

“We are proud to be part of Maersk´s sustainable value chain supporting their customers with visionary sustainable logistics solutions. Taulov Dry Port is a European multimodal logistic hub and key player in the green transition of the logistic sector due to the sustainable infrastructure with the Port of Fredericia, the motorway and railway network. Soon the area will also be ready for the transition towards new green fuels such as hydrogen, which will be an important asset for Maersk as well as our other customers,” Rune D. Rasmussen, CEO in ADP A/S, said.

Advances in technology, new industry standards and increasing customer demand for sustainable supply chains have speeded up the ambitious project. All indoor and outdoor equipment in the warehouse will be electrified, solar panels will be installed on the entire roof of the warehouse and excess renewable energy produced will be fed to the grid.

Battery driven trucks will be used for all of the shunting operations and hydrogen stations are planned within 150 metres from site.

“This important partnership once again proves that Denmark is at the forefront of green transition and that climate and logistics can go hand in hand,” Michael Bruhn, Executive Director at PFA, stressed.

With the divestment of its shares in GPI, APMT will no longer be involved in any entities operating in Russia or own any assets in the country. 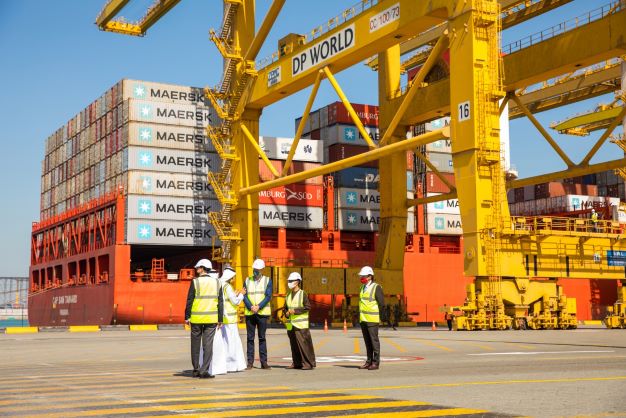