The float-out of the 180,000 GT cruise ship marks the beginning of the final stage of construction, before the ship’s scheduled October 2019 delivery.

Costa Smeralda is part of an effort of Costa’s mother company, Carnival Corp, to bring the world’s first LNG-powered cruise ships into operation.

Meyer Turku has worked together with sister shipyard Meyer Werft, Papenburg to create the LNG propulsion plant for the vessel.

“With LNG a breakthrough in fuel technology, Costa Smeralda represents a major innovation for the international market and an important step toward setting new standards for the entire sector,” said Neil Palomba, President of Costa Cruises.

Once it begins operation in the second half of 2019, the ship will start its first cruise from Hamburg sailing via Rotterdam, Lisbon, Barcelona and Marseilles to Savona, Italy, where a naming ceremony will be held. 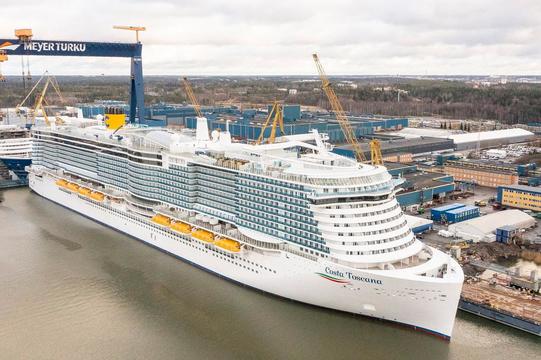