NCLH teams up with PortMiami on shore power

Furthermore, the facility will be constructed according to the leadership in energy and environmental design (LEED) standards for optimizing energy, water efficiency, air quality, and utilization of local materials and resources.

In addition, approximately 90% of all subcontractors, vendors and suppliers were local to the region, reducing the carbon footprint of the project and encouraging local economic growth.

According to the port’s authority, this new terminal, the Pearl of Miami, will be able to accommodate cruise vessels carrying up to 5,000 cruise passengers.

As part of this program, the company unveiled its long-term climate action strategy and goal to reach carbon neutrality through reducing carbon intensity, identifying and investing in technology including exploring alternative fuels and implementing a voluntary carbon offset program.

“Climate action is one of the key focus areas of our global sustainability program, Sail & Sustain, and partnering with Miami-Dade County to bring shore-power capabilities to our new state-of-the-art terminal at PortMiami aligns with our long-term climate action strategy,” said Frank Del Rio, president and chief executive officer of Norwegian Cruise Line Holdings.

After signing a partnership agreement with six major cruise lines to bring shore power to PortMiami, Miami-Dade County revealed that the Floridian port will be “shore power ready” by fall 2023.

Other cruise lines and groups that have signed on the PortMiami’s include Carnival Cruise Line for its new Terminal F and Royal Caribbean Group for Terminal A.

The first phase of the project was financed by U.S. Environmental Protection Agency (EPA) with a $2 million grant. According to the EPA report for the Port of Miami, by investing in shore power the port could reduce its carbon emissions by 35%. 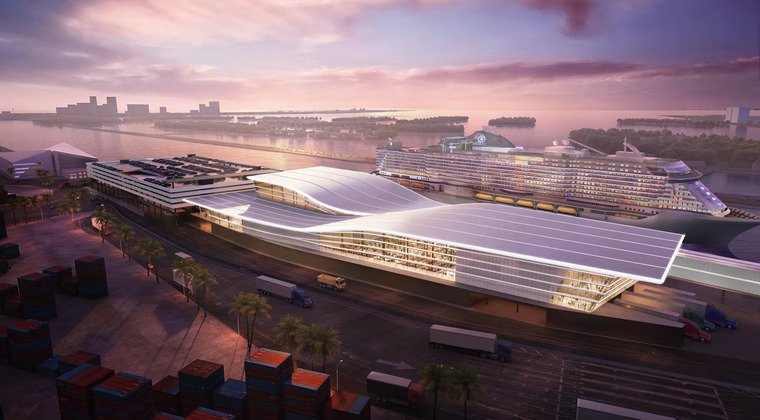