New Age is the operator of the block with a 50 percent ownership, with Rift Petroleum – a subsidiary of Tower Resources – owning the remaining 50 percent.

Tower Resources on Friday said New Age Energy had engaged Envoi Limited to conduct a farm-out process on behalf of both New Age and Rift to seek a partner for a material share of the license working interest, in return for funding a further 3D seismic survey over a portion of the Licence area.

The new 3D seismic survey would focus on the Gamtoos basin and/or the South Outeniqua basin, the latter being part of the slope margin play being targeted by Total, Exxon and Equinor in adjacent acreage.

Any prospects identified and high-graded during the processing and interpretation of the new 3D dataset could ultimately lead to a well being drilled in the 3rd Renewal Period, presently due to end in December 2023.

According to Envoi, hired to carry out the farm-out process, the 9,369 km2 acreage straddles the Algoa and Gamtoos Basins, positioned at the eastern end of a series of en-echelon petroleum basins on the southern shelf margin of South Africa, which developed during the Jurassic break-up and separation of southern Africa from the Falkland Plateau of South America.

Envoi said: “Recent geological reviews have shown that the true hydrocarbon prospectivity of the area has been largely unexplored by the drill bit, as historical wells were located using old 2D data and did not intersect valid closure or encountered only modestly developed reservoir sands at the fringes of the main depocentres.

“Many of these old wells drilled in both the Algoa and Gamtoos Basins, however, either had shows, residual hydrocarbons and/or penetrated and confirmed three mature, wet gas to oil-prone shale source sequences of up to 4% TOC. Two of these source units lie within the Jurassic Early Syn-Rift fill and one within the subsequent Cretaceous Rift-Drift succession. Independent modelling confirms they are mature in both central basin play areas.”

Per Envoi, the five primary leads alone are estimated capable of containing a combined ‘mean’ potential of 1.4+ billion bbls STOIIP (an upside of over 2 Billion STOIIP) and several hundred million barrels of recoverable resources in the three undrilled plays to be refined by new data.

“The NewAge operated Group would now like to find a partner(s) interested in earning up to 50% of their combined 100% interest by contributing to past costs and funding a new 3D seismic survey before the current 1st Renewable Period of the Licence expires in August 2019 (estimated likely to cost US$ 7 million gross). The new partner will also have the option to earn additional interest by further contributions to an exploration well in the subsequent Licence Period,” Envoi has said. 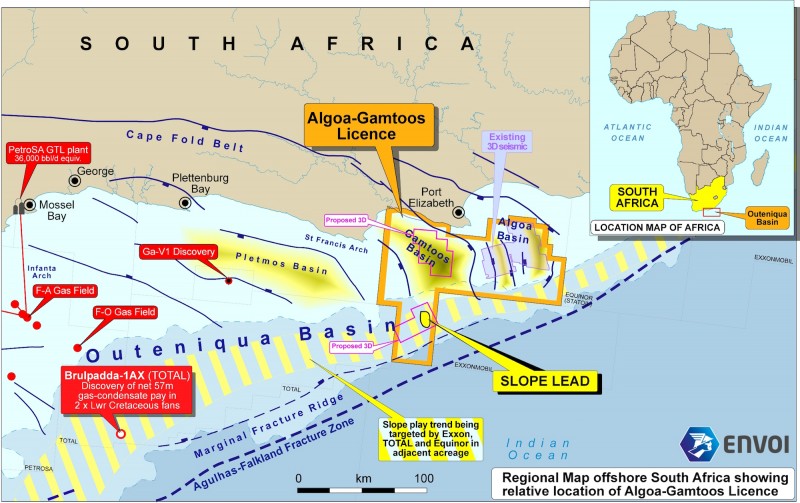