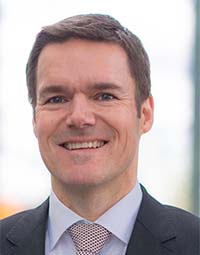 Bøhn, who takes over from Lee Parker, has more than 20 years of experience from the seismic industry.

He has held management positions as vice president of marine operations at CGG and as COO at inApril.

He holds a master of science degree in Geomatics from the University of Oslo.

Lee Parker has decided to resign his position as CEO in order to pursue other opportunities.

Parker has agreed to continue to support the company in an advisory capacity during a transition period.

Earlier this week, AGS said it will reduce operations due to significant uncertainty in the market as a result of the COVID-19 crisis.

According to the Oslo-listed AGS, this should take place following its current surveys in the North Sea and Egypt.

The company will cut Its onshore staff by approximately 20 per cent whilst maintaining core positions, business development and tendering activities.

It plans to retain key crew personnel to allow for quick mobilization.

Consequently, Axxis Geo Solutions expects to reduce its cash run-rate to less than $800,000 per month.

The Oslo-listed firm generated quarterly revenue of $45 million, versus approximately $25 million in the prior-year comparable period.