Norwegian authorities have today rejected an appeal from Greenpeace, thereby giving Statoil final permission to begin exploration activities on the Apollo prospect in the Barents Sea.

The appeal concerned the company’s discharge permit, and the decision from the Ministry of Climate and Environment states that drilling does not violate the general guidelines for petroleum activities in the Barents Sea.

Statoil is thus permitted to conduct the drilling operation as planned, including drilling in oil-bearing layers. The exploration activity now has all the authority approvals needed to start up.

The Apollo prospect is located in the Barents Sea, where more than 100 exploration wells have been drilled over the last 34 years. This is an area Statoil knows well; its geology is familiar, it has low pressure and temperature, and the company participated in an exploration well 50 km further south (the Wisting well) just last year.

Greenpeace has been obstructing Statoil’s activities since Tuesday, 27 May. The Transocean Spitsbergen rig was on its way to the drilling location when activists from Greenpeace boarded the rig.

Norwegian police ordered the activists to conclude their action on Wednesday, and when several activists refused to leave the rig, they were picked up by the police with assistance from the emergency response unit.

However, Greenpeace has persisted, placing one of their boats at the drilling location, where Norwegian authorities have established a temporary safety zone so that the rig can get access to the location.

“Greenpeace has once again performed an illegal action. Statoil respects people’s right to make a legal protest, and we feel it is important to have a democratic debate around the oil industry. Our exploration drilling on Apollo is taking place in an area which has been impact assessed, opened up and awarded by Norwegian authorities. We have established robust plans for the operation, and feel confident they can be carried out safely and without accidents,” says Irene Rummelhoff, senior vice president for exploration on the Norwegian continental shelf.

The Norwegian Coast Guard took control of the Greenpeace ship Esperanza and transported it out of the area late in the evening of 30 May. The Transocean Spitsbergen rig is now established at the drilling location in the safety zone and is preparing to start operations.

“Our top priority is to have safe operations without any harm to people or the environment. Delayed exploration activities come at a cost, however, which we estimate to be at a level of NOK 7.5 million per day. In addition there are the costs to society,” says Rummelhoff.

The exploration activities in the Barents Sea are part of Statoil’s strategy to find oil and gas resources that will meet the world’s growing need for energy and also benefit the Norwegian society. 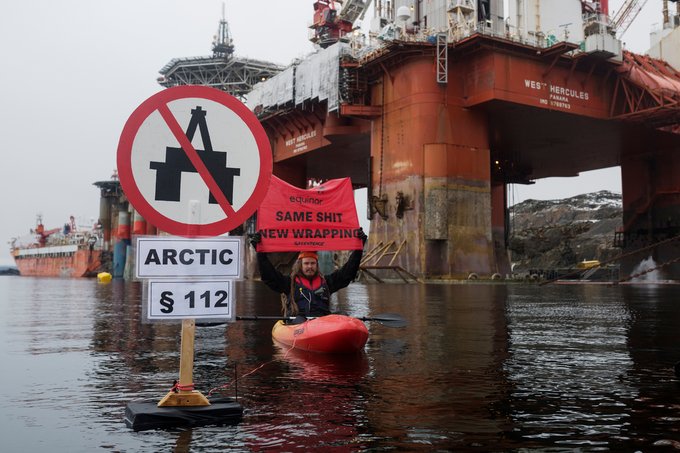