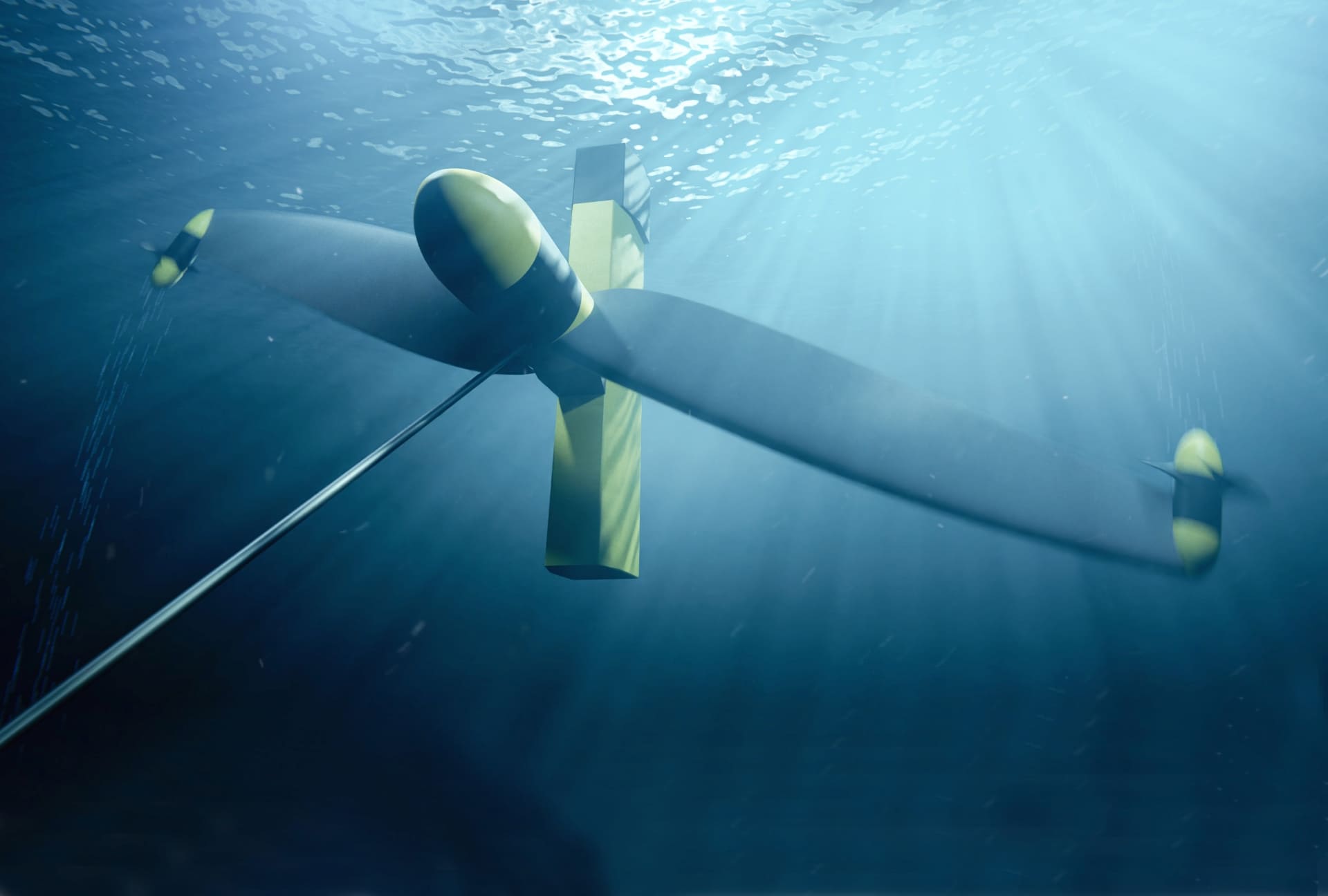 Synthesizing years of preparation, Equinox had their first public presentations in October, with their website going live and at their booth at the Damen Maritime Festival. Renderings of large underwater turbines are shown. Design in progress is on display. Impressively large two-bladed turbines that position themselves in the ocean’s currents. Turbine blades are to be constructed from concrete, the tough building material that is calculated to be able to withstand the typical kind of loads, vibrations and pulsations, that occur on long and slim appendixes like turbine wings under water.

Predictable
Equinox founders and early investors share a vision on the unexplored possibilities of ocean current. They believe it has potential to be the world’s third source of renewable energy after wind turbines and solar panels. The waterflows in oceans always move in the same direction, mostly at the same speed. Sailors know the currents for trade routes. The speed may vary from two up to five knots of water speed.

This implies that a big turbine should be used with a slow moving, but high-torque generator. Yet, the steady flow offers a lot of benefits compared to tidal current. Instead of increasing from zero to up to eight knots of water speed and changing direction every six hours, ocean currents are constant and very predictable. “Turbines typically do not like the slow water speed, but our two-staged turbine concept does,” de Haas explains. “All of the other components and the total systemlove low speeds. Bearings, the anchoring and electricity transfer cables, the blades. A one-way current at always the same speed is much less demanding for the materials than fast water flows that change direction. Another big advantage is that the turbines can be installed by smaller, relatively simple vessels that do not require DP2 dynamic positioning as they operate on water with a one-way current of only a few knots.”

Pioneering
It is the steadiness and predictability of ocean currents that convinces the innovators that this energy source may well develop into the world’s third largest source of renewable energy. De Haas and van Dijk show maps and research that show the actual currents flowing through the oceans. Using this information and insight ideal locations for installing turbines can be selected. Starting in places that have constant and relatively strong current near shore, beneficial for power to shore infrastructure, operations for installing are better manageable and cost effective. Equinox and partners calculate that the potential of ocean current energy production globally is in the range of 700 gigawatt. Large numbers of turbines can be installed to capture this potential. For this reason, CEO Arnout Damen and his fellow directors at various disciplines within the Damen Group support the ocean current energy entrepreneurs. “This turbine does not look like a ship,” De Haas adds, “But it can be built at a yard locally, and be installed and serviced by Damen designed vessels. This new product development is in line with the ambition to become the most sustainable shipbuilder in the world.”

Giants
While Equinox is currently a three-person start-up, they are looking for large-scale industrial partners either on the installation or energy exploitation side. Damen is the first partner of Equinox and can contribute in numerous ways, such as developing and building the turbine. Nevertheless, Equinox is in search of parties for long term  co-operation in order to install ocean energy turbines at large scale. This needs to be done in a reliable way and with  connections to local power grids. Ideally, a park of ocean current turbines, installed near the shore, should connect to the land-based network to provide the local population of electric power. In the case a sea-based wind turbine park is nearby or other power supply infrastructure, it would be quite cost effective to create a co-connection with this existing grid connection, making both more cost efficient.

Wing tip generators
Engineering efforts are now aiming to increase efficiency and cost effectiveness of the turbine installations that are to harvest the ocean current’s energy potential. As the turbine blades move at low rotations per minute, a large generator with high torque would be needed to provide a viable amount of power. High torque alternators are expensive and often require gearing. That is the reason Equinox has come up with the idea of installing tip generators at the ends of the turbine blades, a so called two-staged turbine. With a 50 meter blade span, the tips move through water at considerable speed. Small high speed generators at these tips provide a lot of electricity. This kind of equipment is competitive in aspects of energy production versus cost. “Our goal is really to develop turbines that are efficient to build and require minimal maintenance, in order to provide electric power at minimal cost. The ocean current energy will have to compete with other sources that provide power to any country’s electricity grid,” van Dijk explains.

Self-aligning
The structure with two blades and central housing of the bearings and electrical connections, will float. It can be transported over the water, using relatively small towing boats. Once at the spot where the turbine can be installed, the structure can be connected to the anchoring cable that also contains the electrical connections. When connected, ballast water will be pumped in the body behind the blades. The changed position of the ballast water will cause the turbine to tilt to its vertical position in the water. Anchored to the seabed, the turbine will now automatically position itself in the current. It remains vertical and finds a position that has the blade tips in their upper position several tens of meters under the water surface. The turbine will not interfere with shipping. Fishing ships will be able to take notice. “When studying the water movement in areas where we plan to install turbines, we find that in water depths of 250 to 400 meters, the strongest currents are not down in the deep but near the surface, at 50 tot 150 meters of water depth,” De Haas explains.“That is where we should have the turbines operate.”

Proof
Following their first public appearances, Equinox is now identifying and talking with investors to join in the course towards the exploration and exploitation of the world’s third clean energy source. Steps planned are the installation of a test turbine in the Netherlands, near an inlet from the North Sea into the Waddenzee. At the same time the team is working hard to develop the full commercial version, grow the team and contract an energy site location in Japan, Kenia, or South Africa.