The maritime and offshore industries might be on the brink of a breakthrough discovery when it comes to oil spill response.

Even though still in development stage, the product, dubbed Ecotech absorbent, could, according to her, usher a new age in cleaning of oil spills.

Composed of solely minerals and salt, all non-toxic, easily degradable materials, the new-generation absorbent has the ability to take up 110 pct. of its own weight.

In an unofficial small-scale experiment conducted by Professor Murk, the features of the Ecotech absorbent were compared to that of a conventional dispersant.

The experiment entailed adding of one milliliter of oil to water in a small glass beaker, followed by adding of a dispersant and the absorbent to see their effects.

When applied to the same type of oil from the 2010 Macondo accident in the Gulf of Mexico, a concentration ratio of up to 1:20 of COREXIT 9500 dispersant forced the oil to the sides of the beaker. Subsequently, the liquid was stirred and the dispersant sent the oil particles down, removing the oil from the surface. However, the oil particles preserve their stickiness making them dangerous to the sea ecosystem.

On the other hand, when applied to the same mixture, the floating Ecotech absorbent particles take in all the oil in seconds, leaving the water almost intact.

Once absorbed, the oil remains in the particles, whereas the water refuses to get in. Only by squeezing hard can the oil be recovered from the absorbent.

After stirring, dipping of a white paper test strip into the beaker showed there was hardly any trace of the water being contaminated.

As seen in the video (00:25), even when oil and water are poured onto the absorbent simultaneously, the oil gets in, whereas the water goes through freely without getting polluted.

As explained by Professor Murk, this means that both produced water and skimmed oil could be reused after applying of the absorbent.

The product has been tested in cold and salt water but not yet in icy conditions.

Additional research is necessary to define the exact ratios and effects of the absorbent to make it a real product.

What is more, Professor Murk is looking for a partner to prompt the product’s development. 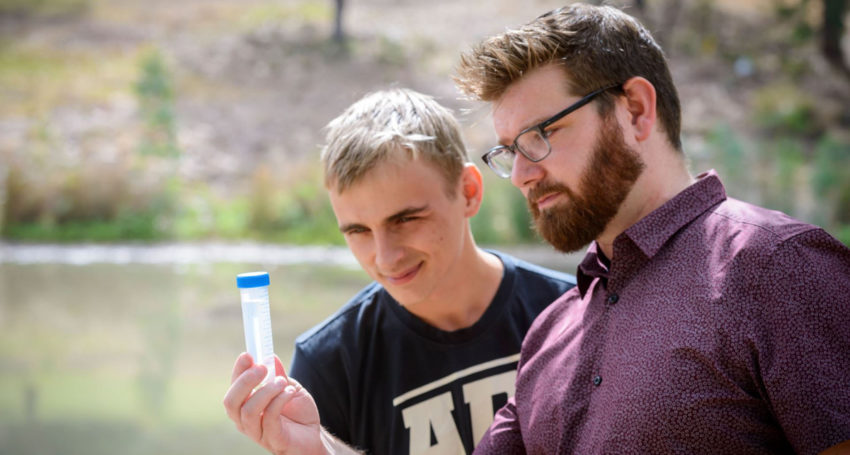