VMAG’s so-called ‘Big Project’ entailed the conversion of a former offshore supply vessel to a superyacht. According to the company, it is the biggest project in its 30-year history.

The former offshore supply vessel drastically changed shape since transformation work began in Louisiana in 2015 and is now the largest private converted yacht ever created in the United States.

The vessel was launched initially in 1997 as the 63-meter Candy Trader offshore supply vessel, later renamed HOS Trader. The decommissioned vessel was bought by Hornbeck Offshore which began a three year conversion into an explorer yacht.

First work done on the vessel was the lengthening of the platform, restyling the bow area, and adding several superstructure decks for a completely new look.

The body extension and redesigned bow work took place at Leevac Shipyards. The then renamed Voyager was due to be completed at the American refit facility Diana Cut in 2015.

However, it was determined that it would be best left at Leevac to complete the additional 300 tonnes of steelwork.

Voyager was then towed from Houma to Fort Lauderdale’s Dania Cut for the completion of the conversion. Due to the complexity of the project, the delivery schedule was moved several times from December 2016 to March 2017 and now to a 2019 delivery.

The superyacht was also repowered with the installation of new generators and a complete interior rejuvenation by two separate contractors. The vessel also boasts six decks with a helipad, spa room, dive centre, and extensive storage for tenders and water toys.

It is worth noting that the Voyager is not the first former offshore supply vessel that was converted to a yacht, with other examples being the Suri, Global and Mystere Shadow but it is the largest converted yacht. 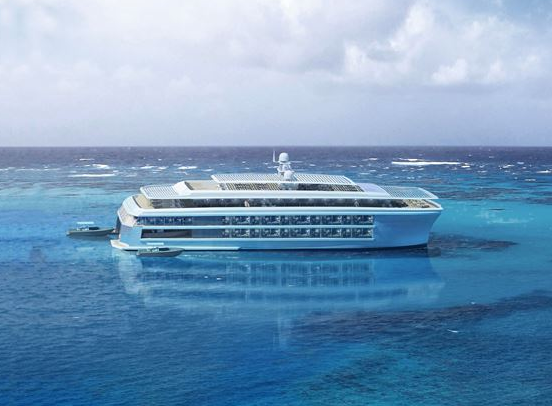