Over 6,000 container moves were accomplished in 18.5 hours or a gross berth productivity rate of over 300 shipshore moves. As explained, this was an “exceptionally high performance standard” in container shipping operation.

A celebratory event was attended by over 100 representatives from ONE and PSA Singapore.

“This was a significant occasion for both ONE and PSA, as it not just represented the highest productivity rate by
far demonstrated by an operating vessel of ONE, but also served as a new operational benchmark for PSA,” ONE said.

Last month, ONE and PSA unveiled plans to form a joint venture container terminal based at Pasir Panjang Terminal. Subject to regulatory approvals, the terminal is scheduled to commence operations in the first half of 2019 and operate four mega container berths with a combined annual handling capacity of 4 million TEUs.

ONE was established in July 2017 by the integration of three Japanese shipping companies – K Line, MOL and NYK. 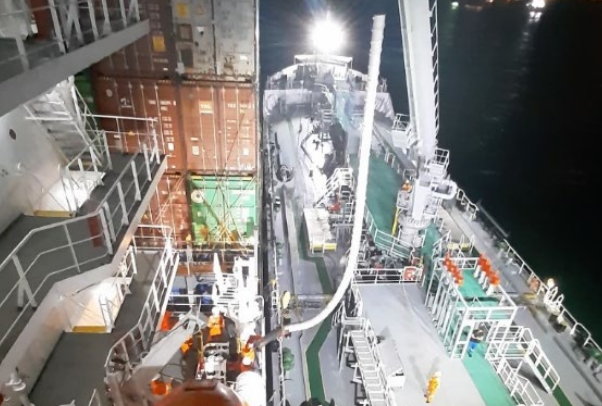 ONE wraps up 3rd biofuel trial to support shipping’s decarbonization
Posted: about 1 month ago
CMA CGM, PSA team up on digital solutions to cut CO2 footprint
Posted: 11 days ago
PSA, ONE set up eco-friendly barge service at Jurong Island Terminal
Posted: 5 months ago
Update: 60 containers went overboard from ONE boxship
Posted: 4 months ago
ONE boxship loses over 30 containers in North Atlantic
Posted: 4 months ago