Polskie LNG, a GAZ-SYSTEM company, together with Szczecin and Świnoujście Seaport Authority, has picked the contractor for the Polish LNG terminal expansion project.

The agreements were signed with the consortium of companies PORR and TGE Gas Engineering, GAZ-SYSTEM said in its statement.

The investment project completion date is the end of 2023, the statement reads.

The agreements relate to the extension of the on-shore as well as off-shore part of the LNG terminal conducted in cooperation with the Szczecin and Świnoujście Seaport Authority in the design&build formula.

The scope of the agreements covers the development of the design documentation (Building Permit Design and Detailed Design), the performance of construction and erection works, commissioning of the system and obtaining of the required permits.

Polskie LNG shall be competent for, among others, construction of the new LNG tank with a capacity of 180,000 gross and performance of the process part of the new berth intended for LNG loading, unloading and bunkering.

“The investment project is an essential element of the strategy to increase the energy security of Poland. The national transmission system is consistently expanded to switch from the presently prevalent east-west direction of supply to the northern direction. Apart from the expansion of the LNG terminal in Świnoujście, GAZ-SYSTEM Capital Group has been successfully pursuing a number of strategic investment projects such as: the Baltic Pipe Project, the North-South Gas Corridor or the Poland–Lithuania gas interconnectors. Thus we are building Poland’s energy independence and laying grounds for gas market diversification in our part of Europe”, said Piotr Naimski, Secretary of State in the Chancellery of the Prime Minister, Government Plenipotentiary for Strategic Energy Infrastructure.

“By the end of 2023, with the completion of this investment project, the regasification capacity of the LNG terminal will reach approximately 8.3 billion cubic meters per year”, Tomasz Stępień, president of the management board of the LNG and GAZ-SYSTEM companies said.

He added that upon its extension, the operational flexibility of the facility will improve, and new gas storage possibilities will open up, which will in turn increase the number of handled LNG carriers, translating directly into heightened security in terms of natural gas supply to the national transmission system.

“New services will also be provided, which will drive the growth of the gas market in Central and Eastern Europe”, said Stępień said.

“The extension of the LNG terminal by another jetty is a natural step in the process of building its potential. It will also provide an additional development boost for the entire Szczecin-Świnoujście port complex”, Krzysztof Urbaś, President of the Szczecin and Świnoujście Seaports Authority said.

He added that this investment project is extremely necessary since the demand for LNG fuel is on the rise, as a result of the sea industry’s growing concern for the environment.

“Therefore, with this project, we also want to meet the expectations of shipping companies. The Świnoujście Terminal has opened up new opportunities for the port, the city, and the entire region. This particular project may contribute to Świnoujście securing a leading role in the Baltic transshipment of LNG”, Urbaś added.

This year, in parallel to the tender for the contractor for extension of the LNG terminal in Świnoujście, open season procedure has been held which allows the gas fuel market agents to submit a proposal for regasification service and additional services.

On May 29, Polskie LNG and PGNiG signed an agreement for services that will be available after completion of the expansion.

The expansion is covered by co-financing from the Operational Program Infrastructure and Environment 2014-2020, in the amount of 461 million Polish Zloty ($116.9 million). 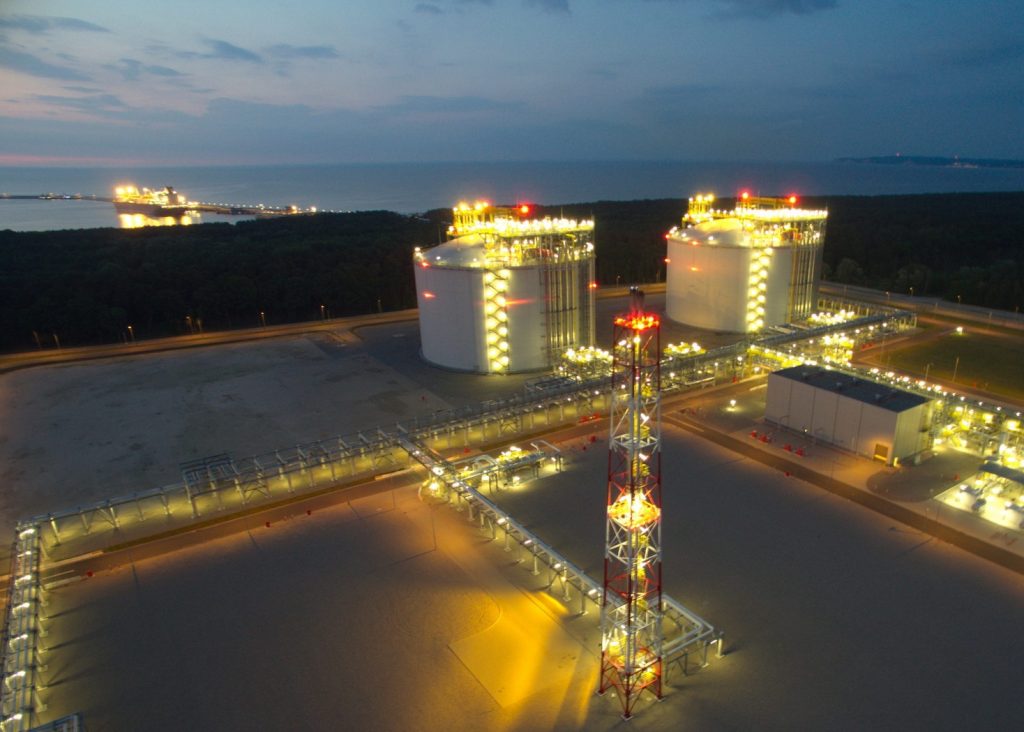