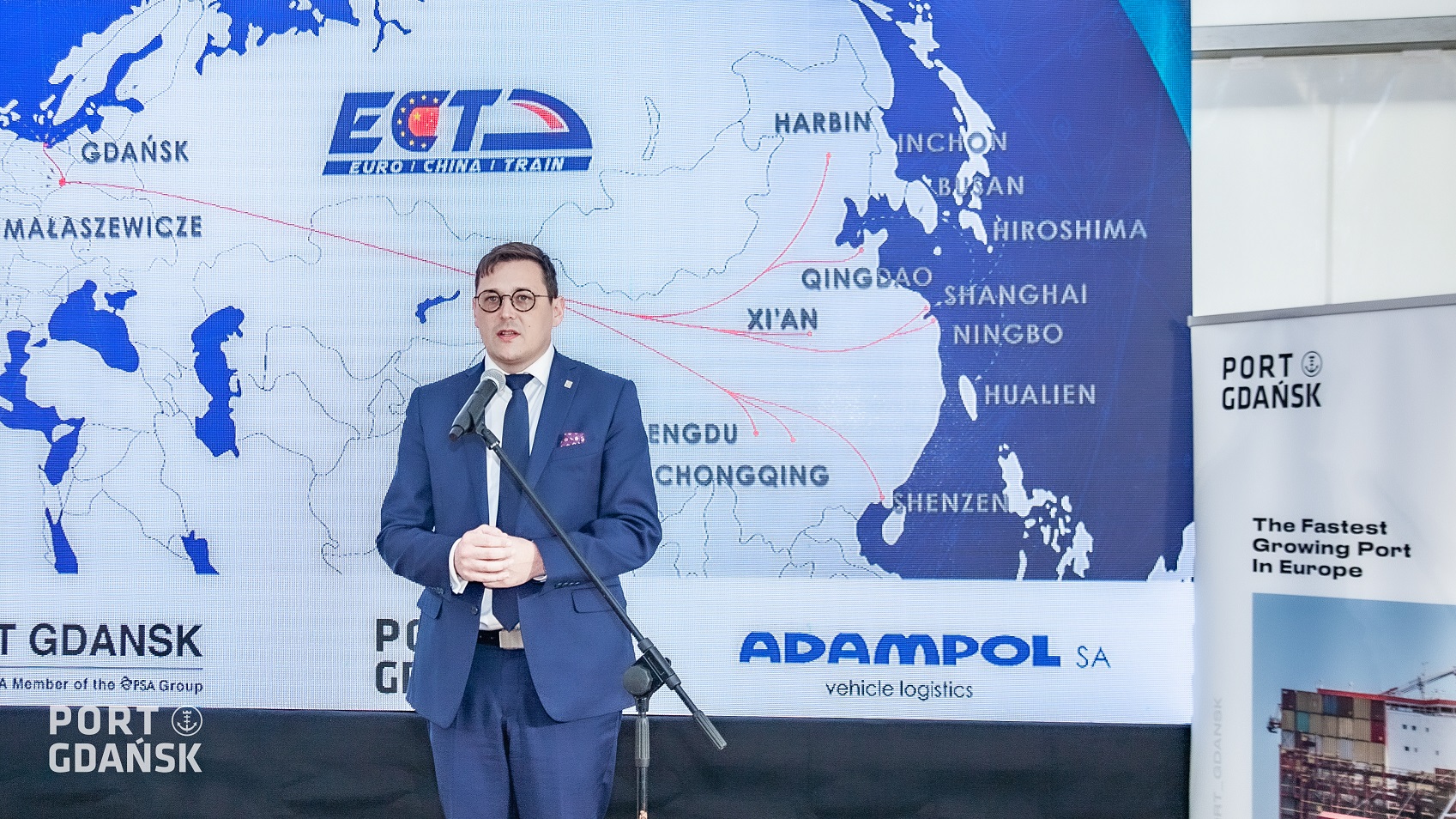 Back to overview
Home Green marine Port of Gdańsk CEO: 2020 Will Be of Historic Essence for Us

Port of Gdańsk CEO: 2020 Will Be of Historic Essence for Us

Poland’s Port of Gdańsk, one of the biggest seaports in the Baltic Sea, is preparing for an important milestone of becoming the busiest container port in the region.

As of now, the difference between the Port of Gdańsk and the Russian Port of St. Petersburg, the currently leading Baltic port, is only 122,000 TEUs, meaning that Gdansk is very close to achieving its goal.

“The huge impact on the projected increase is tied with the Euro Chain Train (ECT), which directly connects China with Gdańsk. Starting January 2020, Gdańsk will regularly receive regular railway services from Xi’an through Małaszewicze to Gdańsk.”

As explained, this connection offers many new possibilities not only for the port but for shipping companies as well, allowing a much faster route to the Scandinavian and British markets. The first train on this route arrived on November 24 from Xi’an, taking only 10 days.

However, the port’s ambition reaches far beyond that, according to Greinke. The current investments, and those planned such as the flagship project, the new Central Port, are to accelerate container throughput to up to 7,000,000 TEU.

The projects also include a plan to modernize the majority of the quays in the Internal Port. This will allow for more and bigger vessels to be serviced in this area of the port, Greinke continued.

The road and rail infrastructure linked to the Port of Gdańsk is also said to be a subject of very extensive works, focusing on modernizing and adding new connections leading straight to the port.

When asked about the main facilitator of the container volume increase at the Port of Gdańsk, Greinke said that Poland is experiencing continuous economic growth as it has become one of the most versatile markets within the European Union. This year’s annual growth is expected to reach 4,3%, with consumption remaining its main engine.

“This also applies to the Port of Gdańsk, the largest Polish port. I believe that this is due to our excellent understanding of Gdańsk’s geographic and economic strengths. We are the only port in the Baltic regularly receiving calls from the biggest shipping lines. The biggest vessels in the world, including the Gulsun class, can enter the port.”

Additionally, the port is said to have the fastest connection with Eastern Europe – mainly to Poland, the Czech Republic and Slovakia, Hungary, Belarus and Ukraine.

“These all strengths add up to form the outstanding performance of our port not only on a European scale but worldwide,” the Port of Gdańsk CEO pointed out.

During a recent visit of a maritime and business delegation from Poland to Singapore, the Port of Gdańsk Authority outlined plans to build the EUR 2.8 billion Central Port in order to complement Gdansk’s operations. The envisaged port has been described as “the biggest maritime investment project in Europe”.

“It is the biggest investment ever to be realized in our port. Due to the huge and diverse scale of the project, it has been divided into 4 stages and scheduled to be fully finished by 2029,” Greinke commented.

“The Central Port will have a tremendous impact on the overall number of cargo handled, reaching 100 000 mn tonnes in 2045.”

As of November 2019, the overall technical documentation for the Central Port has been completed. The Port of Gdańsk’s main focus at this stage is to acquire potential investors to operate in the Central Port. The port’s CEO informed that this year only, the Port of Gdańsk signed a number of agreements with different companies, such as Gdańsk Shipyard, expressing their interests in the investment.

Specifically, it will be possible for some of the four project stages to be carried out simultaneously. The first stage, ‘Stage 0’, is focused on establishing the necessary base for the Central Port in the offshore part. This will also include completing the access and technical infrastructure.

Moreover, ‘Stage I’ concentrates on building a new set of breakwaters, and commencing the construction of the new terminals — container, passenger, roll-on/roll-off (RoRo) and automotive. This stage will also include the construction of the Local Traffic Controle Centre. Greinke noted that the timeline of ‘Stage 1’ heavily relies on potential investors.

In addition, ‘Stage II’ involves the construction of other terminals, mainly the universal and chemical ones. The final construction of breakwaters is scheduled to be finished at this stage. ‘Stage II’ will also be marked by the completion of a shipyard pier. It is estimated to take four years, however, Stage II and Stage II may be carried out simultaneously.

The remaining part of the Central Port project is ‘Stage III’, which involves the construction of an LNG terminal and a power plant. New technical infrastructure, mainly cold production facilities and warehouses are also scheduled for this stage which is estimated to be completed in six years.

“We estimate that the construction of the first terminal and its accompanying infrastructure will take place in 2024. This is related to the time we need to negotiate commercial terms and conditions, alongside various permits and legal decisions.”

“LNG market continues to grow in response to the strong ongoing demand. Our response lies with the Central Port, which involves the construction of an LNG terminal, and an LNG power plant. We also plan on investing in a floating LNG terminal, greatly increasing our bunkering capabilities.”

Earlier this year, Singapore’s terminal operator PSA International, the Polish Development Fund (PFR) and the IFM Global Infrastructure Fund (GIF) acquired the Deepwater Container Terminal (DCT) Gdańsk. DCT Gdańsk is one of the fastest-growing container terminals in Europe and the only terminal in the Baltic that can serve ultra large container vessels (ULCVs) with a capacity of up to 23,000 TEUs.

Speaking of the terminal and the transaction, CEO of the Port of Gdańsk said:

“DCT Gdańsk is the biggest container terminal in the Baltic, located at the very crossroads of the Baltic deep-sea trade routes.

“It would only seem natural the PSA … was interested in acquiring DCT, expanding its services in this region of Europe. DCT Gdańsk consists of two deep-water terminals, and a new, third terminal is planned to be constructed.”

The cooperation between Poland and Singapore is set to strengthen in the future as well, following the Singapore Maritime & Business Mixer organized in October. According to Greinke, the main goal was to stimulate business relations between the Singaporean and Polish companies, at the same time presenting the potential of Gdańsk.

“The Port of Gdańsk serves as an access point to over 120 million customers for the Asian companies, and our intention was to highlight this business opportunity to those, who have not yet taken it.”

As the shipping industry is witnessing a surge in investments into smart technologies, WMN wanted to find out in what way the Port of Gdańsk is facilitating digitalization.

“The Port of Gdańsk, as one of the first ports on the Baltic Sea, strives to implement new systems in practice. Our key systems are Navigate, which allows customers to check for a possible delivery route via sea. The system is easily accessed by our website,” the port’s CEO explained.

“Another project we’re focused on is the National Single Window, which will enable data flows between the shipping industry and legal authorities. During the China International Logistics and Supply Chain Fair in 2018, together with several other main world ports, we signed a declaration of building this worldwide initiative.”

Commenting on the impact of Brexit on the Baltic Sea ports, particularly the Port of Gdańsk, Greinke optimistically said:

“We believe Brexit will present us with many new possibilities. With the British ports closing to its partners, the Port of Gdańsk has a great chance to fill in, and become a new European hub instead.”

“The key advantage is our great access to the Central and Eastern Europe regions. The completion of the Central Port, and subsequent increase in transshipment capability are essential to preserving the flow of the European transport markets.”

“Our main goal and ambition are to dominate the Baltic Sea trade.”

In his view, this can be achieved by developing a range of comprehensive port services, connecting Poland with the rest of the world on many different levels.

“Our quest is not to just keep up with the ever-changing smart technologies, but to actually lead, and set an example to follow for the other European ports. The many ongoing investments will result in the Port of Gdańsk having an excellent connection with the hinterlands,” the Port of Gdańsk’s CEO highlighted.

“The biggest factor in becoming the number one European port, in addition to being the fastest-growing port in Europe, is the visionary project of the Central Port,” Greinke concluded.