The Port of Long Beach has reached a tentative agreement on a 40-year, $4.6 billion lease with Orient Overseas Container Line (OOCL) for the Middle Harbor property, in what would be the largest deal of its kind for any U.S. seaport, Port of Long Beach Executive Director J. Christopher Lytle announced Thursday.

The lease has been agreed to in principle by Hong Kong-based OOCL and its U.S. subsidiaries OOCL, LLC and Long Beach Container Terminal (LBCT).

The agreement will go to the Long Beach Board of Harbor Commissioners’ Finance and Administration Committee for review. The Middle Harbor terminal is projected to generate more than 14,000 new, permanent jobs throughout Southern California by 2020.

“This agreement represents a major endorsement of our vision for the Port by one of the leading maritime companies in the world,” said Lytle, who made the announcement during his annual “State of the Port” address Thursday at the Long Beach Convention Center.

“We thank OOCL and LBCT for sharing in our commitment to this community and the city of Long Beach. We look forward to working with them to bring more jobs and economic vitality to Southern California while building the most technologically advanced and greenest container terminal in the world,” Lytle said.

“This is a historic day, not just for the Port and for OOCL, but also for all who will benefit from the new jobs and cleaner air that will be generated by the Middle Harbor project,” said Long Beach Harbor Commission President Susan E. Anderson Wise. “This proposed agreement will enable the Port of Long Beach to maintain its competitive edge while bringing many benefits to the community.”

“I am very pleased that OOCL has reached an agreement with the Port of Long Beach to operate the Middle Harbor Project,” said OOCL Chief Executive Officer Philip Chow. “It demonstrates our long-term commitment to the Port of Long Beach as the gateway of choice for North America and solidifies our economic partnership with the region. We look forward to seeing the positive impact that this commitment will have for years to come.”

The Port is investing $1.2 billion to develop the new 300-acre-plus Middle Harbor terminal, while OOCL and LBCT will invest approximately $500 million in the latest cargo-handling equipment.

The lease would secure a tenant for the Middle Harbor Redevelopment Project, which combines Pier F and E into one state-of-the-art container terminal. LBCT has occupied Pier F since 1986 and will operate the Middle Harbor Terminal.

The new terminal will effectively double the existing capacity by utilizing the most advanced cargo-handling technology in the world. It will also be the greenest terminal in North America, cutting air pollution in half through the use of more on-dock rail, electrified cargo handling equipment and shore power, which allows vessels to draw electricity from a landside utility when docked rather than diesel-powered auxiliary engines.

OOCL has been an important partner in the Port’s green initiatives. Its ships have a near 100 percent participation in the Port’s Green Flag Program, which provides rebates to vessel operators that slow down in and near the Port to cut down on air pollution. As a gesture of its commitment to the Long Beach community, OOCL has donated its Green Flag Program rebates to Long Beach parks and schools.

The Port of Long Beach is one of the world’s premier seaports, a primary gateway for transpacific trade and a trailblazer in innovative goods movement, safety and environmental stewardship. With 140 shipping lines connecting Long Beach to 217 seaports worldwide, the Port handles trade valued at more than $155 billion each year and supports hundreds of thousands of jobs in Southern California. Founded in 1911, the Port enters its second century with more than $4 billion in planned capital improvements over the next decade to support trade growth and strengthen its ability to serve the goods-movement industry, Port clients and the community.

OOCL, the first Asian shipping line to transport containerized cargo across the Pacific, is one of the world’s largest integrated international transportation and logistics companies. OOCL is one of the leading international carriers serving China and provides a full range of logistics and transportation services throughout the country. It is also an industry leader in green practices and the use of information technology. 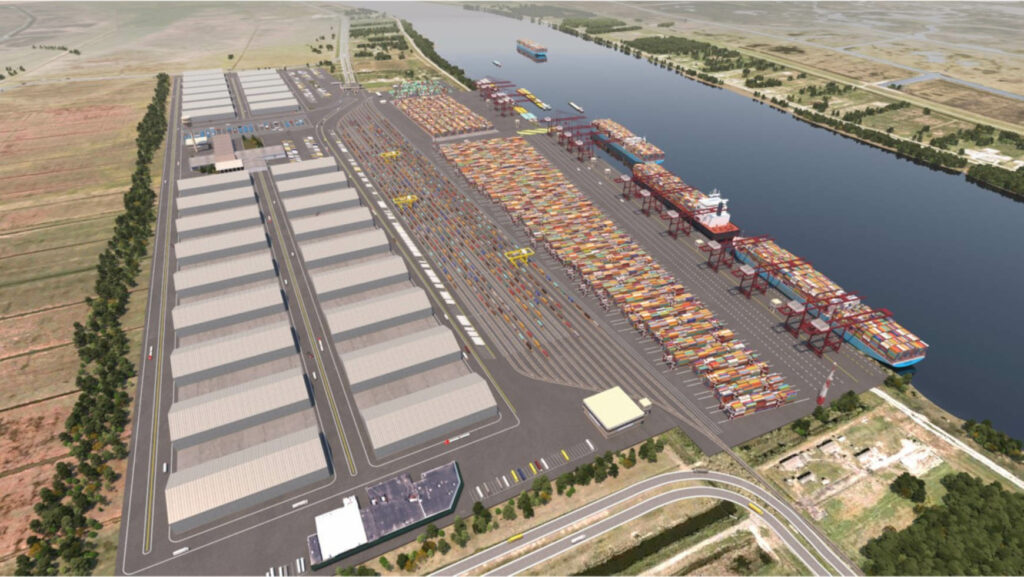