According to Wisnu Santoso, a director at PIS, who was cited by Reuters, the company is looking into both newbuilds and existing vessel opportunities as it seeks to reduce the average age of the fleet which is nearing 20 years.

The investments are expected to include acquisitions of LNG carriers which are currently not part of the company’s massive fleet of over 400 vessels. The foray into the LNG transportation business has been assigned to the expected increase in demand, especially as the uptake of LNG as fuel to cut GHG emissions increases.

The plans are being announced on the back of last month’s investment deal between Pertamina and Japanese shipping major NYK. The duo said that the investment builds on a strong collaboration with PIS in ship management in the field of energy transportation.

The strategic partnership agreement will pave the way for cooperation in various fields including those associated with crude oil, petroleum products, LNG transportation, floating storage, and regasification units (FSRUs). In addition, NYK and PIS intend to collaborate on carbon capture and storage (CCS), for which demand is expected to grow in the future to realize a carbon-neutral society.

Pertamina is already exploring the potential for large-scale deployment of low-carbon technologies in Indonesia. The oil and gas major teamed up with ExxonMobil last year to identify and evaluate potential subsurface CO2 storage locations and examine the feasibility of transporting CO2 in Southeast Asia.

In addition, U.S.-based Chevron is looking into lower carbon business opportunities in Indonesia with Pertamina, including CCUS and hydrogen.

Under the agreement, the parties will explore the feasibility of developing a green hydrogen facility, with a capacity of at least 40,000 tonnes per annum, powered by 250-4000 megawatts of geothermal energy in the initial phase. 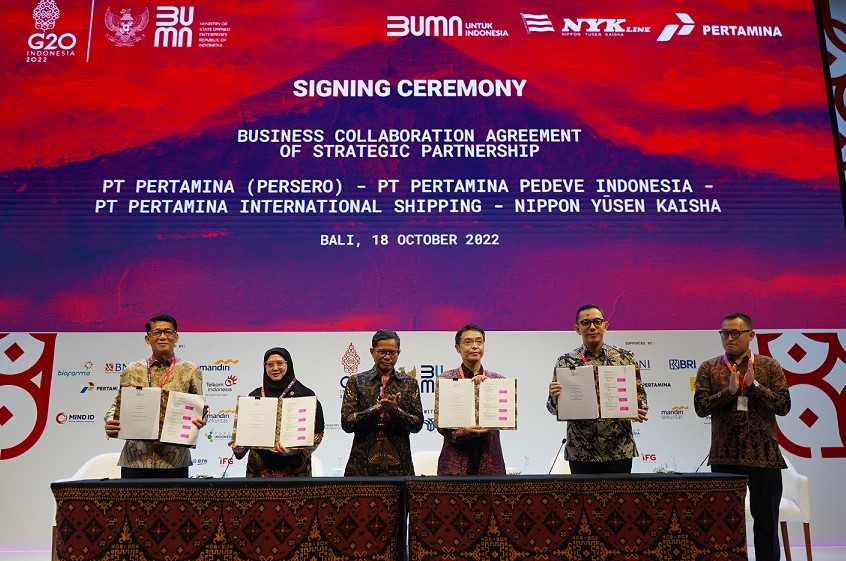 NYK invests in Pertamina’s shipping subsidiary
Posted: about 1 month ago
Chevron, Keppel, Pertamina to explore green hydrogen and ammonia projects in Indonesia
Posted: 18 days ago
Chevron and JERA jointly pursue lower-carbon solutions in the US and Asia Pacific
Posted: 21 days ago