Sonardyne International Ltd.’s Ranger 2 USBL acoustic positioning system has played an important role in the recent discovery of the world’s deepest known undersea volcanic vents by a team from the National Oceanography Centre (NOC) in Southampton.

The expedition used Ranger 2 to track the Remotely Operated Vehicle (ROV) Isis from the RRS James Cook, 5,000 metres beneath the surface as it recorded video and imagery whilst collecting samples from the newly discovered vents in the Cayman Trough.

The expedition, funded by the Natural Environmental Research Council (NERC), saw the researchers, from NOC and the University of Southampton, return to a set of vents – in the Beebe Hydrothermal Vent Field – that they discovered during an expedition in 2010. At the time, these were believed to be the world’s deepest. Geraint West, Head of NOC’s National Marine Facilities, Sea Systems, which provides ships and submersibles to the UK marine science community on behalf of NERC, explained: “The science team and ROV crew came across a further set of vents located even deeper at 4,968 metres, or almost three miles beneath the ocean surface. NOC has used Sonardyne’s positioning systems since the Isis ROV was first commissioned in 2003 and the Ranger 2 system is central to Isis’ precise positioning system. This enabled the ROV to explore this latest discovery; using various sensors and samples, they were able to determine that these vents are among the hottest on the planet, blasting out water at around 401°C.”

“Our partnership with Sonardyne means that we are able to take the leading edge equipment they produce and test it in the field – in some of the planet’s most extreme environments. We look forward to discussing further opportunities during Ocean Business, which is hosted at NOC’s Southampton waterfront campus, this week.”

Designed for deepwater, long range tracking of subsea vehicles and part of Sonardyne’s Sixth Generation (6G®) product range, Ranger 2 offers precise acoustic ranging, fast data telemetry and hardware that is easy to set up and operate. With the extreme water depths associated with research expeditions and the importance of precise monitoring and ROV navigation, these features made Ranger 2 the USBL positioning system of choice for the NOC.

“Sonardyne and the NOC have a long standing technological relationship and have worked together on many expeditions. Isis is currently equipped with our deep-rated Compatt 5 transponders but now RRS James Cook has returned to Southampton, we will be upgrading the ROV with one of our deepwater Wideband Mini Transponders (WMTs),” said Simon Goldsworthy, Sales Manager at Sonardyne International. “WMT is fully compatible with our 6G range and offers full two-way Wideband 2 interrogation, which is far more robust when operating in acoustically noisy environments. The longer Wideband 2 transmissions provide greater signal and ultimately maximise positioning precision for the vessel and it’s ROV.” 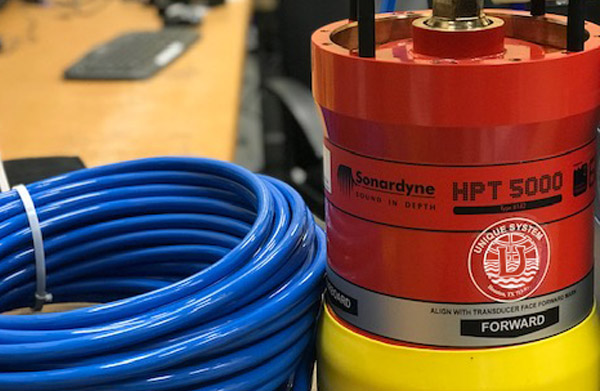