The shipyard built the ship in cooperation with  the city government of Ulsan, South Korea, and the Ulsan Information Industry Promotion Agency (UIPA). The contract is part of the “ICT convergence electric propulsion smart ship construction and demonstration project”. The partnership focused on technology design, construction, and certification of Korean smart electric-powered ships.

The construction of the unit started back in December 2022, marked by a traditional steel-cutting ceremony.

The electric propulsion solution installed onboard the ship is developed by Korea Shipbuilding & Marine Engineering. The ship incorporates DC Grid-based electric propulsion system to maximize fuel efficiency, and dual-fuel LNG engine capable of driving it at up to 16 knots.

During the vessel’s sea trials, HMD achieved a reduction of carbon dioxide (CO2) emissions during operation by 40% compared to conventional marine diesel engines and improved fuel efficiency by 6% through optimal engine control.

Also, it is the first eco-friendly smart ship in Korea that will include four core ITC convergence technologies.

In addition, it will have the latest smart ship technologies for passenger safety, such as the ‘ smart maintenance function ‘ that self-diagnoses aging equipment.

Ulsan City will complete the operation test run by December and tUlsan Taehwa will start operating from 2023. KSS Marine Co., a specialized ship operation subsidiary of KSS Shipping Co., has been selected as the operator of the ship. 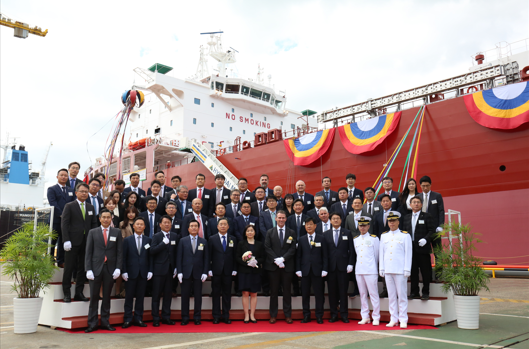