The eco-friendly sea vessel will carry shipments of ethane gas from Houston in the US to SABIC’s Olefins Cracker at Wilton on Teesside, the UK, under a long-term time charter.

The 28,580 gross ton GasChem Beluga made its maiden voyage from Shanghai through the Panama Canal to Houston in December to mark the official start of the contract hiring period.

The vessel, which features a length of 188.3 meters and a width of 29 meters, is able to operate on HFO, MDO and gas oil as well as LNG and is one of the world’s first to operate on ethane.

Chemical manufacturing company Saudi Basic Industries Corporation (SABIC) recently converted its Teesside cracker during a major investment to enable it to take ethane gas alongside other feedstocks. Next to the modification of the cracker itself, the conversion project required the construction of a new cryogenic ethane tank and purpose-built ships to transfer the ethane.

Built at Sinopacific Offshore and Engineering shipyard in China, the ship was designed and developed for SABIC by Hartmann Reederei in cooperation with engineering consultants HB Hunte Engineering.

The ship’s design focused on building the Eco Star 36K with ‘svelte’ bow design which enables the vessel to improve seakeeping at higher transit speeds and improved fuel efficiency. The new vessel type differs from conventional gas carriers, as its superstructures are located at the bow. This results in an optimized distribution of weight and, therefore, a reduced demand for ballast water, according to SABIC.

The GasChem Beluga – which will be joined by a sister vessel the GasChem Orca in July – marks a new generation of semi-refrigerated ethylene/ethane carriers, designed for environmentally friendly operations with minimum emissions at a maximum of reliability and sea endurance, SABIC said.

The new ships with a cargo capacity of 36,000 cbm each for liquefied gas cargoes up to -104° C will reduce emissions of nitrogen oxides, sulfur oxides and soot particles by running engines on clean gas. 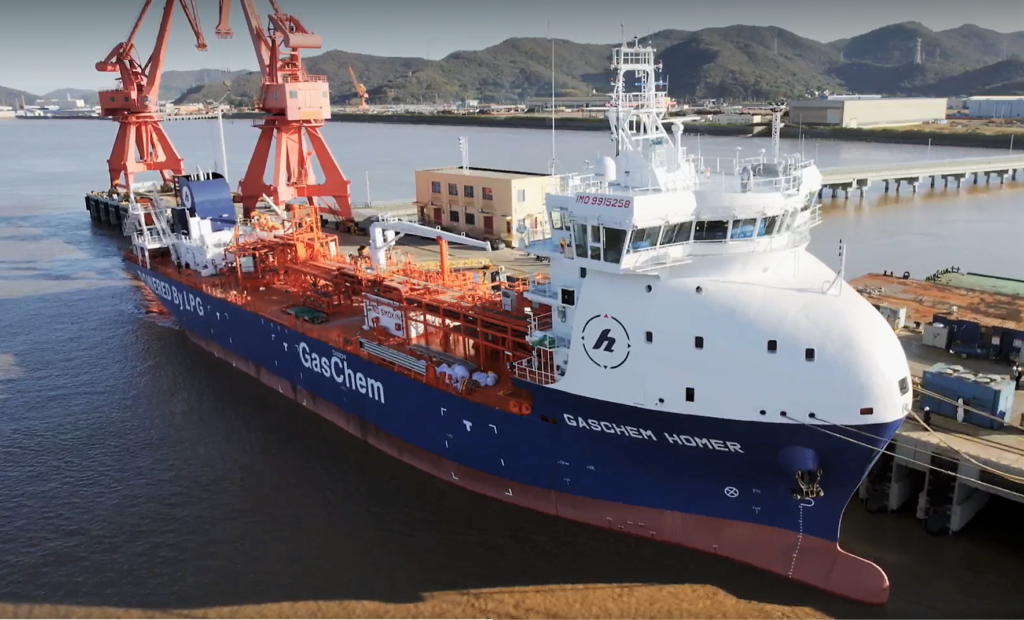