The Netherlands will build floating solar parks on a large scale in the coming years. First on inland waters and then at sea.

According to Solar Future, in 2023, already 2 gigawatt-peak of floating power will have been realized, scientists and project developers predict.

The advantage of floating solar parks is that scarce land does not have to be used to generate sustainable energy. At first, mainly sand extraction ponds, dredging depots, reservoirs and basins of water companies are used. Moreover, floating solar parks generate more power than onshore PV installations, research shows.

The target of 2 gigawatt-peak on water in 2023 has been set by the National Consortium Sun on Water, the platform that combines 35 governments, science institutions and companies to work together on concrete projects.

“That target is feasible and we are well on schedule. For the period up to 2021, a SDE+ subsidy for over 500 megawatts has already been granted to floating solar parks, so that pipeline looks promising. We are not overtaking number one China with this, but we are at the forefront in Europe,” said chairman Dr Wiep Folkerts of the consortium.

“We have to build at least a thousand square kilometers of solar parks in the Netherlands if we want to meet our climate objectives. We don’t have that much space on land, so the step to water is a necessity. We did the same with wind energy, so you don’t have to be clairvoyant to predict that we will do the same with solar,” added Folkerts. “Sand extraction ponds, dredging depots and basins of water companies are all waters we don’t use for anything else. Also industrial operations can continue as normal. If you start with that, you will come a long way.”

At this moment the company has already received SDE+ subsidy for 400 megawatts and will realize at least 200 to 300 megawatts. “That means we are already taking care of 15 percent of those 2 gigawatt peaks by the end of 2020,” says CEO Roland Pechtold. “There are many sand extraction ponds and dredging depots in the Netherlands. These are industrial areas where the public is not allowed. You do not take away water from other functions, they are often connected to a grid and the installations there can run on this solar power.”

The park is divided into fifteen islands with a diameter of 140 meters, each with 4900 floating solar panels. The construction of the first three starts in September. Ultimately, a maximum of 50 percent of the reservoir will be covered, in order not to damage the ecology under water too much.

Thanks to the Floating Solar rotation system, the panels follow the sun, generating 30 percent more power than traditional PV installations. “We will soon be the largest floating solar park in the Netherlands and the largest sun-following park in the world,” said Arnoud van Druten of Floating Solar.

According to Folkerts of TNO, solar panels on large waters catch more solar radiation. Also a positive effect can be measured by the natural cooling of the panels.

After 2023, the Netherlands will also start constructing floating solar parks at sea, all experts expect. Because solar energy and wind energy are complementary and have only a 5 percent overlap, the floating solar parks could be built next to the wind farms, where sailing or fishing are not allowed.

“If we go towards the sea, an explosive increase of floating solar parks is possible, but we will have to deal with higher waves and more difficult conditions. This requires a lot of innovation, but we are working on that,” said Folkerts.

The consortium is currently having Floating Solar carry out a pilot with floating panels at the Slufter dredging depot on the Tweede Maasvlakte. Here the panels have to resist waves of one meter high. “During the storm in January 2018 we even endured waves of one and a half meters,” noted Van Druten.

If the pilot is successful, a floating solar park of approximately 100 megawatt peak will be built on the Slufter. After that the step is made towards the IJsselmeer and its adjacent lakes and finally towards the North Sea.

GroenLeven also expects to take the step towards the sea. That is why it cooperates with companies and experts from the maritime sector.

Pechtold said: “What we find complicated, for example the anchoring, is an easy solution to the maritime industry. There, everything is already floating. You can also ask yourself whether everything on the water needs to be floating. Especially in combination with wind farms. That is why we can still learn a lot from the offshore industry.” 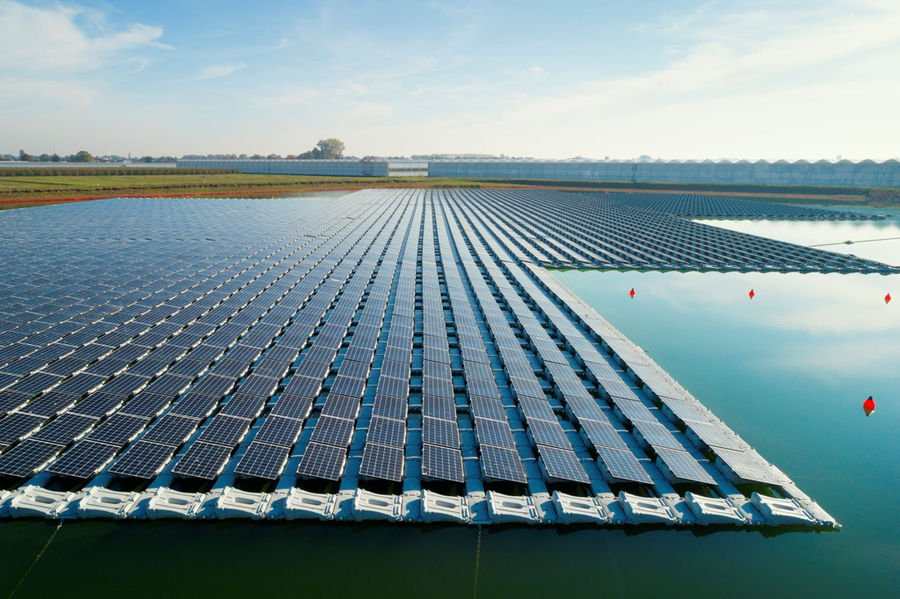