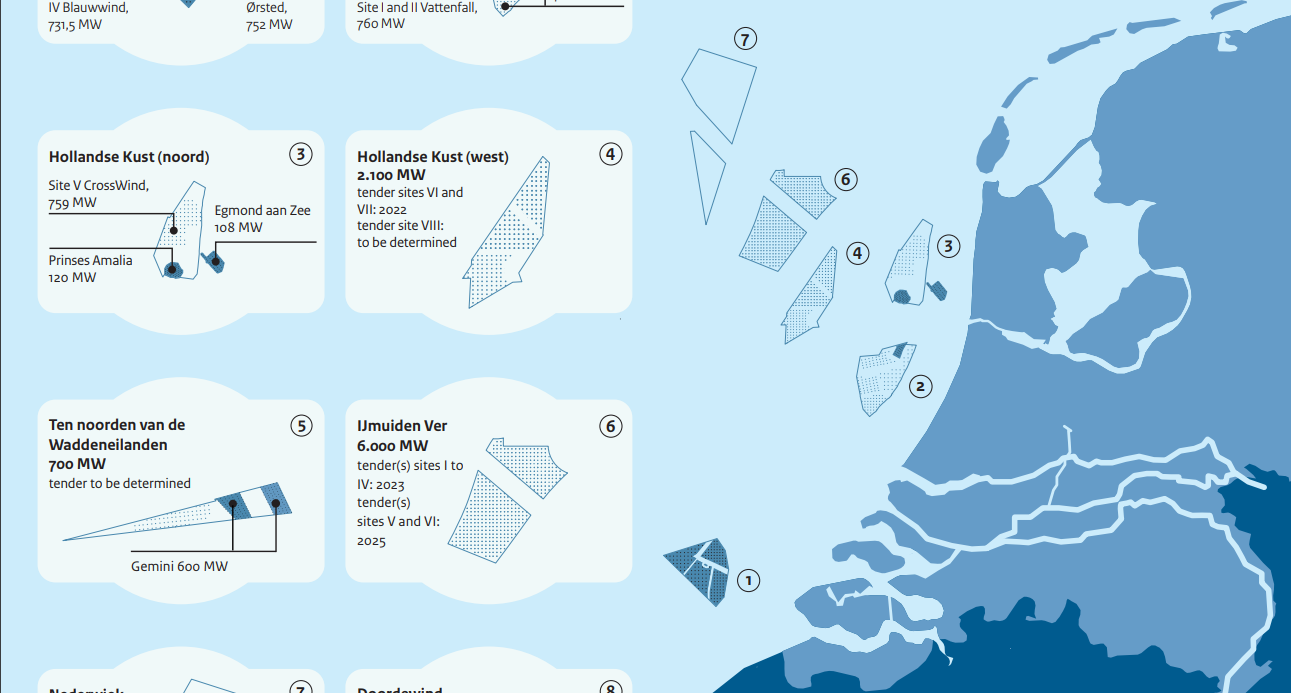 The Dutch Ministry of Economic Affairs and Climate Policy (EZK) plans to combine the first four IJmuiden Ver offshore wind sites for the purpose of putting them out to tender together. This means the sites III and IV will be auctioned next year, same as the sites I and II, instead of the initially planned 2025, with 4 GW of offshore wind capacity awarded in 2023.

If the Ministry’s plans move forward, this will be the biggest offshore wind tender in the Netherlands, offering 4 GW across the four sites, and will contain additional requirements, from ecological to responsible business stipulations.

At the beginning of November, the EZK sent a letter to parliament to announce how it, together with the Netherlands Enterprise Agency (RVO), plans to award permits under what would be the largest tender round ever organised in the Netherlands.

On 29 November, at a workshop organised during Offshore Energy Exhibition & Conference 2022 in Amsterdam, the Ministry detailed on the current plans for the tender, for which the application period is planned to open in the fourth quarter of 2023.

Combining HKW applications was not possible; Tendering 2×2 GW at IJmuiden Ver to enable economies of scale

The EZK and RVO are still working on all the intricacies of the upcoming IJmuiden Ver tender and are, along with expert appraisals and market analyses, drawing on the knowledge from the past tenders in the Netherlands and tenders in neighbouring countries, as well as input from the developers, to find the right settings.

While for Hollandse Kust West (HKW) it was not allowed to combine applications, IJmuiden Ver I-IV will most likely be pooled together in two 2 GW areas for the upcoming tender.

“We have decided to do this because we believe this will further enable economies of scale. This is also in line with the direction in which the international market is moving”, said Emelie de Wagt from the Ministry of Economic Affairs and Climate Policy (EZK).

Furthermore, the number of sites that can be awarded per bidding entity will not be capped in this tender, as the Ministry does not see any risk of excessive market power that should be limited, but it pointed out that it would keep a close eye on this aspect.

However, the number of applications a party or a consortium can submit per tender will be capped, in order to limit the risks and regulatory burdens for both the public and the private sector.

Financial bid likely to be capped higher than €50 million

The 4 GW tender next year will be based on comparative assessment and include financial bid as one of the requirements, along with security of realisation and contribution to the energy system, and several additional competitive criteria.

As for the financial bid, according to the EZK, it was decided to include this into the tender due to the significant value of these sites and also to safeguard competition.

The Ministry also expects the financial bid to be capped higher than for the still-ongoing Hollandse Kust West tender, where it was set at €50 million.

The decision on the amount for the cap for the financial bid will be brought based on the results of the Hollandse Kust West tender – under which the first site was recently awarded to RWE and the winner of the second site will soon be selected – as well as based on other information, including an independent appraisal and developments in neighbouring countries.

Financial revenue will be used to partially support integration in the North Sea so these offshore energy developments could be integrated with other activities in the North Sea.

During the workshop on 29 November, which saw all seats taken and majority of those attending being from developer companies, Emelie de Wagt also noted that the EZK is also being careful with the financial bid so as not to exceed within the design of the monetary bid, taking into account how it relates to other criteria and what is possible in the business case based on market analyses.

The additional criteria that will form the competitive element include ecology stipulations for at least two of the four sites, circularity and International Responsible Business Conduct (IRCB) criteria for all sites, and system integration, with details on the latter yet to be determined.

The offshore wind farms at the first four IJmuiden Ver sites are scheduled to go into operation in 2028 and 2029, with sites III and IV to be commissioned first.

The IJmuiden Ver Wind Farm Zone also comprises two further sites that were designated to accommodate additional offshore wind capacity earlier this year, bringing the total capacity at the zone to 6 GW, as the Netherlands works to achieve 21 GW of offshore wind by 2030 with additional development areas.

An application period for the development of IJmuiden Ver sites V and VI is planned to open in 2025.