The Ocean Cleanup Tweaking Wilson to Prevent Plastic from Escaping 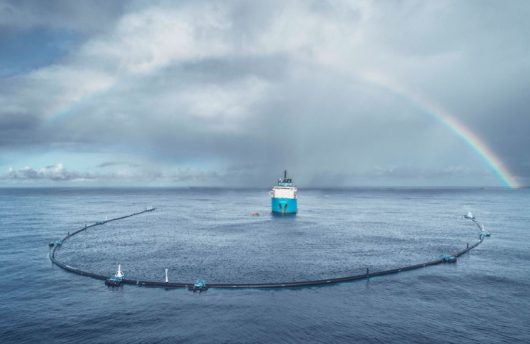 Initial observations find that plastic sporadically exits the System 001, dubbed Wilson, which was deployed by the Dutch environmental organization The Ocean Cleanup four weeks ago in the Great Pacific Garbage Patch (GPGB).

The system, comprising a 600-meter-long U-shaped floating barrier with a three-meter skirt attached below, received the all clear to head for the garbage patch on October 2. It is designed to be propelled by wind and waves, allowing it to passively catch and concentrate plastic debris in front of it.

Boyan Slat, founder and CEO of the organization, said that during this time numerous observations were made regarding the bahavior of the system and there is a need for some final fine-tuning before it can start harvesting plastic at full potential.

Namely, the crew deployed to monitor the system’s behavior, and analyse data, found that for the most part, the system is behaving as predicted.

Plastic density in the GPGP is in line with expectations; but, the data is limited and is yet to be fully verified as more time is needed to be spent in the GPGP for a broader perspective to be made.

As informed, so far there have been no interactions observed with the marine life.

However, the main concern at the moment is that plastic remains in the system for a relatively short time.

It is also possible that the vibrations in the ends of the U-shape could be creating a type of ripple-force field that repels the plastic away from as it nears the mouth of the system.

“We will address the speed difference by opening the U-shape about 60-70 meters wider. Doing this should, theoretically, have two effects on the speed of the system; firstly, it will increase the surface area of the system exposed to the wind and waves, which are the driving forces of the system. Secondly, by widening the span, we think this could also reduce the propulsive force caused by the undulating ends, simply because it would not be directed straight into the motion direction of the system anymore,” he added.

To perform the extension,  it is planned to lengthen the closing lines which keep the cleanup system in its U-shape.

“We will perform the extension in several stages until we will (hopefully) reach the desired effect. As an increased span is expected to have a negative effect on the system’s ability to rapidly pivot when a change in wind direction occurs, we must be careful to not increase the span too much,” Slat added.

“While we are busy implementing this first solution, our team is continuing to analyze more data and test alternative solutions until the system is fully operational.”

Due to favorable weather conditions it is planned to implement the closing line extensions on Thursday, November 22.