Towards Smarter and Greener Decommissioning

Project and financing models for decommissioning are moving up oil and gas operators’ agenda worldwide as ‘lower for longer’ oil prices raise questions about how long aging assets can operate viably beyond their design lives.

The UK Continental Shelf (UKCS) is set for a wave of large, expensive projects in deeper offshore locations including Shell’s Brent field; Norway is also planning for future decommissioning. Collaborative discussions between operators, contractors and government agencies are preparing the way for cheaper but safe and sustainable decommissioning approaches and practices.

Netherlands is also pressing on with an industry-led approach, particularly for offshore platforms but also onshore. Italy faces a future decom challenge and shares with other countries a growing interest in ‘green decommissioning’.

“Decommissioning at large scale is a relatively recent development, but there is a growing knowledge base to make it cost-effective, safe and sustainable,” says Ben Oudman, director and country manager, Netherlands, DNV GL – Oil & Gas.

“There is a great scope to share expertise within the industry and to engage with regulators to achieve clearer guidance so that disruption to neighbouring fields can be minimized.”

The Netherlands expects its 50-year old oil and gas industry to produce for a few decades more but is progressing a national decommissioning plan. Twenty-three platforms have been decommissioned, but more than 150 platforms are still operating. Of 3,800 wells drilled by last year, 2,000 had been permanently abandoned, leaving 1,800 with an average age around 25 years to tackle in the future.

This scenario is shared by Energie Beheer Nederland (EBN) which has published a masterplan for decommissioning and re-use in association with Nogepa, the industry association representing the interests of oil and gas exploration and production businesses in the Netherlands.

“A large number of platforms will reach CoP (Cessation of Production) within the next five (5) years. We have seen lower investments in near field exploration and appraisal. We have also seen unit Opex going down. The decline in production, however, cannot be stopped and will continue. As a consequence, many platforms will inevitably reach their end of operational lifetime,” says Eric Kreft, Lead Decommissioning at EBN.

On behalf of the state, EBN co-invests as a non-operating 40 per cent partner in the exploration, production and storage of natural gas and oil.

“Netherlands offshore platforms are relatively small and in shallower water compared with those in the UKCS and Norway, making life easier regarding lifting, for example,” Beks observes.

“That said, besides approved re-use, national and international regulations still oblige operators to completely remove installations after cessation of production.”

In common with many other jurisdictions, Netherlands regulations for permanent abandonment of wells are prescriptive rather than goal-setting.

“They do not cover certain procedures common in current abandonment practices, such as casing milling,” Beks says.

“Change is coming, though. The regulator has been closely involved with Nogepa to develop new guidelines for abandonment, for example. A lot of collaborative work on decommissioning is kicking off in 2017, and we are pleased to have been able to contribute insights during the preparatory discussions and work, and on an ongoing basis.”

For more than a decade, DNV GL has contributed experience and insight on decommissioning worldwide, including in the Netherlands. The company has supported platform removal operations though desktop assessment, offshore supervision, and environmental and safety studies. During dismantling and removal of major topsides, it has conducted studies balancing efforts to control operational and technological risks across decommissioning phases.

Most recently, DNV GL published a risk-based Recommended Practice 1 that could halve the cost and enable smarter plugging and abandonment (P&A) of oil and gas wells. EBN calculates that P&A will account for USD 3 to 4 billion of the estimated USD 7 billion bill for decommissioning in the Netherlands.

“With this globally-applicable Recommended Practice, we are trying to challenge some work processes to persuade the industry to allow well-specific solutions,” says Beks.

“We need quality, maintaining a high safety level but at a reasonable cost, and a one-size-fits-all approach delivers neither,” he added.

“That said, regulators are clear that the industry must prove the benefits of a risk-based approach to well P&A. It is not enough to say it is cheaper; it must be safe. So, for example, DNV GL is working with operators to prove our methodology for locations including the Netherlands.”

The country also boasts early examples of converting platform infrastructure into artificial reefs for marine life, one example of ‘green decommissioning’. Oil and gas decommissioning expertise was applied recently to salvage and remove the Costa Concordia cruise ship wreck, the largest such operation in maritime history. Site remediation of the seabed following removal of subsea oil and gas structures was a vital element of decommissioning at Isola del Giglio, Europe’s biggest marine park and a Specially Protected Area of Mediterranean Importance (SPAMI) under the United Nations Environment Programme (UNEP).

In another example of green decommissioning, interest is growing in the concept of repurposing offshore oil and gas assets to support the development of renewable power in the transition to a sustainable energy future.

“The North Sea Area has 600 platforms, 5,000 production wells and 10,000 kilometres of pipelines that will need dismantling as exploration and production of fossil fuels will end,” Ben Oudman, director and country manager, Netherlands, DNV GL – Oil & Gas.

“Over the same period, 50-100 gigawatts of renewable offshore wind capacity will be installed, requiring significant investment costs in electricity cables and grid connections.”

In a recent presentation, Green decomissioning: Re-use of North Sea offshore assets in a sustainable energy future, Oudman suggested how to create a financial win-win from this situation.

“Convert power from wind farms to gas at old oil and gas platforms and transport the gas ashore via existing pipelines,” he says.

“That way, you convert fluctuating energy output from wind generation into a storable energy carrier, gas, and it could improve or maintain the capacity factor of existing pipeline infrastructure even as natural gas production rates decline.”

In support of the idea, Oudman cites calculations suggesting that transporting gas is around 20 times cheaper per kilowatt per 100 kilometres than transmitting electricity. 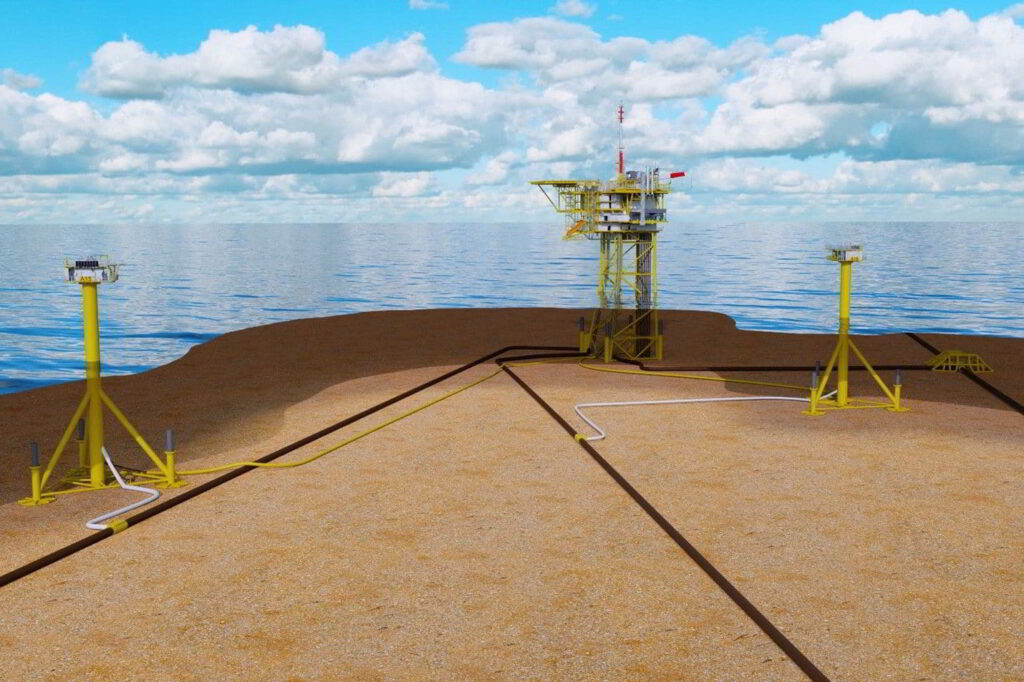