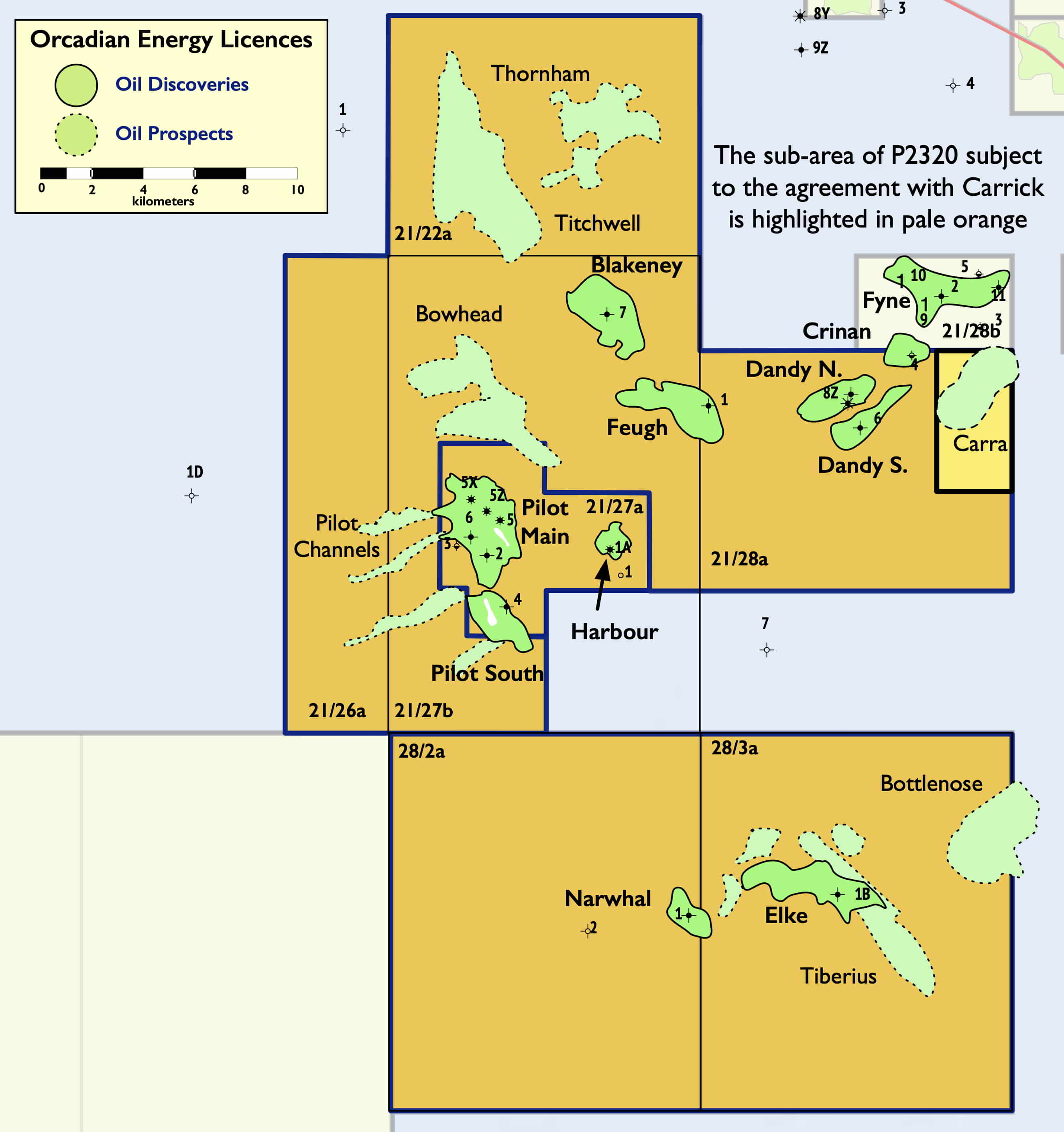 Photo: The sub-area of P2320 containing the Carra prospect; Courtesy of Orcadian Energy

Two UK-headquartered companies – Orcadian Energy and Carrick Resources – have executed a formal agreement for the farm-out of a prospect in the UK North Sea.

This deal follows the non-binding agreement, which the two players reached in October 2021. While announcing the execution of a formal agreement with Carrick Resources in respect of a sub-area of licence P2320, which covers the Carra prospect, Orcadian Energy outlined on Wednesday that under the terms of the sales and purchase agreement (SPA), the consideration for the transfer of the Carra interest is to be satisfied by the fulfilment of certain work milestones as there is no cash consideration.

In line with this, Carrick will review existing data, acquire a licence to, and reinterpret, the seismic data currently being reprocessed by TGS relating to the Carra prospect, and remap the prospect. On the other hand, once the updated mapping has been completed, Orcadian will – subject to North Sea Transition Authority approval – assign a 50 per cent interest in the sub-area of licence P2320, which contains the bulk of the Carra prospect, to Carrick.

The company pointed out that Carrick may withdraw from the agreement prior to the completion of the remapping of the prospect. Orcadian further explained that this work programme is anticipated to take four months and Carrick has agreed that after the transfer, it will then work up the Carra prospect to drill-ready status and manage a further farm-out process on the prospect.

Orcadian also elaborated that this agreement with Carrick will enable it to build upon the long experience of the Carrick team in this area and maximise the potential of this undrilled prospect.

Steve Brown, Orcadian’s CEO, remarked: “We are delighted to have signed the SPA with Carrick.  This SPA enables us to further de-risk and maximise value from our assets in a very cost-effective way while developing a drill-ready prospect on Carra.”

Lying to the East of the Crinan and Dandy discoveries and to the South of Fyne, the Carra prospect is contained in Tay and Cromarty sandstones, which lie on trend with Guillemot West. This is a stratigraphic trap associated with a clear amplitude anomaly defined by 3D seismic.

While the Carra prospect is undrilled and unexplored, internal estimates from Carrick indicate there is the potential for it to contain P50 recoverable prospective resources of 30 MMbbls of medium gravity oil. As Orcadian has not undertaken any exploration activities on the Carra prospect yet, there is no turnover or profits attributable to the Carra sub-area.

“Progressing Pilot and the prospects close to it remains our core focus whilst we continue to extract the maximum value on all our assets,” concluded Brown.

To this end, Orcadian Energy submitted a draft field development plan in June 2022 for the Pilot oilfield located in the UK North Sea to the North Sea Transition Authority (NSTA). This is the largest oilfield in the firm’s portfolio.

According to this plan, the field will be developed with an FPSO vessel and a pair of wellhead platforms with power provided by a floating wind turbine.