Back to overview
Home Fossil Energy U.S. and EU seal the deal for LNG supply as Europe seeks to cut Russian energy ties

The United States and the European Union have made substantial steps to ensure and strengthen European energy security, reduce reliance on Russian fossil fuels, and reduce Europe’s overall reliance on gas. As part of their plans, the U.S. will supply 15 billion cubic meters of LNG to the EU this year.

U.S. President Joe Biden arrived in Europe this week to attend the NATO summit and meet with European allies in light of Russia’s war in Ukraine, which started a month ago.

Ever since the attack started, the U.S. and its European allies have been working to reduce their dependence on Russian fossil fuels, with the U.S. completely banning the imports of Russian oil, liquefied natural gas, and coal as well as all investments in Russia. Last year, the U.S. imported nearly 700,000 barrels per day of crude oil and refined petroleum products from Russia.

On the other hand, the European Union member states developed an outline of a plan, which is supposed to make them independent from Russian fossil fuels well before 2030, starting with gas. This could reduce Europe’s demand for Russian gas by two-thirds before the end of the year.

Through the REPowerEU plan, the EU confirmed its objective to reach independence from Russian fossil fuels well before the end of the decade, replacing them with stable, affordable, reliable, and clean energy supplies.

As part of his visit, Biden met this week with the European Commission President, Ursula von der Leyen, in Brussels. In a push to reduce Europe’s dependency on Russian gas as quickly as possible and reduce Europe’s dependence on gas overall, Biden and von der Leyen on Friday reaffirmed a joint commitment to Europe’s energy security and sustainability and to accelerating the global transition to clean energy.

The U.S. and the EU underlined their commitment to meeting the goals of the Paris Agreement and achieving the objective of net-zero emissions by 2050, including through a rapid clean energy transition, renewable energy, and energy efficiency. They also emphasised that natural gas remains an important part of the EU energy system in the green transition, including by ensuring its carbon intensity decreases over time.

They established immediate cooperation to address the emergency energy security objective of ensuring appropriate levels of gas storage ahead of next winter and the following one. Therefore, they will immediately establish a joint Task Force on Energy Security to set out the parameters of this cooperation and execute its implementation. The Task Force will be chaired by a representative from the White House and a representative of the President of the European Commission.

The focus of this task force will be on several urgent issues. These include the U.S. ensuring additional liquified natural gas (LNG) volumes for the EU market of at least 15 bcm in 2022 with expected increases going forward.

Furthermore, the U.S. and EC will undertake efforts to reduce the greenhouse gas intensity of all new LNG infrastructure and associated pipelines, including through the use of clean energy to power onsite operations, the reduction of methane leakage, and the construction of clean and renewable hydrogen ready infrastructure.

The U.S. will work to expeditiously act upon applications to permit any additional export LNG capacities that would be needed to meet this emergency energy security objective and support the RePowerEU goals. Meanwhile, the EC will work with the governments of EU Member States to accelerate their regulatory procedures to review and determine approvals for LNG import infrastructure, to include onshore facilities and related pipelines to support imports using floating storage regasification unit vessels, and fixed LNG import terminals.

The EC will also work with the EU Member States and market operators to pool demand through a newly established EU Energy platform for additional volumes between April and October 2022 and, together with the U.S., encourage relevant contracting to support final investment decisions on both LNG export and import infrastructure.

The European Commission will work with the EU Member States toward ensuring stable demand for additional U.S. LNG until at least 2030 of approximately 50 bcm/annum.

Moreover, the EU is preparing an upgraded regulatory framework for the security of supply and storage. This will enhance certainty and predictability regarding the security of supply and storage needs and ensure closer cooperation within the EU and its neighbouring partner nations. The European Commission has proposed a regulation on energy storage to ensure that the existing storage infrastructure is filled up to 90 per cent of its capacity by 1 November each year, with specific phase-in provisions for 2022.

Another focus of the task force includes expediting planning and approval for renewable energy projects and strategic energy cooperation including in offshore wind technologies and developing a strategy to accelerate workforce development to support the rapid deployment of clean energy technologies, including an expansion of solar and wind.

In addition, it includes collaborating to advance the production and use of clean and renewable hydrogen to displace unabated fossil fuels and cut greenhouse gas emissions, including by investing in technology development and supporting infrastructure. 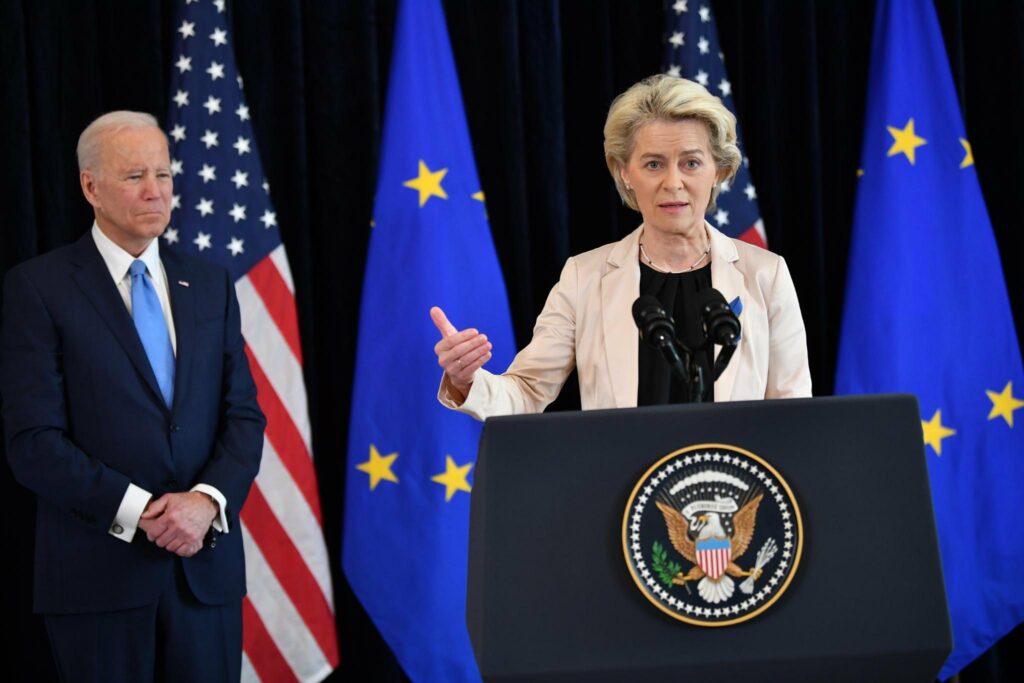 EU and U.S. condemn Russia’s use of ‘energy blackmail’ through actions like gas supply halt
Posted: 3 hours ago
EU sets out plan to tackle double whammy of dependence on Russian fossil fuels and climate crisis
Posted: 6 days ago
Premium
In focus: Europe’s political balancing act within offshore energy realm
Posted: 4 days ago
EU to phase out all Russian oil imports ‘in orderly fashion’
Posted: 20 days ago
U.S. bans Russian-affiliated ships from its ports
Posted: 29 days ago