In part to determine how planned offshore wind farms could affect maritime navigation, the U.S. Coast Guard is undertaking a large-scale study of government, commercial and pleasure boat traffic up and down the Atlantic coast.

While the Coast Guard routinely looks at vessel traffic on a port-by-port basis, the study that’s now under way is the first to examine waters beyond port entrances, from Maine to Florida. The outcomes could be far-reaching, including recommendations for new international agreements or vessel-routing measures where none exists.

As part of the investigation, officials are asking for input from maritime industries, commercial watermen and recreational boaters who operate within 200 nautical miles of the East Coast.

“What we’re doing is identifying all of the uses of the water now so we can plan for the future,” said John Walters, chief of the waterways management section for the Coast Guard’s 5th District, based in Portsmouth.

Officials decided to launch the examination about a year ago, around the time that the U.S. Department of the Interior announced so-called “wind energy areas” off the coasts of several Atlantic states, including Virginia. No offshore wind farms are operational yet, but more than a dozen are at various stages of development.

While it is the Interior Department’s responsibility to oversee them, it’s the Coast Guard’s job to ensure safe access to and from U.S. ports. It became clear that a comprehensive study was needed, Walters said, especially in light of other potential uses that have been discussed for East Coast waters, such as oil and gas drilling and manganese mining.

To carry out the examination, officials are relying largely on information gathered from an automatic tracking system that is used by many vessels and feeds data on their individual positions, courses and speeds.

Additionally, the Coast Guard is seeking written guidance from the public. It issued its first call for input in May, noting that some of the wind energy areas “are located in or very near the traditional routes used by vessels in foreign trade and on Atlantic coastwise transits.”

The Coast Guard added, “The impact to safe and efficient navigation appears to be significant, although not yet characterized.”

Offshore wind developers expressed worry that their projects could be stalled.

“If navigation and offshore wind interests are not properly balanced, the impacts to offshore wind could be quite significant,” wrote Jim Lanard, president of the Washington, D.C.-based Offshore Wind Development Coalition. “While the right to navigation may be ‘paramount,’ this does not mean that shipping routes should be laid down without consideration of other important uses.”

On both sides, much of the feedback was broad.

“We got a lot of general comments – things like, ‘We’re glad you’re studying this. We have concerns,’ “ said Emile Benard, with the Coast Guard’s Atlantic Area.

So this month, officials put out another, more detailed call, including a list of specific questions for stakeholders: How are your coastal tug and barge routes affected by weather? Do you regularly transit coastal waters in a recreational yacht? If yes, how far offshore is your typical route? What are the pros and cons to the Coast Guard designating traffic routes? Should there be separate lanes for different types of vessels and for vessels traveling in opposite directions? Should their use be mandatory?

The Coast Guard will accept input through Jan. 31. After that, it will compile its findings into a report that, ideally, will provide a comprehensive picture of how coastal waters are being used.

Benard said the report also might include recommendations for significant changes, such as new vessel routing measures – or for no changes at all. 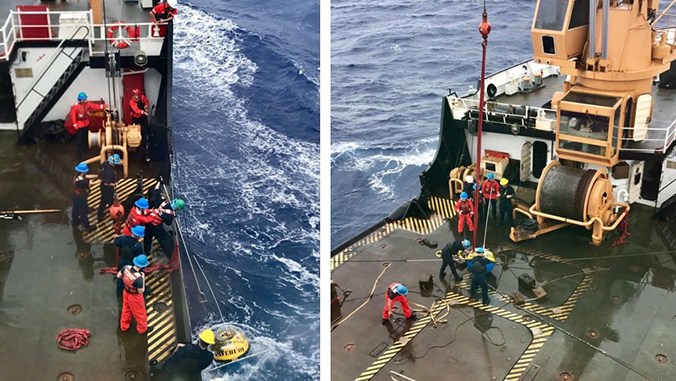