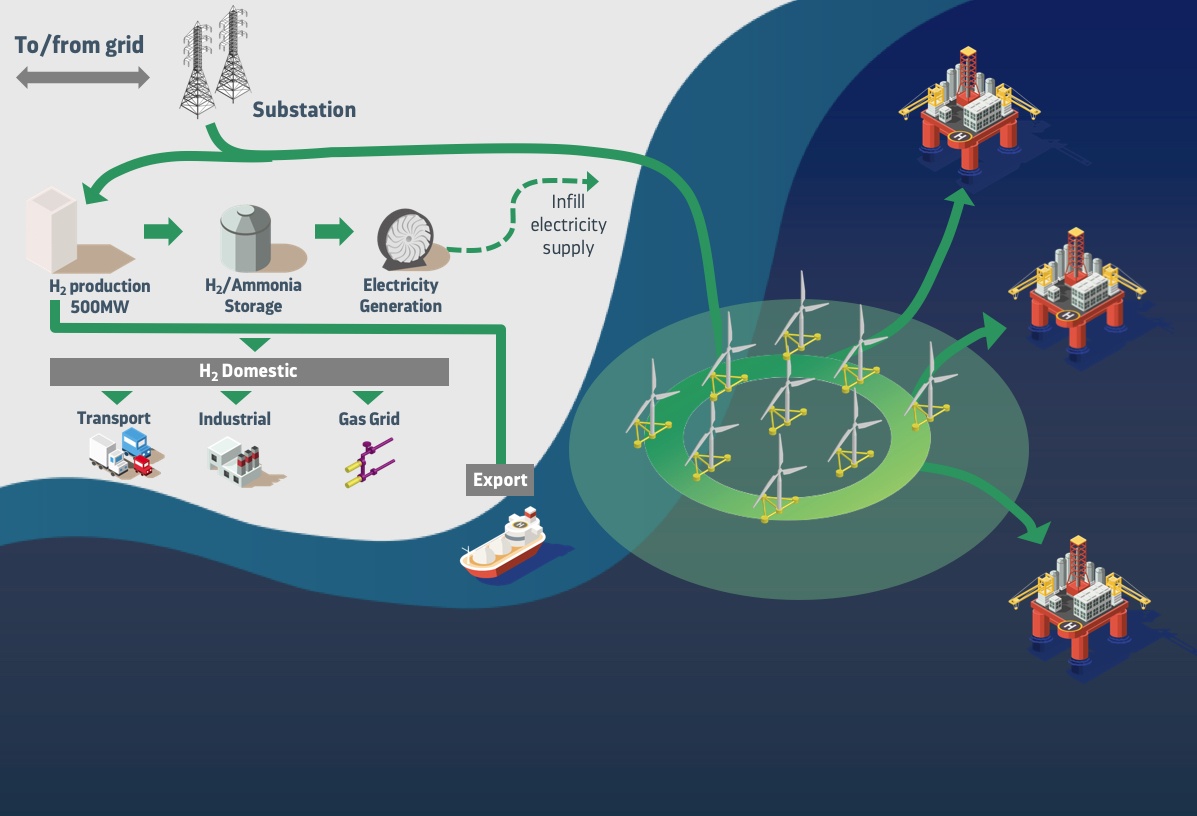 Cerulean Winds, a green infrastructure developer, has revealed a plan to accelerate the decarbonisation of oil and gas assets through an integrated 200-turbine floating wind and hydrogen development that would shift the dial on emissions targets and create significant jobs.

The £10 billion ($14.2 billion) proposed green infrastructure play would have the capacity to abate 20 million tonnes of CO2 through the simultaneous North Sea projects West of Shetland and in the Central North Sea, Cerulean Winds revealed in a statement on Tuesday.

The venture is now calling on UK and Scottish governments to make an ‘exceptional’ case to deliver an ‘extraordinary’ outcome for the economy and the environment. A formal request for seabed leases has been submitted to Marine Scotland.

Cerulean Winds is led by serial entrepreneurs Dan Jackson and Mark Dixon, who have more than 25 years of experience working together on large-scale offshore infrastructure developments in the oil and gas industry. They believe the risk of not moving quickly on basin-wide decarbonisation would wholly undermine the objectives set out in the recent North Sea Transition Deal.

Also, the UK government pledged that high-skilled oil and gas workers and the supply chain would not be left behind in the transition to a low carbon future.

Dan Jackson, founding director of Cerulean Winds, said: “The UK is progressing the energy transition, but a sense of urgency and joined-up approach is required to enable rapid decarbonisation of oil and gas assets or there is a risk of earlier decommissioning and significant job losses.

“Emissions are quite rightly no longer acceptable, but with emissions penalties and taxes coming, the UK oil and gas industry’s role in homegrown energy security during the transition could be threatened unless current decarbonisation efforts can be greatly speeded up. The consequences of not moving quickly enough will be catastrophic for the economy and the environment”.

The Cerulean leadership emphasised it has Tier 1 contractors in place to deliver the UKCS backbone development and has engaged the financial markets for a fully-funded infrastructure construct.

The proposed development involves over 200 of the largest floating turbines at sites West of Shetland and in the Central North Sea with 3GW per hour of capacity, feeding power to the offshore facilities and excess 1.5 GW per hour power to onshore green hydrogen plants.

It also involves the ability to electrify the majority of current UKCS assets as well as future production potential from 2024 to reduce emissions well ahead of abatement targets.

Furthermore, it includes a 100 per cent availability of green power to offshore platforms at a price below current gas turbine generation through a self-sustained scheme with no upfront cost to operators.

In addition, it involves the development of green hydrogen at scale and £1 billion hydrogen export potential and no subsidies or CFD requirements and hundreds of millions of pounds to government revenue via leases and taxation through to 2030.

Cerulean noted it has undertaken the necessary infrastructure planning for the scheme to ensure the required level of project readiness, targeting financial close in 1Q 2022. The construction would start soon after with energisation starting in 2024. An Infrastructure Project Finance model, commonly used for major capital projects is being adopted.

Allan Baker, Global Head of Power Advisory and Project Finance, commented: “The Cerulean UKCS decarbonisation project has the potential to meet all of the basin’s transition needs by reducing oil and gas emissions as quickly as possible whilst also introducing large scale green energy”.

Tim Hoover, Managing Director, Project Finance Investment Banking at Piper Sandler added: “The Piper Sandler investment bankers in the UK and in the US have partnered with Cerulean’s leadership over the last year to develop the UKCS decarbonisation model and we are pleased that it is now at the regulatory approval stage; it is a scheme that understands the needs and requirements of the financial markets to make it bankable”.

Cerulean estimates that the current 160,000 oil and gas jobs can be safeguarded and 200,000 new roles within the floating wind and hydrogen sectors will be created within the next five years.

Dan Jackson added: “We have a transformative development that will give the UK the opportunity to rapidly decarbonise oil and gas assets, safeguard many thousands of jobs and support a new green hydrogen supply chain.

Jackson continued: “The decision to proceed with the scheme will ultimately rest with the Scottish Government and Marine Scotland and their enthusiasm for a streamlined regulatory approach. The ask is simply that an exceptional decision is made for an extraordinary outcome. We are ready to deliver a self-sustained development that will decarbonise the UKCS and be the single biggest emissions abatement project to date”.

Premium
Will energy infrastructure emerge as an ace up Europe’s decarbonisation sleeve?
Posted: 13 days ago
Premium
How likely is the divorce from gas, as the emerging love affair with hydrogen stakes its claim?
Posted: 28 days ago
Natural gas and hydrogen storage ‘fundamental’ to tackling energy crisis and decarbonisation
Posted: 5 days ago