Entrusted with maintaining 1,000 miles of channels along the Gulf of Mexico, the USACE Galveston District partnered with the Conrad Blucher Institute for Surveying and Science at Texas A&M University Corpus Christi – manager of TCOON– to gather data necessary to convert its tidal datum from Mean Low Tide (MLT) to Mean Lower Low Water (MLLW), a uniform chart datum widely accepted by mariners and used to calculate vessel-under-keel clearance when transiting ship channels and other navigable waterways.

“Tidal data collected and disseminated by the TCOON (a cooperative agreement among the USACE Galveston District, National Oceanic and Atmospheric Administration, Texas General Land Office and Texas Water Board) will be used in the conversion to MLLW slated for spring 2013,” said USACE Galveston District Chief of Navigation Chris Frabotta. “The conversion to MLLW is guided by updates in legislation and Corps regulation, to allow for nationwide consistency with NOAA charts as required by the Water Resources Development Act of 1992.”

An annual multi-agency meeting will be held at the USACE Galveston District’s headquarters July 19, 2012, to discuss ongoing operations and maintenance of TCOON and other initiatives including the Corps’ conversion to MLLW.

“The Corps implements consistent methodologies using state-of-the-art technology to ensure the most accurate information is used in coordination with its navigation projects,” said Michael Sterling, Ph.D., chief of the USACE Galveston District’s Hydraulics and Hydrology Branch. “With sea level change and high historical rates of subsidence along the Texas coast, providing water level relative to MLLW will provide a consistent reference to the changing water surface.”

According to Sterling, tidal data gathered to establish the MLLW standard is crucial to the Corps’ operations and maintenance program on the Texas coast.

“This is an elite system of platforms collecting tidal data records using MLLW datum. However, additional tidal gauges are needed to determine MLLW in unmonitored areas, particularly along the Gulf Intracoastal Waterway,” said Sterling. “To relate MLLW to the currently used MLT datum, each tidal gauge needs to be referenced to surveyed land benchmarks.”

With the nation facing a series of budget reductions, the USACE Galveston District actively seeks to strengthen partnerships to more efficiently provide vital public engineering services to the nation.

“Established as an entity of the State of Texas in 1991, TCOON data collection began in support of the Natural Resources Act to collect water level and meteorological data along the coast of Texas,” said James Rizzo, Assistant Director of Operations, Division of Nearshore Research at Texas A&M University Corpus Christi. “Realizing the data collected by the network followed all NOAA standards, the Corps became a major partner with TCOON as the information supported surveying and dredge maintenance projects.”

According Rizzo, the partnership of all TCOON sponsors is invaluable, as not one agency in the network could create the data on its own without the technical knowledge and financial support of each respective organization, saving taxpayers upwards of $1 million annually in maintenance costs each year.

“Each agency supports the network with financial contributions, reducing the amount each agency must commit while still having the data from all stations available for use on their respective projects,” said Rizzo. “As the network has evolved over the past 25 years, it’s difficult to place a cost on TCOON; however, it’s estimated that replacing the network would be in the millions.”

“With Texas ports ranking first in the nation in waterborne commerce and handling nearly 17 percent of all of the nation’s port tonnage, it’s imperative the Corps execute its mission of keeping waterways open for navigation,” said Frabotta. “The information supplied by the network provides invaluable navigation-related data that enables the Corps and our stakeholders to keep cargo moving along the Texas coast and supply commodities to the nation.”

According to Frabotta, the Galveston District is responsible for maintaining federal navigation channels for four of the top 10 ranked ports in the United States with respect to tonnage.

“We understand the national, regional and local significance that waterborne commerce has on the nation and the State of Texas and we work diligently to ensure safe and reliable channel availability,” said Frabotta. “The USACE Galveston District monitors and maintains the federally-authorized navigation channels along the coast of Texas, removing approximately 30-40 million cubic yards of shoaled sediment at a cost of approximately $100 million per year.”

The USACE Galveston District was established in 1880 as the first engineer district in Texas to oversee river and harbor improvements. Since then, the district has expanded its mission to provide vital public engineering services in peace and war that strengthen our nation’s security, energize the economy by keeping waterways open for navigation and commerce, and reducing risks from disasters. 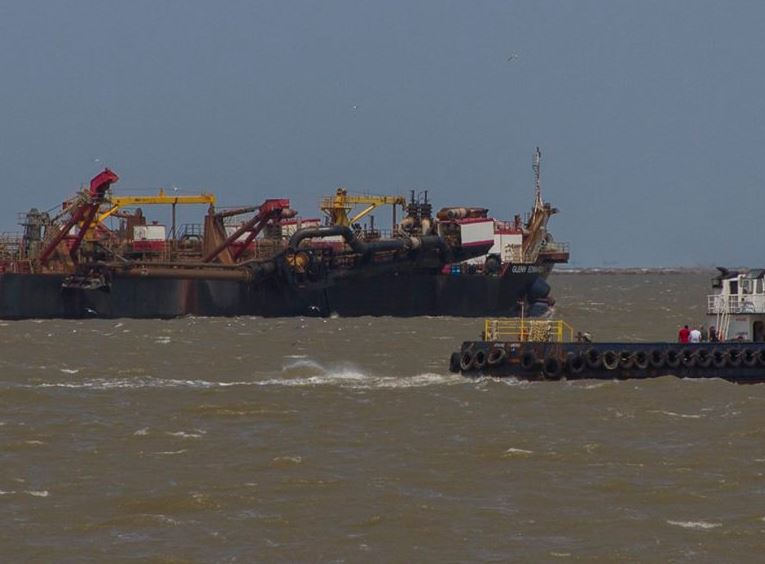