The engine’s advanced high pressure diesel ignition technology will provide significant fuel efficiency gains compared with current natural gas products. Combined with the company’s previously announced offering of compressed natural gas (CNG)-powered Volvo VNM and VNL model daycabs, the new engine will provide customers with a complete range of natural gas-powered transportation solutions. Volvo is also testing another fuel that can be produced from natural gas, DME (dimethyl ether), which has the potential to become an attractive alternative for the North American market.


“Despite the near-term infrastructure questions regarding widespread adoption of natural gas as a heavy-duty truck fuel, it’s clear this segment will grow over the next several years,” said Ron Huibers, president of Volvo Trucks North American Sales & Marketing. “We’re already delivering factory-built CNG-powered trucks, and as the long-haul fueling infrastructure develops, the advanced technology in our new LNG engine will provide increased range and improved fuel efficiency in a seamlessly integrated Volvo powertrain.”

The engine will accomplish these savings without sacrificing power, torque or fuel efficiency, all of which are critical attributes for on-highway operations. The Volvo Group was the number one supplier of 13-liter heavy-duty engines to the combined U.S. and Canadian market last year, and the same vertically integrated approach that has made Volvo a global powertrain leader is being applied to the development of the new engine.  The company’s proprietary Volvo I-Shift automated mechanical transmission also will be available for customers to specify.

The Volvo Group has conducted hundreds of thousands of miles of customer field testing of trucks equipped with DME, which can be produced from natural gas. The strong results – from ten vehicles operating in a variety of applications in Europe – indicate DME holds much promise as a heavy-truck fuel, and could become a viable alternative in North America to CNG or LNG when it comes to performance, environmental impact, safety and distribution.

DME mirrors the exceptional performance qualities and energy efficiency of diesel while significantly reducing GHG emissions. It is an excellent compression ignition fuel which, like diesel, requires no separate ignition mechanism. Unlike LNG, it does not require cryogenic temperatures; it is handled like propane, with tank pressures of 75 psi (vs. 3,000 psi for CNG), and it is non-toxic. DME burns with a blue flame and requires no diesel particulate filter. DME packages densely enough to allow long range transports or to allow room for vocational truck equipment on the frame.

“Since we adopted Environmental Care as a core value in 1970s, Volvo has dedicated the resources necessary to lead in alternative fuel technologies,” Huibers said. “We demonstrated in 2007 our ability to run vehicles on seven different fuels, and we continue to refine our work with a variety alternative fuels and drivelines.  Our comprehensive ‘Blue Power’ strategy – including CNG, LNG, and potentially DME – means we’ll have a complete range of natural gas solutions as the infrastructure develops.” 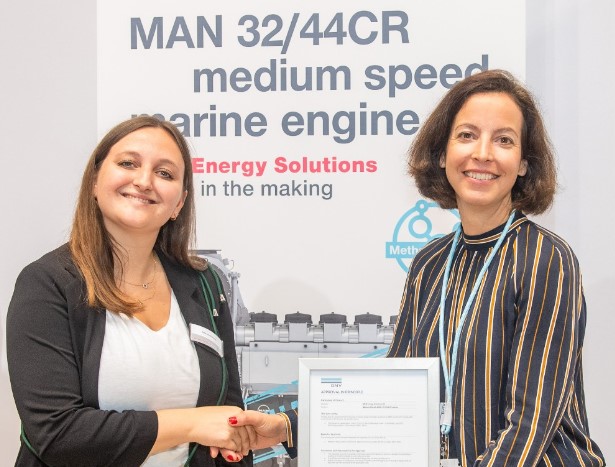